Top of the bill: Gladys and Henry

Another photo from the wonderful White studio of New York.

I'd never heard of a show called The Society Buds, neither did the names Clark and Bergmann (sic) mean anything to me.That of Jesse Lasky, of course, did, so, for all that this looked like a musical comedy picture, I guessed it probably came from a revue or even a variety show. But I thought I would just have a wee investigate ... Well, that wee investigate has led me down pathways unfamiliar. Into the fascinating world of what America oddly called 'vaudeville'. And there I have spent the whole of my day ... 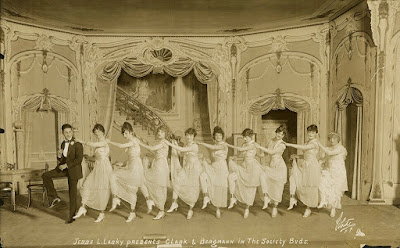 The photo comes from the years 1914-1916. Those were the years during which Henry Bergman and Gladys Clark (Mrs Bergman) headlined the upmarket troupe -- two stars, eight girls, two comedy players, expensive scenery, costumes, arrangements -- playing a kind of potted musical-comedy in vaudeville houses around America. And with notable success. For some thirty years they were a top-billed fixture on variety bills, with just occasional ventures into the theatre, notably in Broadway's The Passing Show of 1917.
So, who were they? Well, in spite of his name, Henry was a kosher Brooklynite, born of a Dutch father and a German-American mother (Mary née Mallander) on 20 July 1887. And if I thought he would be easy to sort out, I was wrong. There seem to be Henry Bergmans all over the place in American 19th-20th showbiz and more than one respectable writer has confused one with the other! Gladys, in spite of the fact that her name was neither Gladys nor Clark, and that her tombstone lies as to her date of birth, proved much easier to extrude from the past. And her past was a little longer than Henry's, and rather eventful.

Ann McMahon was born in Selby, Yorkshire 7 May 1881, the daughter of a Bermondsey bricklayer named John McMahon and his wife Ellen née Flatley. I don't know why, or exactly when, all or part of the family McMahon -- Margaret, Joseph, John, Ann -- headed for America. It seems to have been around 1887. Anyway, wherever they are, I don't pick up Ann again till 1899, aged 18. She is already an 'actress', has become Annie, appropriated a middle initial 'V' and is in Boston getting married. No, not to Henry, who was at that date only 12 years old, but to a 33 year-old 'actor' named Frank Fisher from Allegheny. A year or so earlier, Frank had been doing the vaudevilles with another wife, Nettie (m Philadelphia 15 October 1889) whose name seems to have been Clark, but who worked as Nettie Crowell 'descriptive vocalist'. In 1898, they were touring together with 'The Bohemian Burlesquers'. Its all a bit complicated, but Frank was half of an act which traded as 'Fisher and Clark'. But it seems that Clark was male, and named George. The trade sheets were curiously wary about describing the act. Anyway, by 1899 Nettie and George were dead or gone, and Frank married Ann (Boston 21 May 1899) who thereafter became Gladys Clark. So the name of the act continued, and all seemed hunky dory until the couple reached Indianapolis in 1902 ..

'If the audience at the Grand Opera House misses one of the performers who is scheduled to appear, it will, perhaps, not be inclined to complain when It learns that the missing actor lies in his bed at the Lorette Hotel bleeding his life away. It is from the first act on the bill, that of Fisher and Clark, that the man is missing. He did a tramp specialty and some acrobatics, but now only the wife appears, sings two or three songs, does a hasty, but graceful dance: bows to the applause of the audience and hurries rapidly away to the bedside of her husband. If there are those in the audience who are disposed to be critical of the performance of Gladys Clark they may be kinder in their judgment when they learn that for thirty-six hours the little woman has not slept and has hardly eaten. Frank Fisher and Gladys Clark were married about three years ago, and they have been playing together on the vaudeville stage ever since. Last week they played In Chicago, leaving there Sunday night for Indianapolis. When Mrs. Fisher (the 'Miss Clark' is a stage name) woke in the sleeper, it was to find her husband covered with blood and nearly insensible. She managed to have him conveyed to the hotel, when it was found that he was bleeding from the gums, suffering from a rare and peculiar affliction. After some effort the bleeding was stopped, and Fisher and Clark headed the Grand's bill all right at the afternoon performance Monday. After the matinee the bleeding started again and Dr S H Malpas was called in. He pronounced the disease haemorrhagic diathlala, but the plain English of it was that the man was bleeding from the gums, and the flow of blood could not be stopped. All Monday night, with only brief Intervals of respite, Fisher bled. At times the flow was slow; at times the blood rushed forth in torrents; always it kept on steadily. Of course, it was out of the question for Fisher to appear yesterday afternoon, so Manager Zelgler was notified and requested to cancel the engagement. Instead. Mr. Zelgler realised that with the man ill, the couple would need all the money they could make, so he told the woman to go on by herself and do what she could to entertain the people, certain the audience would be indulgent if it only knew the facts. So yesterday afternoon Gladys Clark appeared alone, sang three songs, did a little dance and went back to her nursing... Gladys Clark is a young woman, alone in a strange city. Almost tired to death from loss of sleep and from bitter anxiety she still watches faithfully by the bedside of her husband ...'

Frank survived. The act went out again .. but sometimes it was just 'Gladys Fisher' or 'Gladys Fisher Clark'. In 1905 I spot them with Miner's American Burlesquers playing A Yankee Doodle Girl ... Well, I guess Frank died and the trades just didn't notice. He certainly disappears around 1906. And in 1907, she is still featuring with the 'American Burlesquers', in shows such as Miner's Mixed Pickles, but now alongside Henry Bergman. Bergman later said they had been wed at Camden NJ in 1906, so maybe the were. He would have been nineteen. But they got it right. They would sail past their golden wedding and now lie together in the churchyard at San Antonio, Texas, where they spent their final years. 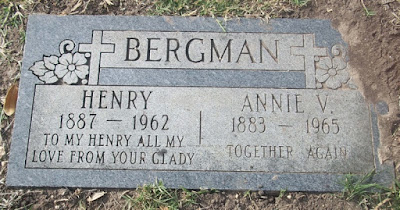 But before that came to pass, they had a highly successful quarter of a century in show business to share.

So. Backtrack. Henry. Lots of little stories were printed in the smaller paragraphs of the theatre papers mentioning Henry, and he even got a little obituary in the San Antonio press, on his death. They tales are oddly contradictory, and I can only think that the various Henry Bergmans had already got muddled up. Fact: he was born in Brooklyn, and can be seen there as a schoolboy with his mother (widow), sister Julia (paper-boxmaker) and brother William (silkweaver) in the 1900 census. In 1910 he is 'married, actor' with Mama and William. But no Gladys. Apparently before he became 'actor' he was a newsboy on the corner of Gates Avenue and Broadway.

They scored big in 1912 with a sketch entitled A Baseball Flirtation, topped that with a Lasky production The Trained Nurses ('If you don't want me, why do you hang around') 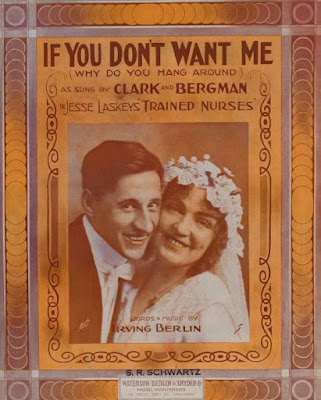 and then came The Society Buds. Thirty minutes of musical sketch on the full stage. The music included 'My Old Kentucky Home' and four new songs, credited to Messrs Leo Edwards and Irving Berlin. 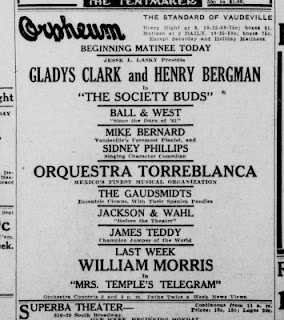 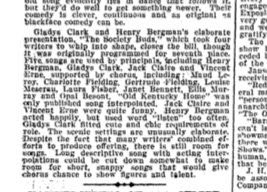 In 1916, they played a 'song revue' with an entire Berlin score, and his secretary Cliff Hess at the piano, in 1917 introduced 'new oriental ballad' 'From Here to Shanghai', by Berlin and in 1920 Berlin gave Henry a job in his office. However, the statement that he was 'credited with the introduction of many of Irving Berlin's tunes' including 'Always' (also claimed by others) and 'Remember' seems a touch excessive. 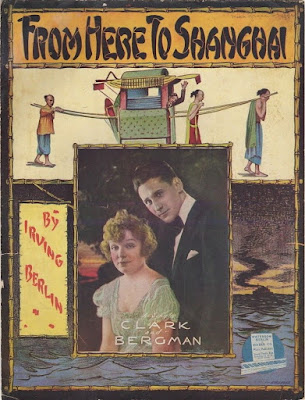 1917 saw them in The Passing Show performing 'My Yokohama Maid' (Tierney/Bryant), Ted Snyder's 'Meet Me At The Station' and playing sketches, but the following year the trade press sighed that they had been 'rescued from musical comedy' and were back in their natural habitat, topping major variety bills. And that they continued to do for more than a decade longer. Latterly, Bergman managed the Milton Weil music publishers. 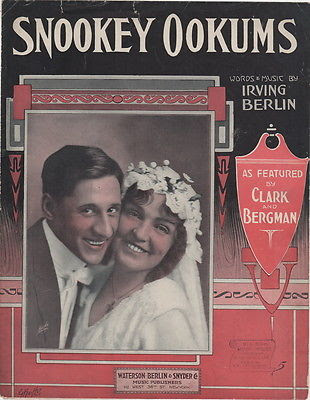 His obituaries claim that, as a 'veteran' he appeared in Roberta and 'starred in' The Great Waltz, but I don't see his name on the bills. They also claim that he appeared in Gus Edwardes kiddie shows, but Henry was 19 years old when Edwardes brought out School Days. A more possible tale says he made his 'debut' with Maurice Barrymore. Barrymore stopped performing when he went insane in 1901. When Henry was 13. The piece in question is named as Roaring Dan. I can't find it, but it may have been one of the sketches Barrymore played latterly in variety.

Then, there is/are the other Henry Bergman(s). As early as 1896 there's a Henry Bergman playing a dramatic Cuban in that early example of the strong-backed American musical comedy Lost, Strayed or Stolen. Is this the same Bergman (1868-1946) who went on to become involved in American silent films? I suspect so. Even though Wikipedia says that that Henry didn't start on Broadway until La Femme à Papa in 1899. And I also wonder if this Henry-pic which adorns wikipedia's article on the film actor, may not be their Henry, but ours ...? Maybe not. Bit much chin. 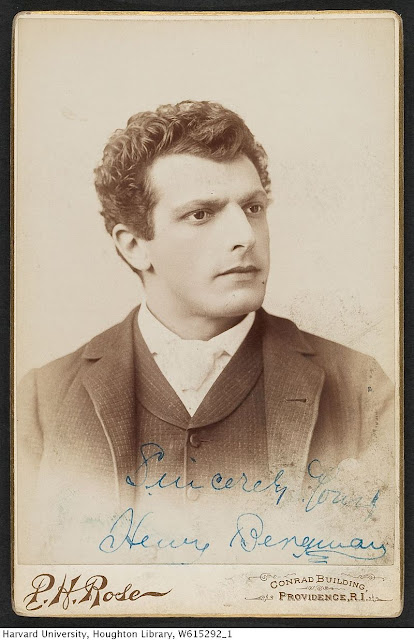 Anyway, it seems as if a little bit of mythology has got attached to our Henry, at least. He and Annie (who, of course, was some seven years older than he) settled, in their retirement from the stage, in San Antonio where he 'ran the Aztec, Texas, Broadway and State Theatres for the Interstate Circuit'. He died there 6 November 1962, and Annie-Gladys 31 March 1965.

One more little puzzlement. Annie's death certificate was signed by 'Joseph McMahon', garage manager. Joseph was some sort of relation. He was living with the couple in 1920, aged 10 and born Massachusetts. Ellen née Flatley, aged 74, is there too. Later, he is listed as their son. And an actor. So, why is he not Bergman? Well, I found Joseph's death certificate, too, and there he is said to be by Thomas McMahon out of Mary Waldron. Who? Who is Thomas? Ellen didn't have one of those ...  Suffice it that he was some kind of family, and that he stuck with Henry and 'Gladys' to the end ... 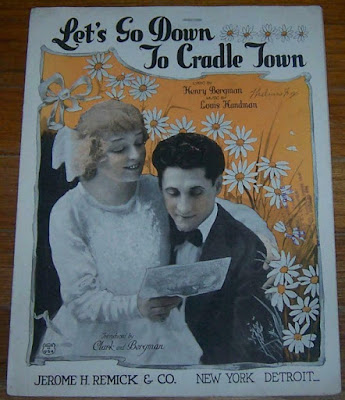 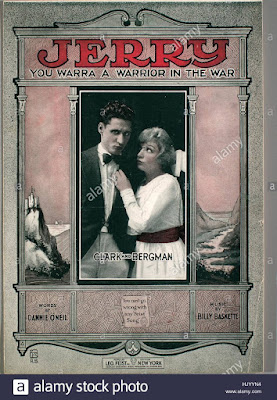 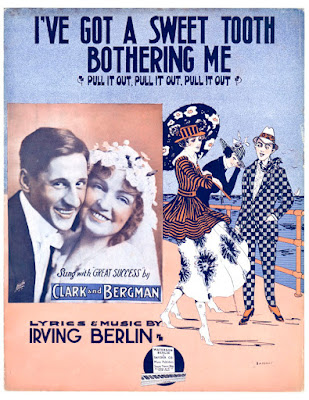 So now I know (almost) all about Gladys and her Henry ... I've enjoyed meeting them. I have a feeling that they were very endearing people ...

Posted by GEROLSTEIN at 4:08 PM

Joseph McMahon was the nephew of Glady (said Glad-ie). His parents were Thomas McMahon (Glady's brother) and Mary Waldron, who were also actors. I've really enjoyed reading your research! I'm close friends with Joseph McMahon's widow, Ruth and she has such fascinating information about Clark & Bergman. Thanks for sharing!

I'm at ganzl@xtra.co.nz if you want to contact me. They were huge fun!