Kurt In Kardio or, But I'm only here for a blood test! 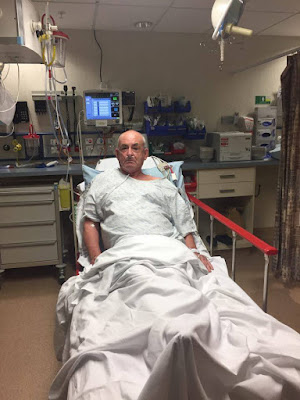 Night-time pain in the shoulder and chest. Called Carol the masseuse.

She did her thing and then suggested I have my doctor check it out...

Had to go to the doc for my pills anyhow, so up to Rangiora ... ECG and stuff, but its after 5pm so they can't do their blood tests. The Christchurch blood place can't do me because I'm too old (!) and once had a stroke. I have to go to Emergency at Christchurch Hospital.

Wendy turns off the stove and drives me to Hospital, where, instead of a swift blood-drawing, I find myself stripped, connected to machines, answering the same questions the doctor had asked me an hour earlier, and then .. waiting. Three hours of waiting, listening to the sounds of the truly afflicted and getting more and more annoyed.

Finally, the young and cheerful cardiologist came. Blood normal, doesn't seem to be a coronary thing, have I been pushing any heavy wheelbarrows recently?

So six and half hours after my visit to the doctor we are back at Gerolstein. Oh well, not much of an evening out, but at least I'm alive.


Posted by GEROLSTEIN at 1:24 PM No comments:

Persian Parrots or, a change of bookshelves ...

.
People's bookshelves are strange and storytelling things. They say you can read a person's character from his library. Or lack of it. But I think anyone looking at mine would be a little confused.  Certainly there are all my large stock of reference works, rendered these days rather useless by the Internet, my Dictionaries (favourite: French/Hungarian), a lot of Victorian plays, French (mostly) and English, a few favourite fiction works, from Vidal's Duluth to Catch me a Peacock and A Bullet in the Ballet, and, most often opened, a whole cabinet of books by family. Starting with more than a dozen each by brother John and myself. 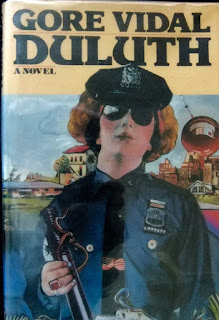 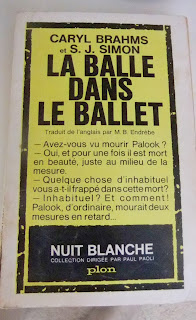 But why do I have so much Australiana on the bottom shelves? And, for goodness sake, some very odd books in German! Well, the Australian books were collected by my dear, late (Australian) partner. The German ones have descended to me from my father and my Austrian grandmother. Many of them are mountaineering books, but there are two 'strangers': a book of poems by 'Klabund' (Phaidon, 1924), which are said to be translated from the Chinese, and a book of Persian fables, published by Wolf of Vienna, in 1922. Prettily printed and illustrated, but strange things to be featured in a trunk of brought-from-Europe possessions. 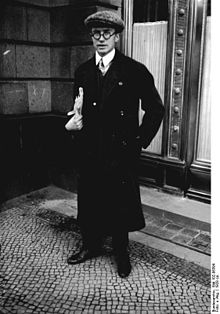 I hadn't heard of Klabund. But I've looked him up and he was a well-known young chap. 1890-1928. A tubercular poet of extreme tendencies, who wrote about Rasputin, Lucrezia Borgia and Mohammed, and who died young. I don't think I'll be brushing up my German to read him. But I'm a bit miffed that my Chinesiche Gedichte aren't listed amongst his worklist on Wikipedia. He sounds like the sort of bloke academics would adore researching. But why my nana? 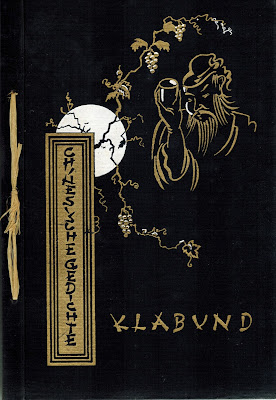 The other is a charmingly illustrated book of tales which seems to be a 1920s mini-equivalent of those wonderful French fairytale books of the previous century. Countess d'Aulnoy and so forth. This one would be worth a bit of German study, I feel. 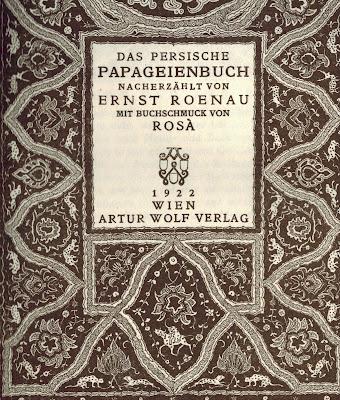 And it's so beautifully printed and published. Das Papageienbuch. By Ernst Roenau ... 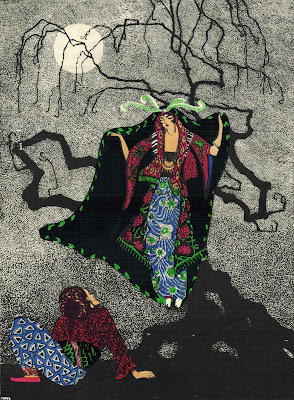 Penny drops. 'Roenau' wasn't a real Roenau, he was a Rosenbaum. Dr Ernst Rosenbaum. One of the bothers of famous the printing firm of Brüder Rosenbaum. He was my great-grandmother, Julie's, brother, and Pepi Gansl's uncle. And the book was printed by the Gesellschaft für graphische Industrie, founded and run by the Rosenbaum family. Oh, nana, why didn't you tell us ... all these years, it just sat there and your two writer grandsons never knew ... 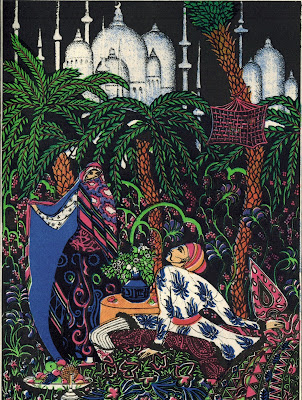 Well, there's only one thing to do. Das Papageienbuch has to come off the bottom back shelf and be promoted to the 'Family' cabinet! 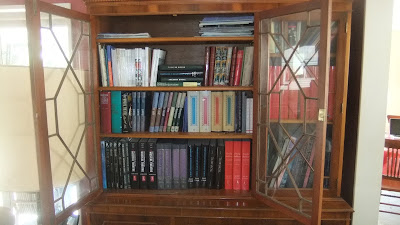 
The family is gradually sorting itself out. Today I picked up one of my family's 1920s photo albums. Sadly, as is so common, the pictures aren't labelled with information as to who's who. Years later, someone's inked in mother, father, grandmother, grandfather, Fred .. but I know who they are: what I want to know is who are the other folk in the snapshots? There's Onkel Fred, and Onkel Max, and Minna and her lawyer husband Richard Stern ... and oh golly! Look! Here's Hermine. The wedding-dress maker. Labelled! So she obviously remained an integral part of the family... 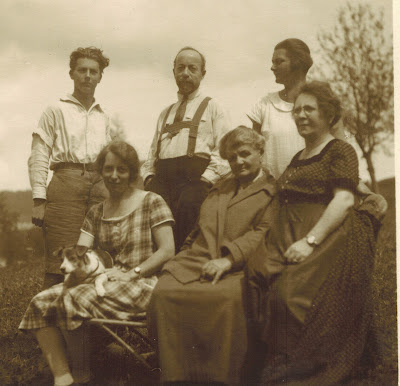 So there's my father, his Onkel Max, Nana Rudi .. front row Minni, my great-grandma Stojetz-Baumgartner and the mythological Hermine! Not really one of my direct family, but the daughter of great-great-grandad's second wife. Yay! One more down!

Hang on, who is Minni? Not Minna Stojetz: they're BOTH in the next photo. Sigh. You solve one question, and another presents itself ... 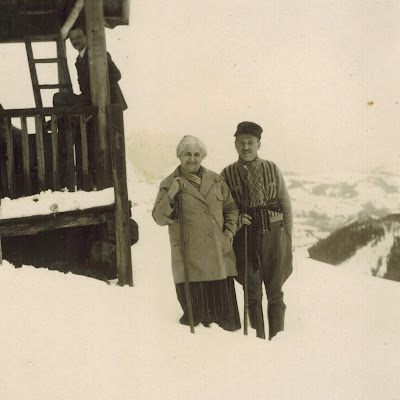 There's another question. My father told us that Max died in Hungary 'between the wars'. Yet one day, I guess, in the 1960s, I distinctly remember Rudi saying 'I shall write to Max' ... Mother heard it too ... is this something else we were not told ... is there another mystery here?

And what's this? A schoolgirl's autograph book. Rudi's. Begins in 1894 with Vater, Mutter, Grossmutter, Tante Hanni ... who????