Pioneers and pumpkins, Paris and Poles ...

An unsuccessful day of searching. Yes, sometimes I do have them.

This was my favourite find. 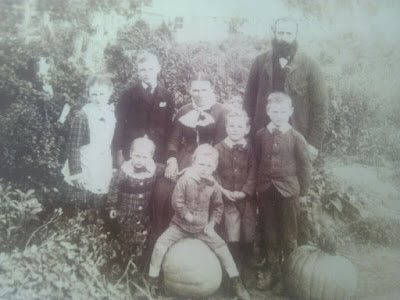 Pumpkins! It looks like our back paddock. And, so the vendor says, 'early settlers'. So, my eye having been caught, I looked to see if there were any provenance clues. Just one. The photographer. Standish and Preece of 218 High Street in my city of Christchurch. So, they are not that early settlers! Standish and Preece set up in, I believe, in 1885. But not in High Street: at 262 Montreal Street. However, the following year they moved to 218 and they were still there in 1910. In fact, they were still going in my youth. Without, of course, the original Messrs S and P, whose story can be read on that wonderful NZ photography blog at
http://canterburyphotography.blogspot.com/2008/08/standish-preece-christchurch.html
Actually, I believe I was photographed by the firm whose name still exists!
I should dearly know who this family are. But I guess I never shall. And I should dearly like to grow pumpkins that size here on the same Canterbury plains ..

I strolled on, page after page after page, and I bumped into this couple. It was easy to tell they were a couple: same mount, same studio, same ... name on the back? 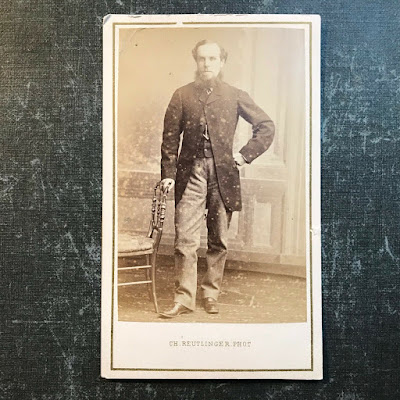 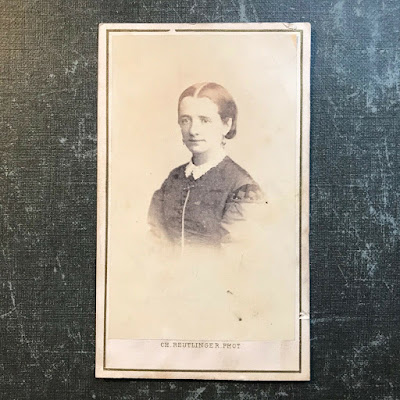 Rather an alarming looking fellow! But I'm stonkered again, because they've been photographed, I think, far from home. Their name is Cox. I think his back says A R Cox. Hers seems to say Mrs Alex Cox. 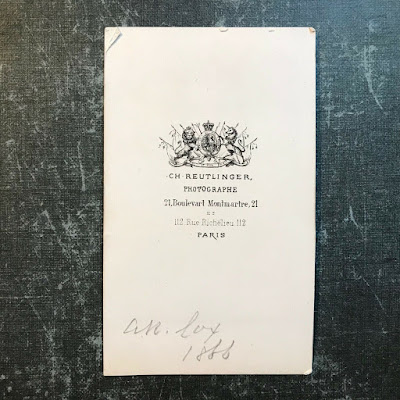 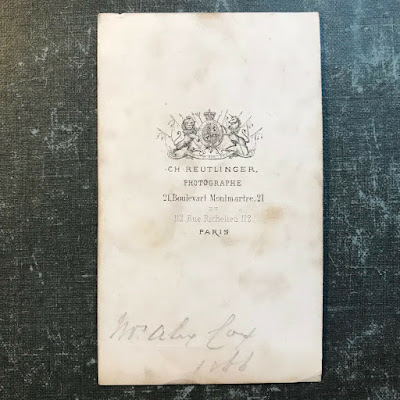 Date: 1866? English folk on holiday on the Boulevarts of gay Paree? Well, I've looked, and I'll look some more, but I can't find a 30-ish couple of Coxes that fit the bill ...  or is my deciphering wrong ..

I thought I'd better get one right, so for my next I took a really easy one.  Well, her name was scrawled right across the front of the card, and it was Constance Chandos Pole. Haha! How many of THOSE can there have been in C19th Wolverhampton! The answer is, Zeus dammit! ... TWO. And after several hours of trying, I'm damned if I know which of the two is the right one. And there are no relations floating around with her to give a clue, and no date ... for the two Connies were not contemporaries. 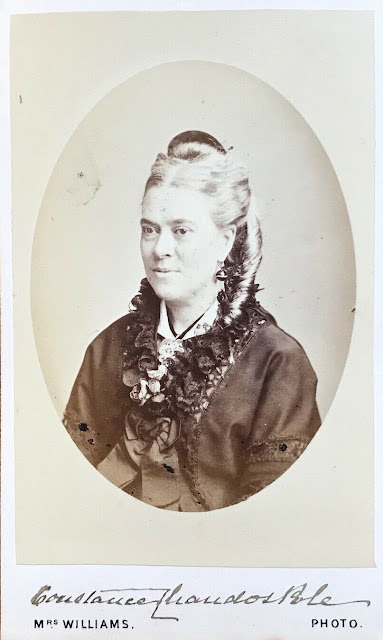 Connie I was Anne Constantia Hill, from Tettenhall, daughter of the county deputy lieutenant, until she married barrister Charles Chandos Pole in 1848. And she was Mrs Constance [Chandos] Pole until, after 13 years of widowhood, she died 21 March 1894, aged 66.

Connie II was Constance Marian Schwind (b Bowden Cheshire), daughter of a Brazilian merchant and landowner, and she became Mrs Chandos Pole in 1898, when she married another landed gent Christopher Askew [Chandos] Pole (b Radbourne 14 November 1867; d 18 January 1943) son of the rector of Radbourne. 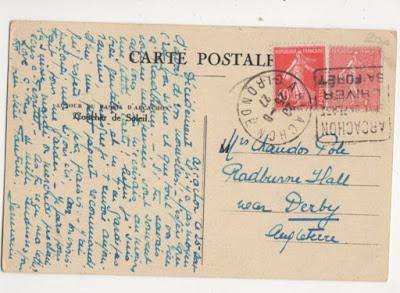 So, the question is ... when was the photo taken? Before 1894 or after 1898? Connie I or II? So I thought I'd be smart. I'd follow up the business address of Mrs (!) Williams. The back of the card said Talbot Place, Darlington Street. Guess what. There are TWO Talbot Places in Wolverhampton. But weeding through the censi I found that what became Talbot Place was a court off Darlington Street. And there, in 1861, are Thomas Williams, 21, tea-tray painter, his wife Sarah, 24, from Oaken Gates, Shropshire. By 1871, he is a 'master photographer' and they have a 2-week old daughter, by 1881 they have moved to ... Tettenhall, but are now both listed as photographers. But when they advertise for a 'lady assistant', the ad is in the name of Mrs Williams. For some reason, Mr W seems to have been rather cellophanic. And is that him advertising for a job in 1887?  I can't find them (yet) in the all-important 1891 census, but by 1899 Whitlock Brothers have taken over the studio, the Mrs Williams label has closed down, and in 1901 at The Gables, Penn Road, he lists himself as 'retired photographer'. Sarah lists herself as nothing. There's a story in the Williams family somewhere.

So. Connie II had very little time to get herself photographed under the Mrs Williams régime after she became a Pole. I know the inscription could be from a later date, but .. well ... until I found the beginning of the Whitlock era, I was favouring her. Look at that Chandos 'C', is that an affected signature or a typo? I just don't know. I reckon a signature. Date me a photo!

Me, I'd date the picture from exactly the four year period when there was no Connie Pole. But by then Connie I would have been in her fifties. And Connie II not a Pole!  Argggggh! Carbon dating needed here. What's your vote?

PS Connie II lived until 1954. Her husband, son (Captain RN, d 9 February 1943 aboard his ship Pacific), and daughter Mary (died in a car crash 3 weeks after her wedding) had all predeceased her ... so where, I wonder, did this photo come from...

I would be really interested to understand if this is Constance II? Constance Marian Chandos-Pole lived in my house when she died in 1954 (I am tracing my house) - did you get any confirmation?

Alas, no. But something else about her surfaced on ebay recently ...