Side by Side by Christchurch, NZ

.
All sorts of hats are coming out of my cupboard. Last night, it was the theatre critic’s one, as – with a little help from my NASDAlek friends – I headed for Christchurch to see the new, post-earthquake, Court Theatre and its production of Side by Side by Sondheim. 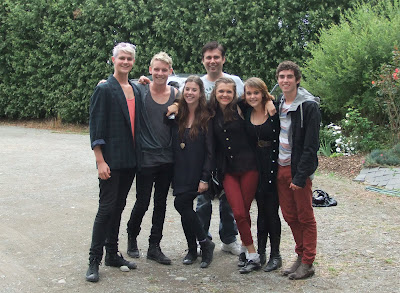 Its more than thirty-five years since I toddled down to Puddle Dock to see the latest in the run of composer-compilation shows (Cole, Cowardy Custard) being given to us in the guise of musicals. This one was a selection of dismembered bits, put together by vocalist David Kernan, from the shows of one S Sondheim, who was then little known in Britain save to a very vocal musical-theatre coterie. Well, it was an intermittently pleasant evening. Ned Sherrin did what Ned always did best, unobtrusively and wittily compering events from a seat at the front of the stage, and the three singers: Kernan, competent and cardboard as ever, deliciously maturing soubrette Millie Martin, and megastar-in-the-making Julia Mackenzie, shared their obvious enjoyment in their material. And some of it was splendid. The highlight and hit of the evening was Julia’s pianissimo ‘Broadway Baby’. The dead weight was (and still is) an irritating ‘Conversation piece’ made up of fragments and lines from here and there, and intended to be amusing. It wasn’t (and still isn’t). But the good bits were worth the others.

Side by Side by Sondheim 35 years later? A revue of just the early works of a man who has since become an adored icon of the American musical theatre? I have to say I was dubious, before last night, as to its effect in 2012. Was I right? Well, yes and no.

The piece was given almost every chance. The comfortable, modern theatre-in-a-warehouse is a grand place to watch a concert/compilation show of this type. The accompaniment (one visible pianist with a little assistance off-stage) was immaculate. The costumes were suitable, the part 2 set delightful (couldn’t we have had it for Part 1 as well, instead of nothing?), the direction and choreography just what they should be, effective because unobtrusive. Rightly, all the limelight was focused on the three performers. Well, three and a half. 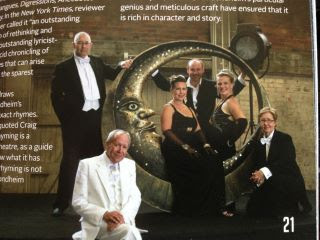 Come back Ned! The personality (?) who compered the piece (I don’t know his name) was frankly appalling. Indistinct to inaudible in speech, out of sympathy with the style of the thing, and intruding on to the stage, rather than commenting apart, with ghastly joey-joeys and end-of-the-pier monologue (who wrote those camperies?) … He would be better suited as the narrator of Rocky Horror, who at least gets zapped. Zap him is what I would have like to do for his almost ruining my evening.

And then there were three. And here is where Side by Side Christchurch simply triumphed. And I mean triumphed. All three performers – Ali Harper, Juliet Midgley and Michael Lee Porter – were excellent. First class. And I don’t mean a parochial ‘excellent for Christchurch’, I mean ‘excellent for anywhere in the world’.

Porter has the toughest job. He has to be tenor, bass, dancer, pianist, actor, and pull off all the bits that David K put into the show for himself to perform, and which won him a Tony Award. That means he has to tackle that anthem of awfulness ‘Being Alive’, sung in my auditions by half the gay chorus men in London, till I banned it, and he has to deliver the cross-sex version of Follies ‘Leave You?’, which was a little saucy joke in 1976, but now is just a dimunition of a fine song. It’s not the least thing to his credit that he almost brought both these monsters off. And he succeeded utterly in everything else he did. A pleasing voice of wide range, an engaging personality – no cardboard here – and that priceless ability to meld into a duet or a trio as only a consummate musician can. Gold star.

I’ve heard about Juliet Midgley since before she was born. Last night was the first time I had heard and seen her perform. Wow! Talking of consummate musicians, here is another with bells on. I mean, I always admire a singer who can hit the high ‘doo’ in ‘Drive a Person Crazy’ bullseye every time (and boy Ive heard too many who can’t). But that is just the beginning with this young lady. One minute she powers out the church singer’s sopranoisms in ‘Not Getting Married’, the next is Maria in West Side Story and the next she has switched to the bottom line and is giving a rich chest voice to comic lines or to that blowtorch song ‘Losing my Mind’. Maybe there is something she can’t do: it certainly didn’t seem like it last night! Gold star.

And Ali Harper. Well, I have to admit I have heard Ali sing before. First as a student, and later in Tell me on a Sunday on my only visit to the quakened Court Theatre. I admired her talents then: boy, have they matured sensationally since. It is not in any way diminishing the other performers to say that she gave me my two ‘on my feet’ moments of the night. The first came in a desopilant version of that cabaret-queen number ‘I never do anything twice’. This number gets regularly overdone, and camped to death by ‘personality performers’: here, it was delivered with a mostly subtler humour and oh my goodness: sung! The second stand-up moment surprised me. A Little Night Music is my favourite Sondheim show. Bar none. But I’ve never really understood all the fuss about ‘Send in the Clowns’, especially out of context. Blame it on Frank Sinatra. And do YOU know what the words mean? I never have. Until last night. My abiding memory of last night’s show is Miss Harper, looking uncannily like Ingrid Bergman, lounging on her plush couch singing – yes, SINGING – that song in a beautiful soprano voice, and making its meaning absolutely clear. Actress, vocalist and, well, in never hurts to look like Ingrid Bergman, does it. Gold star.

So. Sum up. The show is, I think, ready to go into retirement. Too much has happened in the world of Sondheim and his music and lyrics in 35 years to make it relevant today. (Do Passion instead.) And the Conversation Piece is a pterodactyl. But with a trio of performers like this on hand, they could have sung the phonebook and I would have cheered.
Which I did.
Lustily and sincerely.
Posted by GEROLSTEIN at 3:43 PM No comments:

A Night at the Addington races … eating

It’s eighteen months now since I hung up my restaurant critic’s hat, and dived into the depths of New Zealand and the inconvenience of ill health. But last night I fished it out of the cupboard for another whirl.
Well, it was almost a challenge. The advertisement for the Raceway’s ‘fabulous new cooked-to-order menu’ popped up on my facebook, and then in my e-mails. Well, I thought, they must really want to know what I think! So my friend Simon and I cancelled our barbie and bottles on the terrace at Gerolstein, and headed for town.

Now, racecourse food is traditionally mediocre. Well, on the public levels anyway. You eat reasonably enough in the posh part where I usually go with my club. And Addington has been renowned for its awfulness in the past. Last week I dared a sandwich. $5.90 for a slab of supermarket bread with a 50c sliver of dubious looking ham and something like diet cucumber. Why can’t people make a decent sandwich that hasn’t been grown in a triangular plastic box? And tastes like it.
They should take lessons from the ladies at the North Canterbury OTB. The sandwiches on workout days at Rangiora are real food.

However, on to last night. The menu looked ideal (remember, I’m a no lettuce, no fries man) and happily there were surprisingly few of the risible adjectives of menu-ese in its nicely precise descriptions (what is ‘ground beef’? Mince?):

Someone was going to be busy cooking that lot to order!
So after we had purchased my small beer (advertisedly $3) and Simon’s house white ($9.50!!!!), we ordered. I challenged on the prawn pasta, Simon was brave and went for the steak. Medium rare.

And I gathered my team of tasters. Three trainers, four owners, one temporarily unoccupied driver. They were a bit unadventurous and mostly went for fish’n’chips or steak.

The food arrived correctly swiftly (time enough to be cooked to order, but not too long) and I thought I’d made a bad choice. My prawns looked ill. Simon’s sensibly-sized steak looked good, and the fish looked splendid. Appearances aren’t always right. My prawns (2 large, 4 small) were tasty, the pasta perfectly cooked and the sauce very agreeable. I didn’t find a caper – but I’m not complaining about that.
The steak was tender and, since this is New Zealand, a tad less rare than we would call rare, and the accompaniments fine.
All the fish eaters were pretty happy. Comments ranged from ‘OK’ from the youngest, to ‘hugely better than last week’.
And from the one venturer into chicken and bacon ciabatta: 'excellent except for the old knife being too blunt to cut the crust on the ciabatta'.
At $13, all a good bargain.

Only one person was unhappy. A member who sat by us. He went to get a drink, and while he was away the efficient waitress brought his food … and took it away! He demanded a refund. :-( 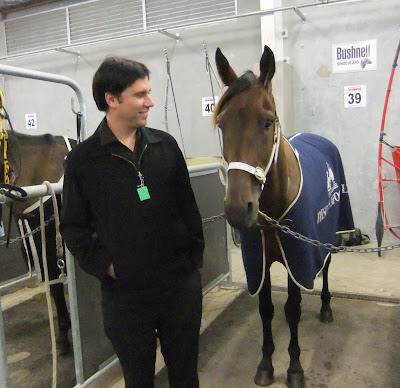 The races were enjoyable, my Seppl finished a slightly weary 7th in a very good trot and is being given a holiday, and Jan’s Rehab got knocked over … but that’s racing. And we had a good time. I’ll go back soon, and I will now – which I would never have done before – have a $13 meal at the track. I want to try the mince lasagna, and the Thai (does it really come from Siam?) beef…
Perhaps they could paint the prawns with fingernail polish to make them LOOK as appetising as they taste?

PS I took my camera to photograph the meal, but I ate everything before I remembered to do so, so here’s a photo of Simon and Seppl instead.
Posted by GEROLSTEIN at 1:21 PM No comments: