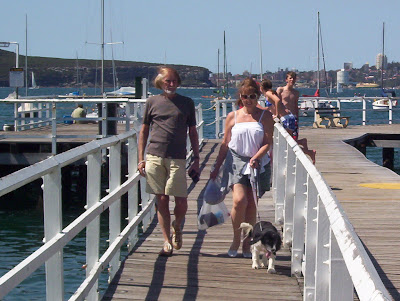 This second bite at the sunny city by the sea was a merry if unadventurous wee stay spent mainly in enjoying the company of Barry, Rosemary and Holly the dog. Here they are pictured on the boardwalk at Balmoral where we spent a delightful few hours by a proper golden Australian beach, sprawled on the grass feasting on some rather superior fish and chips. That's what I call life!
Posted by GEROLSTEIN at 3:01 PM No comments: 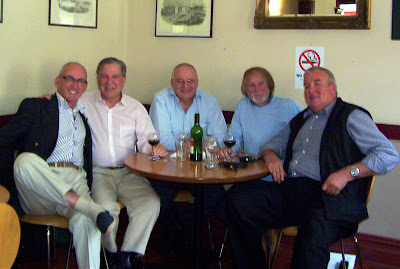 Five of the six owners of the splendid mare Rosmarino (5 wins and some $200,00 in prize-money a few years back) got together at a Sydney pub for lunch, and discussion on the future of our lady, her baby Basil (due to go to the yealing sales, which have been postponed because of Autsralia's equine flu epidemic) and his due-to-be-born-any-day brother (or sister). Also to top up the operating kitty: keeping horses in Australia is a rather more expensive business than it is in New Zealand. There was enough left in our pockets, when all was said and paid to sample some what was apparently Sydney pub-Thai food (?!) and a few bottles of local red. A grand time was had by all. Now we are all smoking the nervous cigar waiting for our grandchild's birth, and waiting for the various Sales people to get their dithering act together.
Left to right: Kurt, Ivano, Les, Barry, Gerald. Absent: Brian, somewhere between Warsaw, Berlin and France.
Posted by GEROLSTEIN at 2:51 PM No comments: 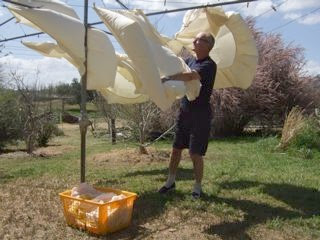 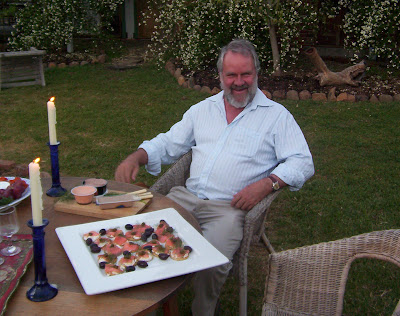 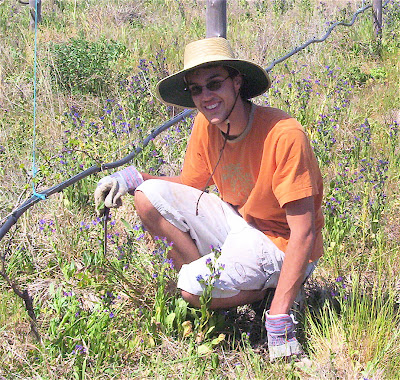 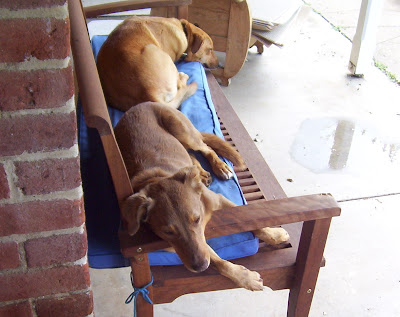 And finally, and oh so importantly, yesterday there was rain. About 12 millimetres of it, in three (very) short and sharp bursts. That may not sound much to those of us who live in damper climes, but what a difference it makes in this sunburned country. The greenery smiles. The weeds pop out of the ground instead of battling to stay in. And, of course, the house’s rainwater supplies get a top up. I’m glad I saw it rain on Barraba Station. It will be a happy memory to range with the others….
Posted by GEROLSTEIN at 3:32 PM No comments: