.
The Welsh Musical Theatre Orchestra (conductor: Andrew Hopkins) gave a concert version of The Pirates of Penzance on 6 November 2016. They wanted something a bit different for their programme, so they asked me. Of course. This is what they got.

Kurt Gänzl glances behind the scenes at the casting problems that beset the original Pirates of Penzance, and how it all turned out.

Pirates has always been special for me. A glimpse of a rehearsal of my father’s 1951 high-school production was my first taste of musical theatre (‘Sir, I want to stand next to Marjorie’). Sadly, though I remember Ruth and Frederic and ‘A Policeman’s Lot’, I have only a vague picture of the Mabel. I think I later wore her dress in a school play. 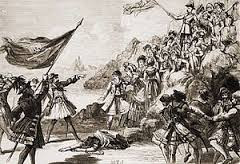 And a Pirates is the most recent G&S production that I have seen, as well. A couple of years ago in Ohio, deliciously staged and with a most perfect Mabel.

But the part of Mabel threw up a few problems for the show’s producers in 1880. Carte and his writers had done pretty well in casting their first leading ladies -- Liverpool jewess ‘Alice May’ in The Sorcerer and Australian Emma Howson in HMS Pinafore -- but both those ladies – who straddled nicely the fence between opera-singer and light comic actress -- had gone their way, and the triumvirate had to start looking again. One or two of their Pinafore takeovers might have done nicely – the archetypal G&S soprano Fanny Holland (speciality: ‘The Jewel Song’), or the former Italian opera comprimaria Margaret Phillips (ka ‘Pauline Rita’) – but for the all-important American premiere they went for a real Italian Opera prima donna. The London jewess known as Helene Crosmond, RAM, daughter of the infamous Madame Rachel (‘beautiful forever’), a fine dramatic singer who had sung lead roles at Her Majesty’s Theatre and with whom Sullivan was acquainted. 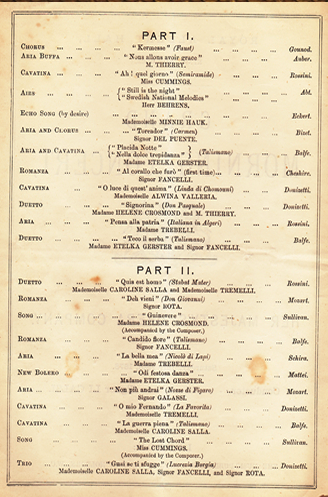 Alas, even though her career was tottering, Mrs Crosmond demanded operatic wages, so, with little time left, Carte looked again. And turned, at last, to his Josephines. Alas, he picked not Miss Rita nor Miss Holland but a certain Miss Tucker (‘Blanche Roosevelt’), who, most conveniently, was an American, a soprano and a nice looking woman. Inconveniently, she had a few faults, as well. Faults which had got her sacked on two continents, faults ranging from unprofessionalism to a penchant for press paragraphs, to singing out of tune. But she was pretty. Alas, America was not impressed with Miss Tucker: ‘[she has] a small soprano voice of limited register in which there is much of amateurish indecision and she was decidedly disappointing in a vocal way. She has a very handsome presence however and tried to act, although with little success’. 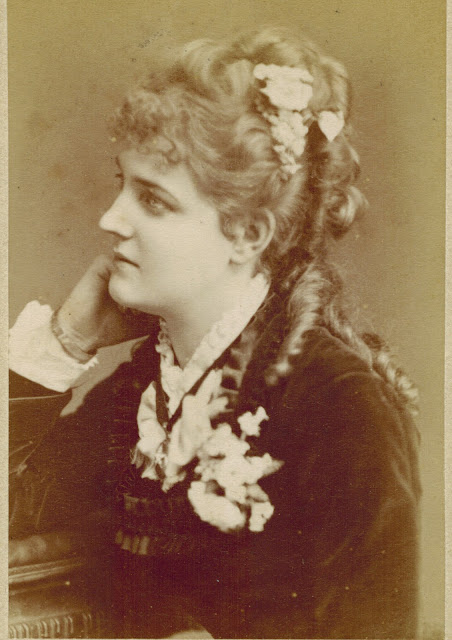 Meanwhile, back in Britain, a rather approximate copyright performance of the show was staged simultaneously, at Paignton, and another ex-Josephine-takeover was put up as Mabel. Emilie Petrelli (‘the name is real … of Italian parentage’), who had taken over from the capable Elinor Loveday in the Pinafore tour, was to be England’s ‘first’ Mabel. Miss Emily Mary Jane Peters (yes, I’m afraid so) did much better. She went on to take over the role in the London production, and was slated for the title-role of Patience to follow. But she didn’t like the new part and left the company. And Carte went on to hire another London jewess, Leonora Braham, who would finally become the Savoy Theatre’s first long-term leading lady. 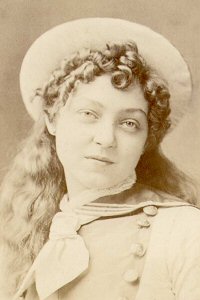 But the gentlemen had got it right before. When the time came to cast the role for London, they went outside the square. Mrs Sarah Ann Hunt née Isaac (yes, yet another Liverpool jewess) had been in the music business for nearly 15 years. But not in the theatre: since her pre-teens she had been singing soprano songs and arias on the music-halls. Speciality: ballads and coloratura. And she was now a very experienced performer. ‘Marion Hood’ made a splendid success of her first comic opera role, and although she left the show during the run, she went on to a fine career in the musical theatre. 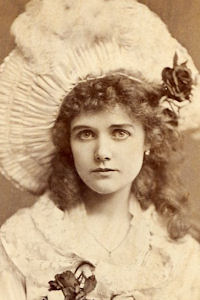 The world of opéra-bouffe had already proven that casting ladies from the music-halls, from places such as Australia where unpretentious performance was the order of the day, and, as we have seen by example, from the Jewish community, was the road to success. Hiring the sexy, would-be-operatic Blanche Roosevelts of this world (and there were plenty of them) was not. And casting the role of Mabel showed the Savoy team that fact; just as the successes of ‘Australian’ Julia Mathews, the music-hall’s Emily Soldene (née Lambert) and jewish Selina Dolaro (née Simmonds’) had already shown John Russell and Charles Morton, the first great English opéra-bouffe producers. 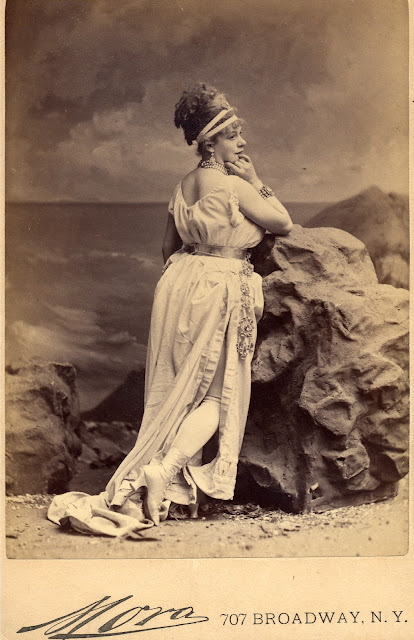 Of course, since those days we have gone through many different kinds of Pirates productions, from the ineffably boring to the excruciatingly modernised, and many different kinds of Mabels – I remember particularly Miss Karen Lancaster as the Papp-ised Mabel, at Drury Lane, a gem! -- but I’m not going to see any more. After 65 years of Mabels, I’ve retired. And I’m happy to stay with the memory of my last-seen Mabel. Miss Chelsea Friedlander of New York seen here with Clark Sturdevant (Frederic) in the 2014 Ohio Light Opera production… Post scriptum. Our ur-Mabels suffered different fates. Mrs Crosmond shot herself in a London cab, Miss Tucker-Roosevelt aka Countess Machetta became the mistress of Guy de Maupassant, ‘friend’ of Longfellow, and an aspiring author, and died penniless and young. Miss Peters became the wife of an orchid-collecting veterinary surgeon and a music teacher, still as ‘Madame Petrelli’, and died in Anerley, Kent in 1925, and Miss Isaac – she found success in the theatre, three (successive) husbands, and a comfortable later life.