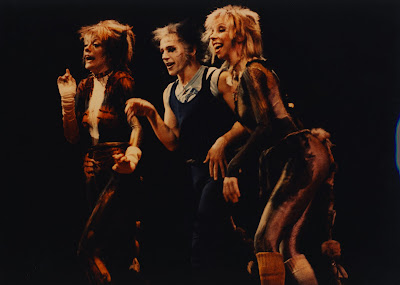 
Cats, performed by students? Hmmmm. I wasn’t sure. I was around in the West End musical world when the show was originally produced in 1981. It had, from the start, the buzz of a British A Chorus Line to it. Elitist, elegant, superior, snobbish even. Only the very best dancers in the country would be up to performing this show. When I first saw it, I wasn’t at all sure that its style and its tone, its almost self-conscious classiness, would gain it popularity. Well, I was wrong to doubt. A hundred thousand times wrong.
And wrong about it being suitable for students. These ones, anyhow. In this version.

As it moves into its fourth decade, from the professional stage to the amateur to the collegiate, Cats has changed. Like other shows of great originality, its individuality has become smoothed down, its quirkiness ironed out, finally it has become, in the nicest meaning of the word, more ‘popular’, more conventional.
As I sat there at last night’s premiere in Ashburton, I felt as if I was seeing a version of the show as re-done by Ralph Reader or Busby Berkeley. Huge, colourful, glamorous. Did it work? In a large part, yes. Why not? There are lots of students available—and, the best thing, capable – of taking part, so why not have squadrons of tapping cockroaches and Siamese Cats in colourful costumes, why not have 42nd Street echelons of dancing pussies pounding energetic moggie-steps to the accompaniment of a hugely voluminous vocal sound. Why not? It gives everyone plenty to do, thoroughly pleases the audience ... and much of it thoroughly pleased grouchy, jaded old me, too. OK, I’ll tell you what, give me back ‘Billy McCaw’ and cut ten minutes of all that Jellicle Balling off the end of Act One, and I’ll even go with the fiddled-about-with-since-1981 version.

Anyway, Cats in its 2011 version – with its large proportion of young, lively characters -- is thoroughly suitable for students. On one condition. That they are technically, choreographically and vocally, capable of correctly performing its series of stand-up character numbers and ensembles. And the Students of NASDA proved, last night, that they were decidedly capable. Each and every one of them could Dance with a capital D (and if anyone couldn’t, he was a bloody good faker), the volume of sound and the zing of half a dozen sopranos hitting top Z together, in the big ensembles, was im-press-ive …

When all were so good, large part or small, you aren’t supposed to pick out individuals. But, of course, I’m going to.

I’ve seen endless student shows over the last 35 years, in my old job as a talent-spotter, and I didn’t expect to find one of the best vocal performances of those years in Ashburton. Grizabella, as so unforgettably created by Elaine Paige, is necessarily in the show’s spotlight, as she has the one take-away tune of the affair, the soulful, yearning ‘Memory’. And not much else. Without a superb ‘Memory’ and a fine Grizabella, the show loses its ‘heart’. Last night, it had all the heart in the world. Shaan Antunovich, aged 21, a tiny figure drowned in a huge Miss Havisham costume, sang the famous song to within an inch of its life. I have never heard it sung better, except – of course -- by Ms Paige. It was a stunning vocal performance. This young artist still has learning to do, and her very lowest notes will gain the necessary richness in a year or two ... but, my goodness, if she can sing like that now … I hope I’m around to see her fly. Because she will.

Enjoyment of a performance is always tempered by enjoyment of the material. And I have to admit to having favourite bits in the score. And unfavourite one. I never liked the Kenn Wells and Wayne Sleep bits, and I adored Susan Jane Tanner (whom I snapped up as a client!). All my ‘best bits’ got yeoman service last night.

I especially liked Monica Hope as the Gumbie Cat tripping about in front of her Chocolate-Soldier cockroaches, truly comical and never overstated, and I was most impressed by a third player in an ‘old’ part – Tainui Kuru, suffocated in an even bigger costume than Grizabella’s, as Old Deuteronomy. Mr Kuru has the famous knack of appearing to do little, and riveting your attention. When he stepped forward, to sing his solos in a rangy and ringing baritone voice (I’m sure Brian Blessed never sang a top G), the storm of activity which had whirled relentlessly upon us suddenly calmed. There was just the big, still cat, and the fine singing … ‘beaut’, as they say down here.

Danica Brbich and Dayna Dodd were Sharon Lee-Hill and Geraldine Gardner (I’m sorry, the naming of cats isn’t one of my talents, and anyway the parts are all differently cut up) to a ‘t’, dancing and singing swingeingly about ‘Macavity’ in what was one of the best moments of the original show, and still is of this.
Jason Parker and Kelly Mahoney made a tasty meal of the highly-coloured Growltiger sequence, and played and sang the cod Italian aria-duet inserted for the show’s American version with OTT bravura.
Edwin Beats strutted his stuff splendidly as the sexy Rum Tum Tugger .. I spy potential there, if he remembers to stay in character when he is not soloing! – Nathan Tunbridge made excellent characters of Gus and Bustopher (when did that become a combo?), unlike enough Messrs Blessed and Tate to leave an agreeably clear memory of his performance with me ..

And, oh, there were so many more.

Of course, the largest star made by the original production of Cats (not counting those who already were stars) featured in one of the smallest roles. One of the smallest, but the best, roles. I can still see and hear the largely unknown Sarah Brightman, up on the rubbish heap in the starlight, joining Ms Paige in duet …
Manuao Ross sang the little part beautifully, with all the sweetness that it calls out for, and recalled for me perhaps the best moment of all of Cats 1981.

So, all in all, an extremely enjoyable evening, gingered up by some really grand performances and especially by a most memorable ‘Memory’ .. 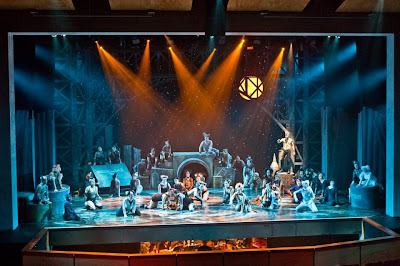 Its quite a few years since I first saw a NASDA show, and they seem to be increasing in quality every time I see one. I wouldn’t have picked Cats as a suitable vehicle for these young men and women, so bravo! to whomsoever had the foresight to do so. THIS version. Bravo, all round.

PS Hey, I just remembered, what happened to the Pekes and the Pollicles? When did they disappear? And wasn’t there a rather dull solo spot for W Sleep? And I see that disastrous Rumpus Cat is gone. Seems there’s rather a lot to say in favour of this version!
Posted by GEROLSTEIN at 7:21 PM No comments: