The Story of Mikie

Once upon a time a wee horse called Mikie was born here at Gerolstein. A lovely baby, but with a race-horsey handicap. His father was the soon to be vilified stallion Island Glow. But we didn’t know about the vilification, at that time ….

Mikie is now six. And trying, this year, to be a race-horse. 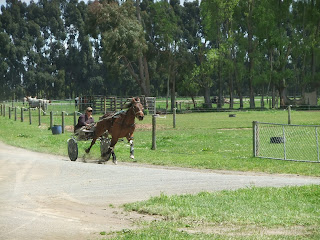 Everyone who has stayed at Gerolstein -- from Germany, Slovakia, Ameirca or Alaska -- knows Mikie. No matter that there are a host of  beautiful mares and geldings here, multi-winning horses whereas Mikie has never as much as run a place on raceday .. who is it (put your hands up) whom our guests love best? Yep. Mikie. Hands down.

His form line would shrivel you. 00X00. It’s a while since he finished in the first ten. But that formline doesn’t show that he’s run a couple of nice workouts recently ...  even won one, beating a horse called Limitation which performed creditably on the Coast circuit this week. 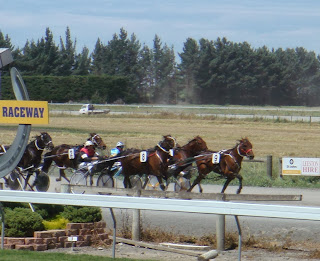 But, basically, Mikie is seen by the pundits and the public as a maiden makeweight. When he goes racing, he goes out at 100-1.

He was entitled to today. We entered him for a dopes’ race with a $5000 stake at Banks Peninsula. And the club (who are allowed to) put him instead into the grass-track graduation final worth $12,000!  Mikie in a final??!  Of anything? Against horses three years younger who had mostly run 1, 2 and 3 in their last starts. Thirteen of them. Another zero in prospect?

Well, to slice the story thinly, and come quickly to our muttons, Mikie ran this evening like a hero. He got out well, but not quite quickly enough to make the front. Then a striving pony galloped outside him and came back on him. And he went off stride. That’s it, I thought. Last. But Mikie pulled himself together and tucked in in the running line.

I could see him at the back of the bunch until they came into the straight .. please just run on Mikie! Don’t drop away!

No, its not a fairystory. Mikie didn’t win or even get a place. But he got in the call. In spite of being – again! – backed into by an exhausted and fading runner near the line, he punched bravely on to finish 6th, and we had the pleasure of hearing his name in the final call…

So Cinderfella didn’t win the Princess, but don’t anyone again try to tell me again that Mikie isn’t a racehorse. A C0 racing mostly C1 horses (non-winners and winners) and he beats half the field home?

I’m proud of you Mikie! You are a dear, dear boy. Have some hay! 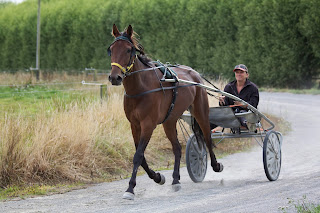 Posted by GEROLSTEIN at 10:12 PM No comments:

Once on This South Island

I think I am becoming addicted to studio productions. They seem so often to be much less pretentious, much less glitzy, much better performed … and directed with so much less of the ‘look-at-me-mummy-arn’t-I-outrageous’ and so much more truth and style.

Once on this Island is a sweet, almost banal ‘the marquis and the milkmaid’ piece, which – with its good, sweet, peasant Antillean Islanders (brown) and its nasty howwid rich colonial French (white) – could very easily become irritating. You half expect someone to shout ‘bring on the guillotine’.
But the French are portrayed (or were tonight) as so two-dimensional as to scarcely count, so the distaste is diffused.  And drowned in jolly, loud Carib-flavoured music, played by an enthusiastic bongo-laced band of four.

The Christchurch production was directed by Angela Johnson and Stephanie McKellar-Smith, the resident directors of the NASDA (National Academy for Singing and Dramatic Art), with flair, economy, style and a wonderful belief in the material … staged as winningly as this, Once on this Island is a natural for a studio theatre or small group in any part of the world. Well, maybe not France.

It is a piece which, on the evidence of tonight, is custom-made for young people. To perform, I mean ... although its simplicity and strong rhythms almost make it a children’s show. The cast of fifteen were evidently enjoying themselves hugely: and (especially in a small space) that kind of enthusiasm is irresistible. 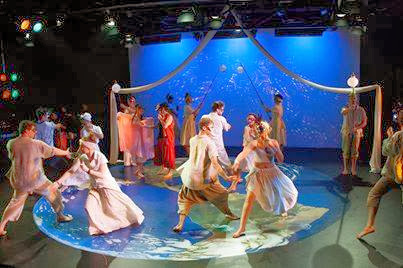 It is almost invidious to single out individual performers when an ensemble production is so neatly and pleasingly done: but the central character of Ti Moune, the island girl who is the milkmaid of the story, certainly has by far the largest role. She was very attractively and suitably winsomely played by the diminutive Rebekah Head, who showed up with a strong singing voice which made its best effects in the less loud and more feeling passages. Her radiance in her apotheosis in the tree (a lovely touch, beautifully staged) gave one a little lump in the throat.

Of the remainder of the cast, the standout for me was Imogen Prossor as Mama Euralie. While everyone else was singing away lustily in pretty much the same 21st century chest voice, she gave us a warm, feeling, hugely attractive contralto (speaking and singing) performance which suddenly flew up to an unexpected top Z. It was a stunning performance. I couldn’t take my eyes – or ears – off her.

The other best roles of the show are those which give it its originality. The Caribbean gods, who meddle with the characters’ lives. Emily Burns gave Asaka all the allure and power of a supercharged Velma Kelly … a fine, huge voice, 1000kw performance … I’d like to see her sing a soft ballad at 500kw. Becky Button as Erzulie was given horrid makeup and the same kind of vocal material and coped very well … but, you see, everyone has the same kind of music, everyone sings fortissimo, so they all melt into one, and you desperately need a Ms Prossor to give some warmth and variety to proceedings.

Among the boys, I noted a touching performance from Olly Humphries as Tonton Julien, a stylish but occasionally strained Agwe from Zak Enayat, and … poor Adam Spedding, who I am sure is a very nice lad, had to play the role of the improbably named Daniel Beauxhomme, the gutless ‘hero’ of the affair. An impossible task.

I don’t know how this show was originally staged, for I never saw it. But I can’t imagine it working any better than it did tonight.

Thanks NASDA 2013. I think this rates amongst the best productions I have seen at the Academy. I look forward to the next.

Posted by GEROLSTEIN at 2:14 AM No comments:

My theatre winners for Summer 2013.

Some of the decisions as to the winners of my ‘Awards’ were not very difficult, but some of them were frightfully hard. Because all the nominees are truly grand performers … and…  oh lawks! I sound like a schoolteacher.. . well, that’s why out of the hundreds of artists I saw, they are there in the list of loved ones. But when it came to the crunch, and I had to choose among them, I simply asked myself ‘which one of all these would I most like to see/hear again?’

First category. Performance in an opera (blokes). One of the nearly dead-heats. It’s so difficult to compare a performer in a large-stage full production with someone singing in an operatic concert performance. Or a studio  production. The full-stage man has the advantages of ‘performing’ and also the disadvantages of any ‘production’ that might be laid upon him.
I’d like to see Andrezej Dobber in a less eccentric Rigoletto, without a glitter-frock. His superb singing and acting shone through the handicaps, but they were handicaps.
So, on my principle ‘what would I like to see (hear) again’ my winner is (fanfare!)

Second category: Performance in an opera (ladies). Again, a mix. One contralto and two soprani. One virtual musical comedy, one opéra bouffe, one opera that longed to be bouffe? No melodramatica. Sorry Gruberova. And all the other ovas.
I really and sincerely went overboard for all these three ladies, and would voyage several kilometres to see any of them in anything ... but there’s no doubt as to the winner: my quadruple threat

Right. I don’t know why I put this category in, but ‘best staging of an opera’.  I set myself a task there. By staging, I mean direction, choreography, sets and costumes. All of them.  Together. Well the best often go together. Not this year.
I’m left with a ‘best direction’ in a studio, and a dazzling physical production in a large house … so .. on my rules, this was the result …

DER FLIGENDE HOLLÄNDER from Basel, at the Staatsoper

Than we come to the section in which I’m supposed to be the Big Adjudicator. My favourite musical theatre performance.
(Don’t you think ‘the musical’ is a stupid ungrammatical term?).
Well, I didn’t see a huge number of such shows this year, but they ranged from the superb to the ghastly.
I hope Germany will get rid of its xenophilia, because nearly all the good ones I saw were the home made ones.
Once again, we’ve got all sizes and types of stages from the Theater des Westens and the Theater an der Wien to Biedenkopf and Altenburg.
And again, dead-heat.  Almost.
Mdlle van Dam you were as good as Grainne Renihan or Elaine Paige. But you can’t beat my winner. I went back to see him four times:

The ‘my favourite concert’ was the easiest category to decide. Once again, I covered large and small, and actually was only disappointed once, but the most glorious night out was at Radialsystem with the Deutsches Rundfunkchor and

The Lemon.
Not many lemons this season. The FREISCHÜTZ was just incomptently done, NATÜRLICH BLONDE looked and sounded like a hands-down Lemon-winner at the interval, but picked up slightly in Act 2, and the one ineffectual concert of my season did have some grand music just not very well performed. But my fourth nominee had hardly one single redeeming feature. The Lemon goes to

And finally, to end on a positive note, a category which didn’t have nominees. If it’s a lemon for my worst night of the season, I suppose it has to be an orange for the best.

And now we can roll up the red carpet and put away our diamonds and designer clobber until next year …
1 April 2014 we start all over again …
See you then!

The Kurt Awards for Summer 2013: the nominations

Well, the Academy has sat, and come up with the list of nominations for the Kurt Awards of 2013.

They sat in my bed, because the Academy (like all effective Academies) consists of one person. And this time its ME!

I've spent April to October in Germany, and I've had a splendid time in opera houses, theatres and concert-halls, mostly in Berlin, but with side trips to such as Vienna, Dessau and Biedenkopf. Most of what I've seen was good to great, very little was self-indulgent and weak. So what was the best?  Well, I don't do 'best this' and 'best that'. That's far too presumptuous. Chuckle. Even for an Academy with my credentials!

I do 'my favourites'. The people and productions -- large or small -- which have given me the most pleasure. And after mature consideration and discussion with myself, here they are!

I am putting Madame Gruberova hors concours, likewise Olesaya Golovneva who sang in RIGOLETTO while her alter ego acted.

My favourite staging of an opera:

Kurt’s Lemon for my Worst Experience of the year

Hold your breaths, the winners will be announced when I've had time to discuss a little further with myself, and see if my right hand votes the same as my left ..