A summer of Seppl and Softboiled eggs

I thought I might get to go to the Cup this year. Well, it looks like being a particularly competitive and interesting one. And I haven’t cheered home an NZ cup-winner, from the stands, since the year of (blush) Cardigan Bay. And, this year, I was going to have a runner on Cup Day, a treat that has only happened for me once before, in my fourteen years of owning a handful of horses.

The best laid plans gang aft agley. My hat, cravat and gloves have to go back in the drawer for another year. My horse has emigrated.

I don’t sell my trotters often. Since dear old Davey Crockett, I breed them to race them, and in the hope of turning up a really nice multi-winning one. I think I finally did that with Seppl (Wrestle-Gwen). 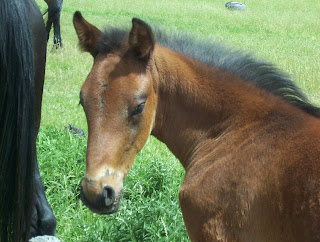 I’ve told the story before of how he was born, from a $600 service to Wrestle, merely to be a childhood chum for the ritzier The Soldier Fritz, and how, while Fritzl was sidelined with injury, his mate went on to win five races. Naturally, he attracted some attention, but I wanted him to race here, where I could see him, carrying my soft-boiled-egg silks …

But this year I changed my mind. Partly because he was going to be up against the likes of Quality Invasion each time he ran, but largely because, for a chunk of the year, there were simply no races for a C4 male trotter with a rocket start. C1, C2, mares only, mobiles… and nothing for him … so when the latest offer came from the other side of the small pond, Murray Edmonds and I decided to let him go. No soft-boiled-egg colours, but plenty of opportunity for him to fly the made-in-Gerolstein flag, albeit for someone else. 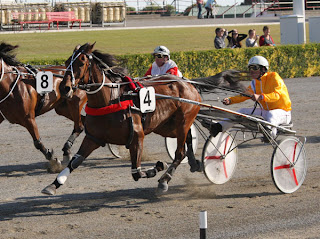 That was a fortnight ago. And yesterday, already, after two trials, he stepped out at Menangle. In a mobile mile! The trials were, I suspect, to get him used to the unfamiliar mobile gate. The first, he trotted round behind the pacers in 2.01 and something. The second, he won by 35 metres. The pundits weren’t quite convinced: Derby placegetter I See Icy Earl and Kiwi A Loan Again got the most suffrages, but my little boy finally went out second favourite. And he never gave them a look in.

He went away from the mobile gate as quickly as he does from a stand, went straight to the front, and Sunday-strolled around as the field behind him disintegrated. Then driver Robert Morris glanced casually around and let the accelerator out a notch. Seppl cruised clear of the field and down to the line … he had virtually time-trialled his mile in 1 58.2. Eleven metres behind came the second horse, with the favourite 19 metres back third. And it’s not just proud papa talking, he did it on his ear. Both ears.

Other people evidently thought so too. My email tinkled soon after, and it has tinkled periodically ever since. Well, yes. I’ve a four-year-old Love You brother (D’Arcy de Gerolstein) and a yearling Monarchy ditto (Montmorensy), with Murray Edmonds, and a few nephews and nieces …

But the day hadn’t finished. After another ex-Kiwi, Neville Vaughan, had taken out the following race, we shifted to evening racing. The 7-win Live or Die mare, Livia deGerolstein, which Wendy Williams and I race in Victoria, was running at Melton. And blow me down, she only went down a whisker! Damn the angle at Melton! We thought we had a double! 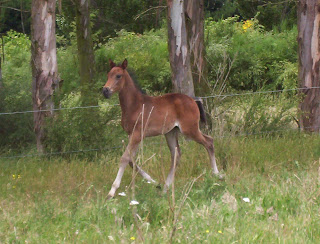 And up in Queensland, another Gerolstein-born horse, little ‘Carlos’ (aka Return of the King), whom I rescued from a tourniquet of fencewire as a foal, at the price of a volley of electric shocks which would have stood my hair straight up, if I had any, also ran second.

All this, of course, happened just a fortnight after I left Australia for New Zealand. They never win when you are there! I’ve got used to seeing the softboiled-egg silks win on a computer-screen, from the other side of the world. So, please, during my summer’s stay, when I launch my 4-pronged attack on the tracks of Canterbury, could D’Arcy, Lucie or Agnes de Gerolstein, or the convalesced Soldier Fritz please fly the eggy colours just once for me. Or I’ll have to commute to Australia from now till I re-become a man of music and the theatre, and head back to Berlin!

Posted by GEROLSTEIN at 8:07 PM No comments:


Just flown in from Europe, and I’m off again … this time to Ashburton. Reason? In the dearth of post-quake Christchurchian theatres, that is where the final show by the graduating class of NASDA (New Zealand’s musical-theatre degree institute) now takes place. An occasion not to be missed.

The piece performed this year – after last year’s fine Cats -- is the current version of Beauty and the Beast. My last visit to a theatre, a couple of months ago, in Berlin, was to see The Dance of the Vampires, a classic example of how to write, compose and stage a beautiful burlesque fairytale musical. As a show, this Beauty and the Beast falls, for me, at the other end of the appeal scale. It was a mildly amusing Disney film with a surprisingly wallpapery (and plugged) score and some fine cartoon effects. On the stage, without the effects, you are left with a bunch of two dimensional characters and all that wallpaper. I find it musical-theatre pap.

But, hey, I wasn’t there to see a musical I’ve already seen (and wouldn’t have bothered seeing again under normal circumstances), I was there to see the work of the class of 2012, and that was an altogether different bowl of cherries.
These young people are graduating, and that means that they are not to be regarded and reviewed as students. They have to be judged as neo-professionals. Because their next performance will, hopefully, be an audition for a professional show.
Well, NASDA has done a fine job. I saw these same students in year two, when they had The Music Man to get their teeth into, and the improvement in skills, voices and performances since then is all that could be hoped. From those who took the leading roles, to those who on this occasion played bits and chorus, everyone is a competent musical theatre performer. 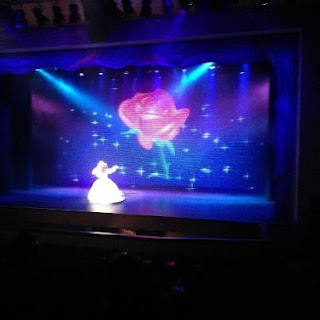 But, of course, all are not equal. They never are. And last night threw up one outstanding performance. Sarah Jayne Phillips’s Belle would grace any professional stage, anywhere in the world. A winning stage presence, a clear and attractive speaking voice, a neat touch of humour, and the sincerity and earnestness to turn her cardboard character into a believable woman, all combine with an easy, unaffected singing voice of undoubted class. This Belle simply lit up the stage, and made my night.

Oddly, the largest male role in the show is not the Beast. It falls to the posturing, posing Gaston, Belle’s village postulant, played by Sam Armstrong with all the gusto needed. And somehow he made the braggart rather likeable. This performance was a sterling example of progress. His singing voice has richened, filled out, firmed up, in the year since he played Harold Hill. His stage style has gained ease and confidence and ... well, I guess it’s ‘maturity’ and practice … His double-act with Tom Worthington’s excellent Le Fou was the comedy highlight of the night.

The Beast is what I call an ungrateful role. Dressed, for reasons unknown, like an out-of-work yeti, made to lope around the stage like Quasimodo on steroids, Tainui Kuru has only a couple of banal ariettas in which to make his mark. Which he does. He has a lovely high baritone voice, which would have made him a fine Billy Bigelow or a Curly in earlier musical-theatre days. It seemed quite unfair that he didn’t get to be the prince, but was transformed into a tenor (Adam Standring, another top among the improvers) for the final duet.
Simon Rennie played Belle’s gentle, plotworthy father and joined with her in duet in a warm, smooth baritone, and Nat Ta’ase out-Robert Helpmann-ed Helpmann as the chief nasty.
The other principal characters in the piece are the enchanted half-humans of the Beast’s castle. I’m not sure why they are enchanted or what they were doing there to become enchanted, but logic is not needed in fairyland. Logic, too, would maybe explain why mid-Atlantic (or Pacific) accents slipped into this French fairytale alongside a teapot from Oldham and a lot of ooh-la-la-Franglais.
Jason Parker, Emma Griffith, Jamie Sinclair, Lauren Marshall and Stacey Lavender played the principal pieces of ‘furniture’ lustily with Miss Griffith getting to sing the show’s odd title-song delightfully, and Miss Marshall getting the best costume of the night, which she filled lip-smackingly. The other ‘best-dressed’ award, in a show which is made to be a costume parade, went to Laura Gully who flew splendidly as the Enchantress, in a gown that looked like a hand-me-down from Fruma Sarah.

The costume parade, I’m afraid, didn’t appeal to me. In the movie the production number ‘Be My Guest’ was cleverly and enjoyably over-the-top and satirical. On stage, oddly placed, it comes down to just another Ralph Reader mass dance number. But the class of 2012, aided by the class of 2013, went to it with a will and with a wardrobe-full of rather not-to-be-danced-in costumery, in an atmosphere of enthusiasm and fun.

Well, class of 2012. All that’s left for me to say is ‘good luck’ in this tricky business of ours. You’ve done your training thoroughly, and you’re ready to fly.  So fly, and all my good wishes go with you.
Posted by GEROLSTEIN at 5:36 PM No comments: