My dear friend Gerry died in Philadelphia today. He was 79, which wasn't bad because he'd never expected .. given his medical history ... to make it to such an age.
I suppose someone will be writing obituaries about him for the New York Times and other more seriously academic journals ... well, they may even ask me, but my recollections of Gerry would be perhaps a little personal and irreligious for a learned journal. And, anyway, neither of us had a huge penchant for being 'learned', which was quite a good thing, given the subject of which he chose to revolutionise the historical recording ... closely followed by his first and most enduring disciple: me.
His The American Musical Theatre was directly responsible for my The British Musical Theatre and the dozen tomes that followed it. So, you could say he changed my life.

This isn't the sort of photo you usually see of Gerry. He'll usually be black-and-white, stiff and rather embarrassed looking, So I hope some of the obituarists find this. I took it. And I declare it non-copyright. It was at my neighbour's wedding, on the ramparts at St Paul de Vence and - oh, Ian must have taken it, that's my wrist with the glass of champagne behind his shoulder. 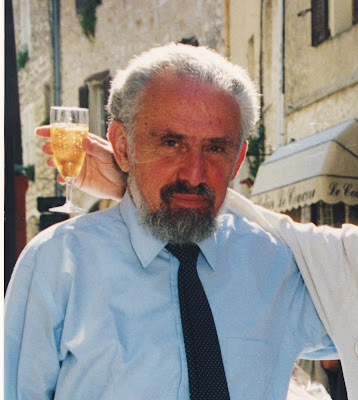 I'll write some more when it's all sunk in properly. Funny, last time we spoke -- about six weeks ago -- across the world, it was he who was worrying about my health. The stroke, and all. Then suddenly he wasn't answering his phone ...

Exit stage centre, you might say. His book remains, and will always remain the best chronicle of the American Musical Theatre.
A fitting memorial. And one or two of us are left with a different kind of memorial as well ... a dear, lovely, generous man ..
Posted by GEROLSTEIN at 12:04 AM 5 comments: