It's Time to Get On With Living

2011 ended, and 2012 has begun in a manner I can only describe as ‘more of the same but mostly not so grim’.
But 2011 had one more brutal kick in the vitals to deliver before it finally sank, hated, quaken and reviled into the first stages of the past.
In December, we lost my very dearly beloved brother-in-law, Greg, who finally succumbed to a stomach cancer, which had been forecast to take him several years ago. So, brother John is now, like me, a widower at little more than sixty years of age. After 38 years of communal life and ultimately of marriage. 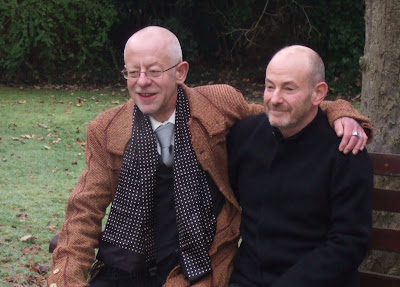 A brother ought to be around at such times, but I – enmeshed in my own health miseries – didn’t fly north. I just wrote and rang. Nevertheless, I started thinking. It was and is time to yank myself out of my drooping invalidism and to get back on the road. It was and is time to get out of the self-pitying groove I’ve made for my ailing self in New Zealand and get back to Europe, where, let’s face it, I’ve spent the better part of my life.
And yesterday I booked my ticket. I’ll leave just as soon as Easter is out of the way: and I’m trusting myself, my cabin-bag and my walking stick to Emirates airlines, who (apart from their all-night call bells) have treated me kindly in the past. They will take me back to Barry and Rosemary in Sydney, and they together will launch me forth towards Birmingham airport, and Johnny…
I’ve got a lot of catching up to do in 2012. The dear friends in Berlin, Jersey and Wight … Paris, where the DIVA musical-theatre festival is being staged in May, Vienna where Kevin and Marie-Theres’s grand Operette Exhibition will be showing, the Netherlands, too, or maybe Spain … the events and people are crowding my schedule deliciously already. Can I do it? Well, I’m bloody well going to. With a little help from my friends.

They’ll find me a little changed, those friends. Instead of a lively young 64 year-old, rather a rather baggy-eyed ageing slowish 66 year-old, but maybe they can change all that! 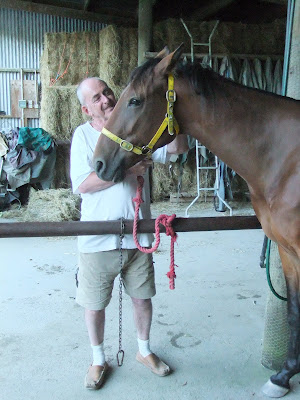 I’m not going to give a health bulletin this month. Simply say that I had my cataract done and now see so brightly that I have to imitate Harry and wear sunglasses. Clarity is longer coming, but that may be my specs. Teeth (such as remain) are done. And I’ve been acupunctured till I’m like a sea-urchin.

A Gerolstein bulletin? Nothing unusual. The regular number of breached fences and broken water pipes, the death of our jogger car ($100 a new one from the best local garage in the world) and yesterday a burst water main. My limpened hand will no longer undo a crusty pipe joiner, so that wonderful garage had to be called on again. Only one new invalid: Agnes (above) took fright at one of our periodic 5.0 earthquakes, ragged her cover and whacked her leg. Two weeks off, a month’s delay in her programme. Par for the horse, in the racing world.

That racing world has been, yet again, our main source of joy. Livia has run two thirds in Victoria, and Seppl … well, Seppl has done it yet again! 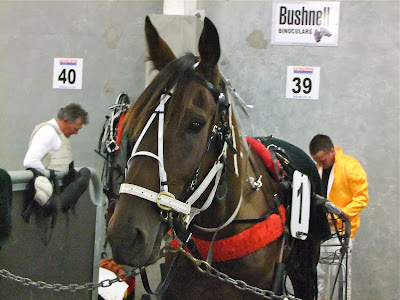 At the Banks Peninsula track at Motukarara … where I’ve never succeeded in wining a race … Sepp lined up on a 20 metres handicap against a full field of trotters, ranging from some rather ordinary 1-win types to several open class horses. (Open class is ‘higher you cannot go’). I watched alarmedly as he sat back in 13th or 14th place while the other better horses scooted round the field to do battle ... into the final straight, he was still almost last. Oh, dear. And the leader had dashed clear. But Murray pulled Seppl to the outside and pressed the turbo button. Down the outside he powered – eating up the ground like Livia on her most dramatic days. It was impossible: the distance was too great, the leader was too far ahead! But it wasn’t, and he wasn’t. Little Seppl notched up his fifth win with one of the most exciting performances a horse of mine has ever put up. Oddly, I didn’t get very excited. Till after. Because I was so sure he couldn’t—no one could – close that gap. But he did.
Last night, Seppl ran again, at Addington. He’s a multiple winner now, so he has to race the best. And last night’s field were all top-rated horses. He ran an honest race, and finished 5 lengths from the winner. I reckon soon he’ll be competitive at quite a high level. Whee! And Livia runs Monday at good old Yarra Valley ..

So it’s January. The sun is shining, we have the delightful company of our latest ‘farm workers’, Yasmine and Hermine from Ghent, the peachick count remains at five (Trixie 2 out of 5, Dixie 3 out of 3) until Miss Ing hatches in the days to come, Mr Cocky has given up courting, and pulled his tail feathers out to mark the end of the mating season …

Well, I’m not pulling my feathers out! I’m packing them (not that you can get many in a cabin bag, and I can’t carry a suitcase) and going into training for the Big Return. The gradually unfreezing north, here I come…
Posted by GEROLSTEIN at 7:54 PM No comments: