.
It’s mid-November. I’ve been back at Gerolstein for a month and a bit. And today my racing season began. Wendy and I have got four racehorses this season, Mikie (Fifteen C) who won a race last year, Agnes de Gerolstein (who almost won several times), plus Thomas and Rocky (Rock of Ages) who haven’t yet had a race. The first three are more or less ‘ready’ and Rocky is closing fast. There is one slight problem with having such a big ‘team’: we have a two-horse float. Well, we’ll face that one when we come to it! 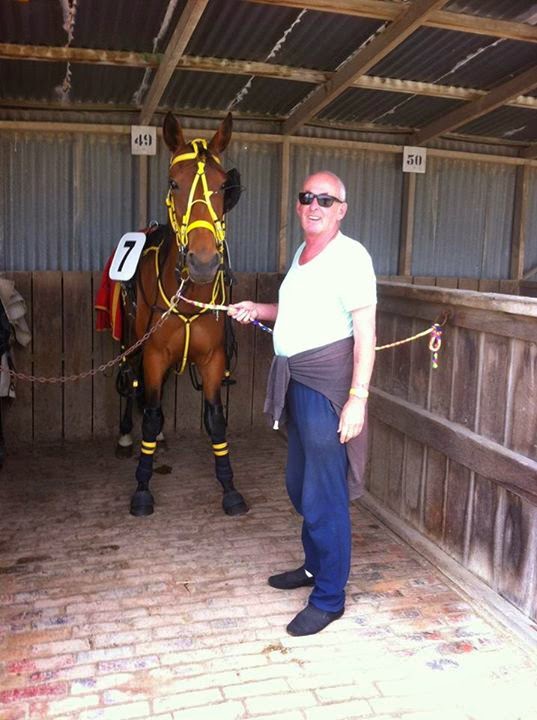 It was Agnes who launched our season. She’d missed a needful trial because of the float problem, but there was a nice little race suitable for her (ie standing start, 2000m) at Timaru, so off we set, to predictions of hail and thunder, for 2 1/2 hours drive south. The storm hit us a bit after half way, but Timaru itself was dry if grey 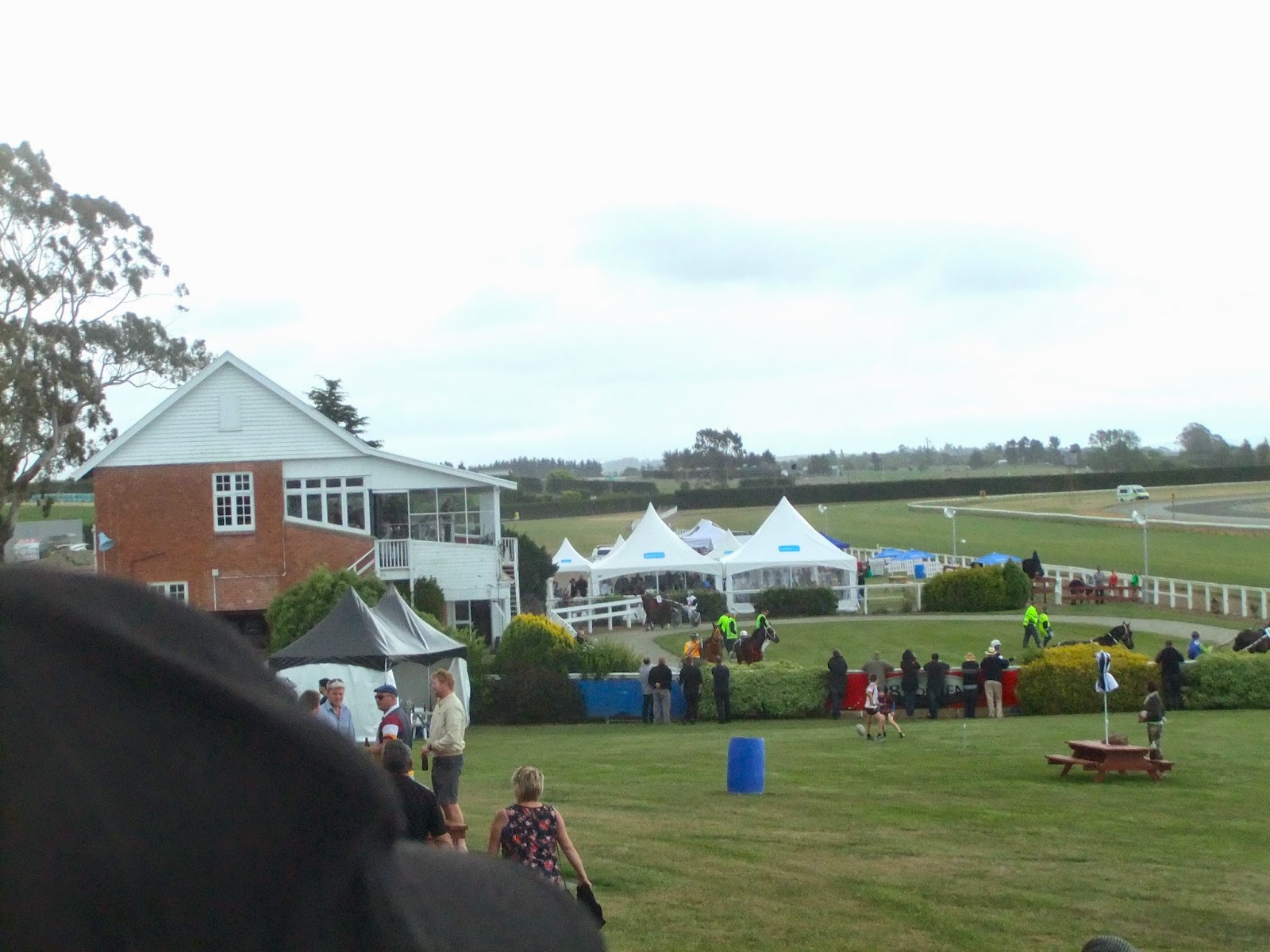 I like Timaru racecourse. It has a happy, countrified feel, and plenty of room for the horses. Agnes, a notable misbehaver pre-race, was as calm and good as the little girl with the curl in the middle of her forehead. But she likes Timaru too. She ran third at her last start there, when I was in Berlin. Following in the footsteps of our Boofie, Cliffie and Wilma who have all won on the track. 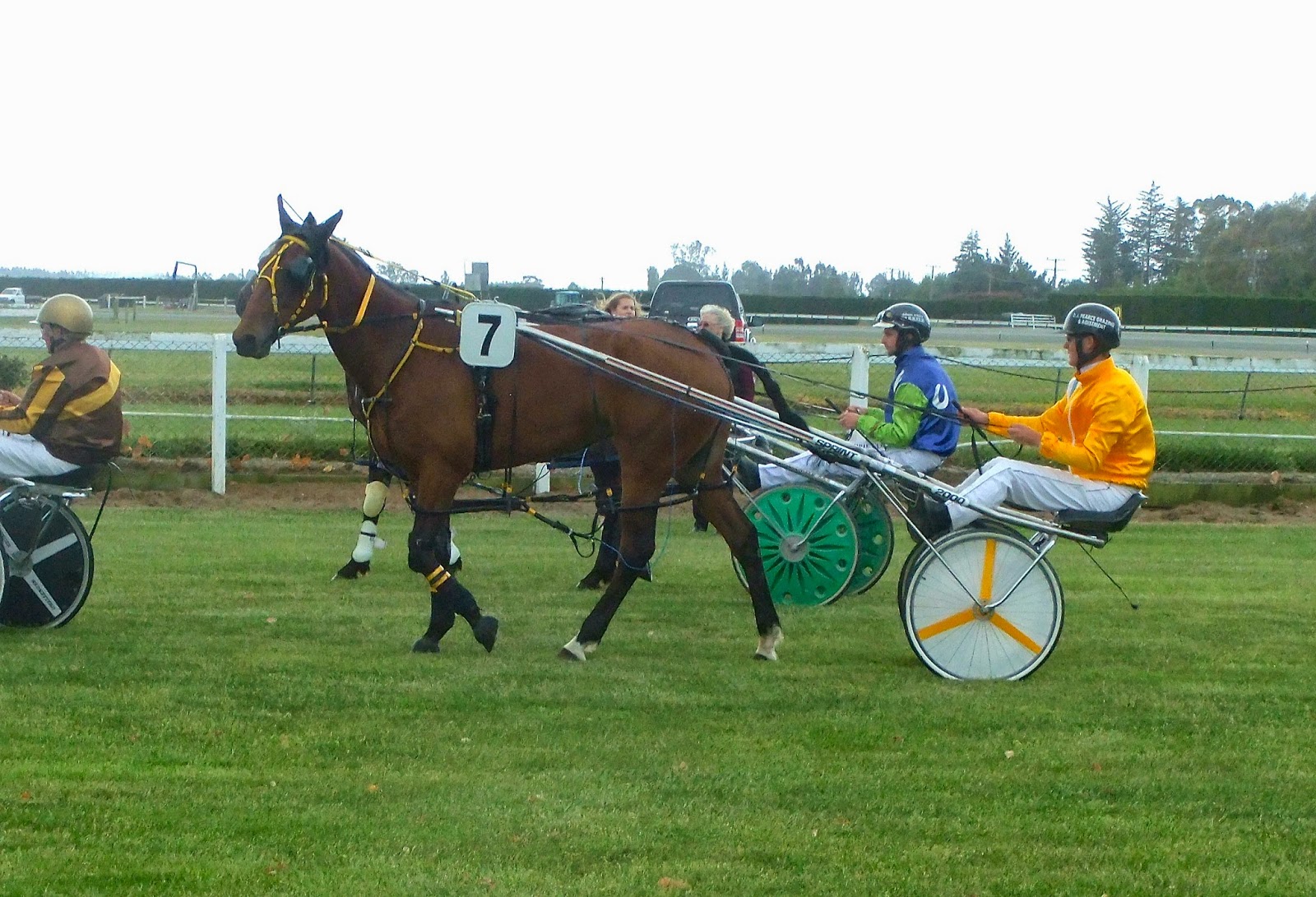 Punters don’t back our horses, tipsters don’t tip them. Agnes had had three placings in her last five starts, most of the others sported a lot of zeros. But she was eighth favourite of eleven when they headed for the start. And the rain started (briefly)… and the wind blustered (determinedly) …

She got away from the start pretty well, and was tucked in the one-one until the champion driver, Dexter, decided to take his horse to the front, leaving Agnes in the ‘death seat’ outside the leader. Ouch. What would Chris do? Well, fate and the wind decided for him. As they raced down the straight for the first time, the wind gusted and prematurely took Agnes’s hood and earplugs with it! That, to a horse, means ‘go!’ and she went! For the whole final lap she laid it to Dexter’s horse, which was well and truly cooked by the final turn and disappeared backwards. Agnes led them down the straight, but in the last hundred metres the effort (and the truncated preparation – just two workouts) told, and she got bombed just short of the line. Second! Great delight in the Gerolstein camp. Seconds are good. You don’t go up a grade … But I was just happy that we have a competitive horse, and I’m sure she’ll run some nice races in the coming months. 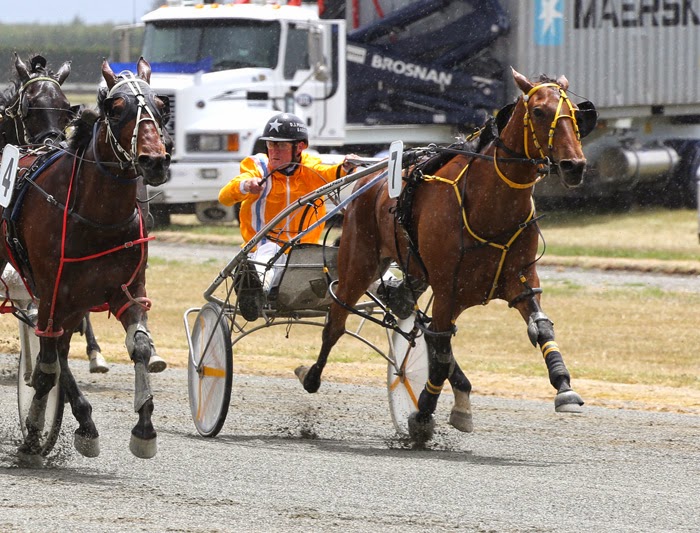 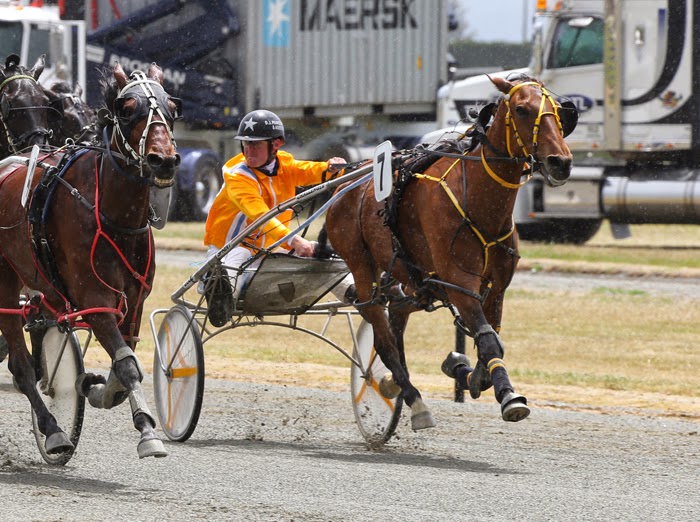 Home. To find that Richie and Johnnie had unlocked their gate and gone for a nice wee gourmet tour around the track…  horses!

Well, tonight its Mikie’s turn. At Motukarara. Against much better opposition. He usually takes a few starts to ‘warm up’ …  and then Tuesday, Rocky and Thomas to the workouts … its going to be all go. But Agnes has set us off on a positive note …

Posted by GEROLSTEIN at 11:40 AM No comments: