And here are the results. I wonder if anyone picked them correctly! 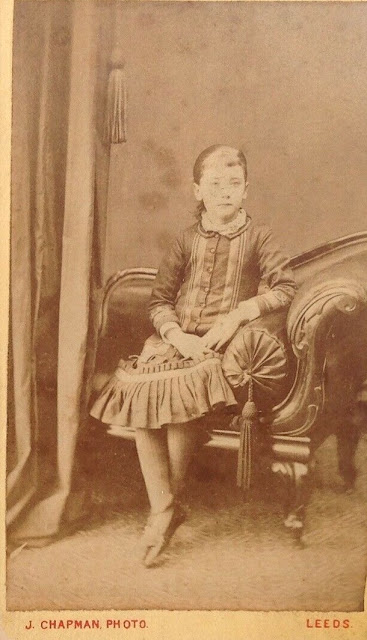 In 1895, she married William Salkield, from York, son of a joiner and himself a railways clerk (d Solihull 12 January 1957). His eldest brother was the assistant city surveyor. They had two sons, Charles Leonard (22 July 1899) and William Harold (29 April, 1900). Edith died 16 May 1943 in Solihull. Charles became ‘works manager for A B Warden Birmingham, bedsteads'), Harold joined the RAF. 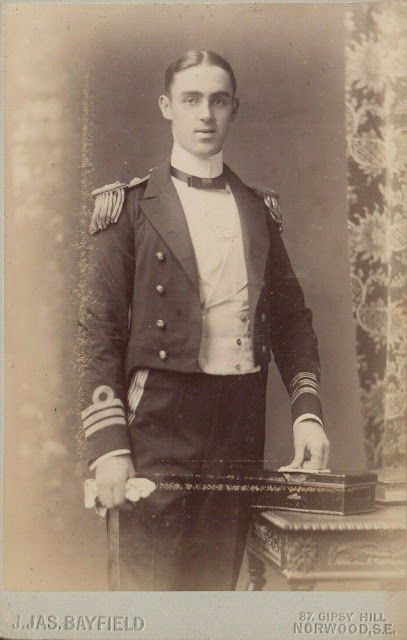 Francis Ormsby INNES (b Esquimault, Victoria, BC 14 October 1877) was born in Canada, to James H Innes of the Royal Navy and his wife, Ann.

Some time in the 1890s, the family returned to Britain, where this photo was taken in 1899 (it’s dated). I’m not sure why Fred is dressed in naval (?) uniform. He was a bank clerk. For many years. Subsequently rising to Bank Manager. He married Ada Emma (née Clement), fathered three sons, and died 24 August 1945.
In third place, photo number 1. 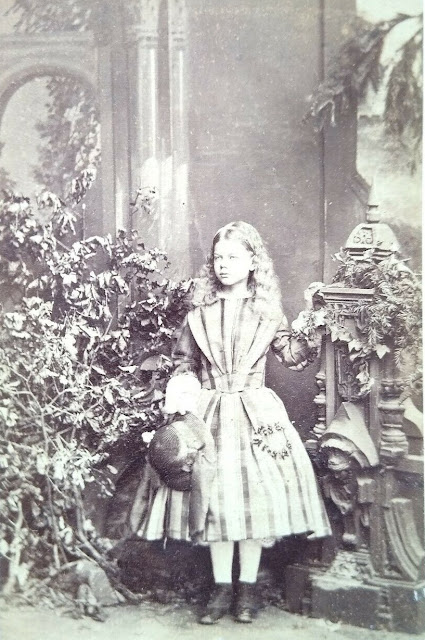 Edith Rose ROBINSON was born in India (b Madras 9 or 19 March 1856), but she was not an army child. Her father, James Douglas Robinson (b Edinburgh 23 April 1821; d Kent 13 July 1894) was sub-collector and joint-magistrate at Canara, his mother (m 7 March 1854) was Gertrude, daughter of the Rev Alfred Fennell BA, and she was the second of their ten offspring. I haven’t properly investigated the other surviving eight, but brother Herbert (b 1859) of the Madras Police married the daughter of a major in the 6th Bengal Cavalry, sister Ethel Leslie (1861-1953) married Bombay-born Henry Oliver Duncan Davidson, who was to become a long-serving schoolmaster at Harrow, sister Mary (1865-1946) married Captain (later vice-admiral and Sir) Randolph Frank Ollive Foote (1853-1931) of the Royal Navy, sister Mabel (1867-1931) wed Hon Frederic Gordon son of Lord Gordon of Drumearn and brigade master of the 6th Gordon Highlanders in Malta …

Edith ‘only’ married a 46-year-old widower with a handful of children, but he was a Lieutenant-Colonel in the 29th Regiment of the MNI. And they were married by the Bishop of Madras at Ootacamund. Edith and James Henry Prendergast added three more children to the family … He died in retirement 12 December 1910, and the much younger Edith lived on till 1944 (4 June), when she died at The Spinney, Camberley. 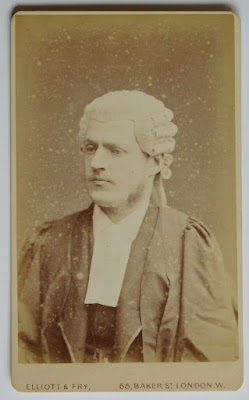 Slade BUTLER (b Rye 1 November 1849) was the son of a provincial solicitor, George Slade Butler, and his wife Elizabeth, daughter of Charles Wells Lovell ‘of Pentonville and Gray’s Inn’. He graduated BA from Christ Church, Oxford, in 1874, was called to the bar at Middle Temple in 1877, and spent the whole of his life and career as a barrister in the London Courts without leaving any dramatic marks, merely a mention in week after week after week of law reports, as defending or prosecuting one insignificant wretch or another.

In fact, although he was seen in higher courts than his father, he did not garner a corner in the Dictionary of National Biography as the elder Butler did. George, however, owed this distinction not to his soliciting, but to his activities in the field of antiquities and archaeology.

Butler jr remained, as did both his brother and sister, unmarried, -- all three can be seen with 90 year-old mother in Hampstead in the 1911 census -- and it is to sister Margaret Jane we owe this photo. It is inscribed on the back ‘brother of godmother Jan(i)e’. I see mother died at 98 in 1919. Slade followed her at the same address 67 King Henry’s Road, 6 December 1923. Margaret Jane … I don’t know.

And the baker of the week is … photo number 3. 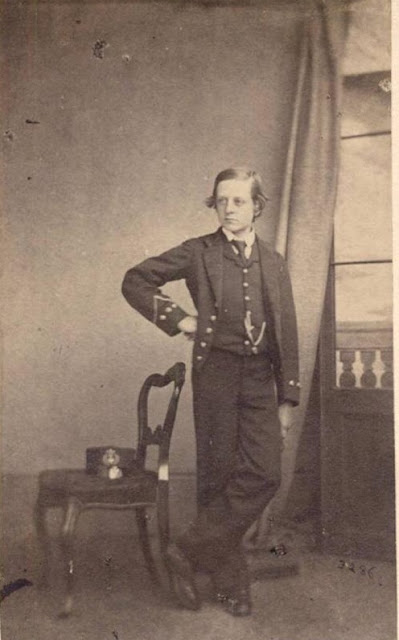 The family shifted from Bournemouth, to Sunninghill, to Hawford, Llandrindod … Arthur died 7 December 1930 at Brislington House, Brislington. Eveline survived him and died in Wales 9 December 1938. I suppose their son Major Hubert Arthur got the fortune.

Well, there we are. Even if no one wants to play my game, if this rain continues, I’ll do another tomorrow …

The winner of this one was the amazing Allister Hardiman who only made one error ... he underestimated the Irish. I, myself, would have picked little Miss Robinson who looked set, even at nine years old, for a wealthy marriage!

Posted by GEROLSTEIN at 5:23 PM