.
For some half a century these two delightful pictures have adorned the walls of my various homes .. from Fielding House, London, to Les Arabanes in St Paul de Vence and, now, at last, on the other side of the world, at Gerolstein, Sefton, New Zealand.

I've always known what they were. Costume designs by Australian artist Loudon Sainthill for Harold Fielding's production of Cinderella at the London Coliseum. A first-night gift from the artist to Harold's partner in production, Ian Bevan, by way of a 'thank you' for getting him the job. 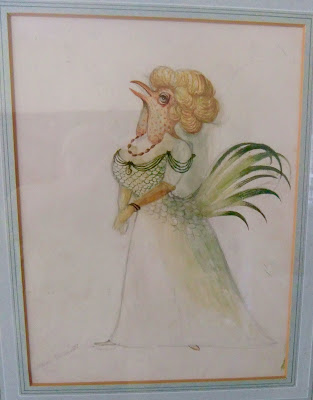 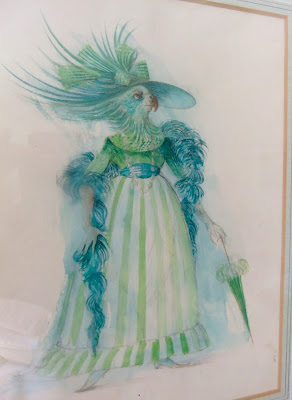 Of course, I was a prep-school laddy in 1958, and had not yet ventured into the big wide world of the theatre, or indeed to London, so I had never seen this apparently splendid production (which borrowed the 'flock of geese' idea from Li'l Abner) and never quite understood how vaguely anthropomorphic birds had been worked into the plot of Perrault's story. But, today, while I was dipping into Cinderella productions of that era, trying to identify the actors in last week's unnamed Ugly Sister-cum-Baron picture, I stumbled over this ..

Buttons (T Steele) with various fauna. I imagine my fowl were part of the flock ...

I also see that the V&A has some of the papers and scripts from Harold's files. Purchased (?) from someone called 'Mullock's Ltd'. Those boxes sat for fifteen years, closely guarded by Mrs Fielding, Jeanette her assistant and me, in the attic office next to mine. I wonder how Mullock's got hold of them. I wonder what else they have got. Well, they haven't got everything ... when the ship was sinking, this little rat packed a bag ...

And now, everybody is dead I suppose. Excepting the inimitable Tommy and ageing me ...  it is time for the myths to begin. There is no one left to gainsay them ...

But I have these two sweet pictures. What will become of them?