A long time between blogs

It’s been a long time between blogs, hasn’t it.

Mainly because there wasn’t a lot to blog about during this very indifferent hot-n-cold, grey-n-gold antipodean summer.

It has not been the most successful or exciting horsey season at Gerolstein. Mostly so-so racehorses and a whole heap of bad luck have kept success on the racetrack away, and my own beloved beasts … well, Elena, Wanda and Boris are all ‘resting’. Elena curbed a hock (the penalty, I fear, of her large size), just when she was starting to get things nicely together on the beach, and Wanda and Boris were both judged to ‘need more time’. Little Fritzl and Seppl are eating grass too, over in Motukarara, but they both – like Wanda and Elena – should hopefully be back in warm-up action more or less about the time I set sail for Europe (6 February). Gwen and Duchess (below) had a year off from baby-bearing, so they and I are having to make do with ‘other people’s babies’ (we have three beauties on the farm) for now, but they came home last week in foal to the French stallion Love You, so this time next year we will -- hopefully --have two fine Friwi foals. 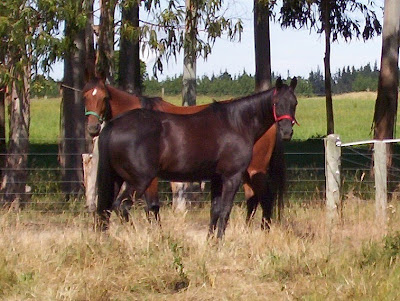 We’ve had a horse lose its driver, a horse fall through the fault of an incompetent (other) driver and animal, we’ve had a horse caught in an electric fence (and it cost me 20 jolts of electricity to get him out), but the worst event of the horsey summer, was the loss of little Peggy, who died just after I posted her picture on this blog, aged five weeks. We are due for some luck! But that’s racing.

So 2007 is nearly over. It has had some high spots, some (including my first ever motor-car graunch) not so high, but I look forward to doing better in 2008. And, of course, I shall tell you all about it.

Bonne année!
Posted by GEROLSTEIN at 2:12 PM No comments: