Liza Jane from down Stepney way ...

.
Well, its been a funny old day. Grey mist in the morning, pouring rain before lunch, sunshine in the afternoon, pumpkin-gifting, bonfire-prepping, Blood Book posting-out ... but still time for three cups of green tea, and another photograph ... which turned up, again, surprises. I'd had enough of the East India Company and Burke's Landed Gentry, so I winkled out a nice, plain, motherly, ageing lady from the East End. A bit of an easy one to track down, I thought, because she had the unlikely surname of Spon. 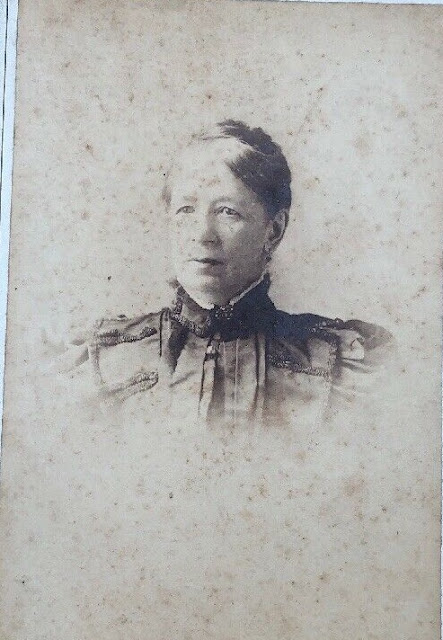 Mrs Spon. But someone had helpfully pencilled 'née Valentine', so it was just a matter of riffling up the records ...

Eliza Jane VALENTINE was born in Shoreditch in 1823 (14 November), the daughter of Robert Valentine, a joiner from Devonport, and his wife Catherine Leroux née Pardew. 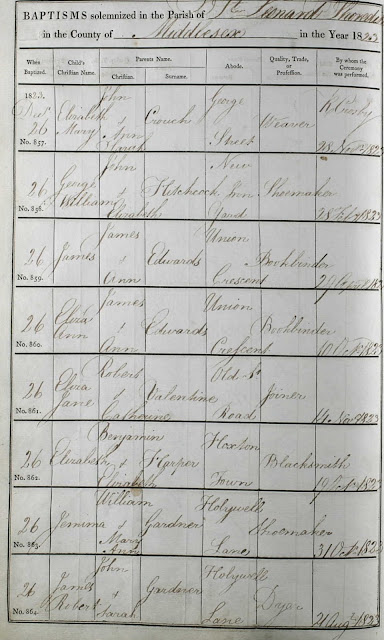 Seems I'd got my wish. Definitely no Indian army there. Old Shoreditch Road. And daddy a Devonshire joiner. But Robert [Horwood] Valentine (d 62 Albert Rd, Dalston 5 May 1868) was not going to stay all his life a joiner. When the metropolitan police force was set up in London, he became an inspector in the K Division. I see him in 1837 witnessing in a case of drunken affray, and in 1841 in court in a case of cabinboy murder. By the 1851 census he was describing himself as 'retired inspector' but in 1861 he is what seems to read an 'inspector of nuisances'.
Valentine and his wife (married 4 August 1822) seemingly had nine children over the first twenty years of their marriage, and Eliza Jane was the first. Two of the others emigrated to Australia and New Zealand (one to my birthplace, Wellington), so I suppose that now is the moment to say, contrary to my usual moans about amateur genealogists, that this family has been largely and fairly efficiently investigated by its descendants. Well, we 'colonials' like to trace our forebears back to the real world from which we have escaped! And, joy! There are photographs of Robert the copper, and his wife! 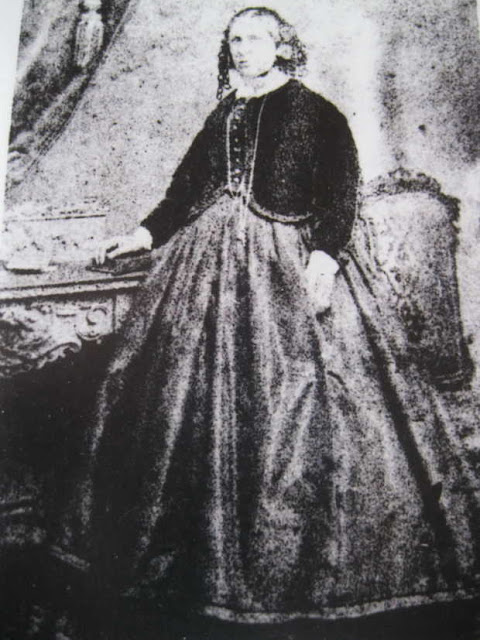 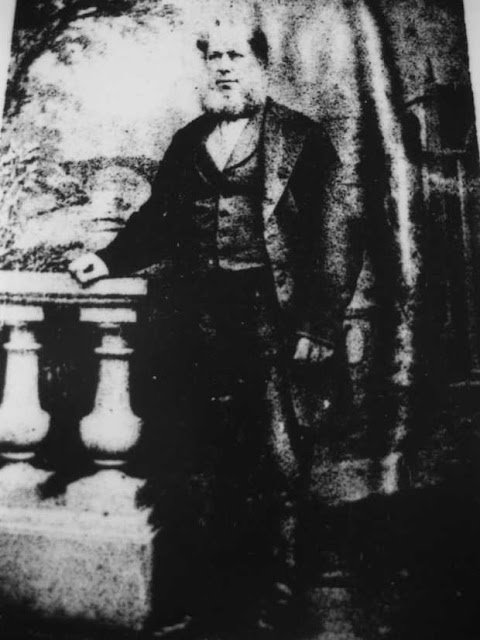 But on to Eliza Jane. She married 16 May 1847 and she married ... a musician. Henry Ulrich Spon (b Tower Hamlets 24 September 1824; d May 1883). Mr Spon described himself as a professor of music, organist and teacher, but I have a feeling that he didn't profess very lucratively, because Eliza went to work as a governess, and later, for many years, as a schoolmistress. He fathered two children: [Henry] Ernest [Ulrick] Spon (b 1 August 1849; d 1890) and a daughter who died aged six.
Now, I'm not sure about Henry Ulrich. Spon is a rare name in London 1860. Henry Spon even rarer. So who is the Henry Spon who spent ten months in a lunacy asylum in 1863-4? Who the Henry Spon jailed for larceny as a recidivist in 1877? Yet our Henry was deemed respectable enough to be honoured on the Valentine's gravestone ... 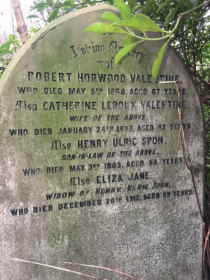 I wonder who paid for that ... and why they misspelled him 'Ulric'.

Anyway, Henry, as you see, died aged 58. Eliza was 61. Is our photo before or after her widowhood. I tend to before.

Eliza lived on. Her younger sister Emily (Mrs Christopher Grossman or Groffman Sands) had died in 1881, and Eliza took in her 11-year-old daughter, Emily Rachel Sands (b 11 November 1869), who duly went to work as a schoolteacher. Then there were, in her widow days, Eliza and Eva Clancy from Sligo. In 1911, she was still living with the Clancy girls. Pupils?

She died at 196 Clapham Road 20 December 1912. Brother-in-law William and youngest sister Delia were named her executors ...

Well, I thought, that was a nice story. Nowhere near as 'ordinary' as I'd expected. And I was folding the bookcover when .. what!

Ebay is a law unto itself. It prints the most ridiculous descriptions ('Adelina Patti .. dancer') and the vendors of old photos often commit the cardinal sin of not showing the BACK of the card. I know there are collectors who shop by photographer, but to us who are interested solely in identification .. Well, the vendor of Eliza Jane's photo (Vanessanm2006) had the good sense to show us both back and front, and when I searched the neighbouring offerings, guess what I found! Liza Jane's little brother-in-law, William. And wife. 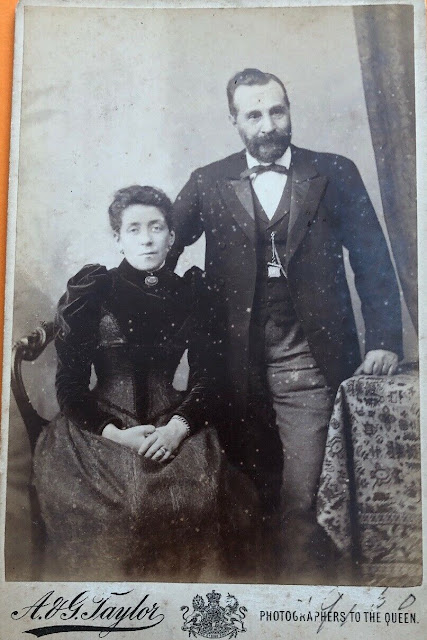 Ah, but which wife? He had three. And children by each. What age would you give him here? Is that a date half obscured at the bottom? 1860? In that case it would be wife one ... Elizabeth Ann née Scott. He looks very caring. She looks rather ill. Those shoulders don't help though. Elizabeth (if this is she) died in 1870 (16 February).

But William is another interesting one. William was a bookseller and then a publisher. A bookseller at 46 Charing Cross Road.  Seemingly in partnership with a brother, Francis N Spon. I found a photo of them in 1890 in the Booksellers Magazine 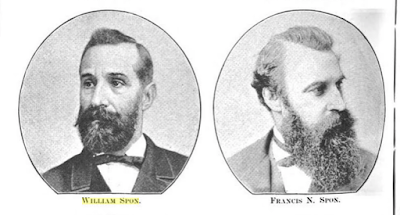 Noticeably older, but the beard in fine form. So what age is he, in our photo. Ah, well, I could go further, but other than saying that William lived until 1919 ...

Posted by GEROLSTEIN at 2:06 AM