SOME FUNNY THINGS HAPPEN ON THE WAY TO THE FORUM 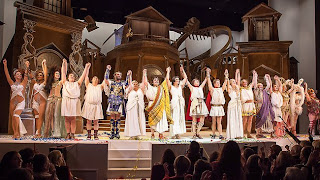 The musical play or burlesque, A Funny Thing Happened on the way to the Forum, came out when I was a Classics major at Canterbury University, New Zealand. My Latin professor played me the original cast recording, and we were delighted by its clever parody of Plautus and Terence and its tuneful, humorous songs.

Since then, I’ve been fortunate enough to see this cleverly crafted piece on a good number of occasions, and with some fine performers: some deliciously witty, others in the dumbed-down end of the pier style (oh! Frankie Howerd!), but the fine, tight libretto always floats to the top, the small cast and one-set lay out keep things equally tight and bright, and you can always bet that, whichever way you like your Forum, it will be a good merry evening out.

I saw the show last night at Her Majesty’s Theatre, Melbourne, and was enchanted by it all over again. Which isn’t to say the entire production met with my favour: it is perhaps even fair to say that the bits the audience laughed the loudest and longest at were my least favourite moments. But they obviously have piers with appreciative ends in Melbourne, Vic.

The songs were as delightful as ever, but the libretto had suffered (how dared they!) from some alterations and interpolations which went so far off the end of the pier that they should have drowned. Which is what I should have liked to do to the perpetrators. But I gather Mr Sondheim has passed by in person, so I imagine he must have approved. Mr Gelbart might have had other ideas. The audience howled with laughter at the bits of ‘ad lib’. I didn’t.

Forum has several large – and one very large (and, thus, no need to be larger) – roles. But the smaller parts are grand, and a skilled actor can scene- (and show-) steal in a small part. This happened last night. While others were shouting, gabbling, camping, shrieking, Bob Hornery tiptoed on in the little role of Old Erronius and showed just what can be done by an clever actor with a quiet, gentle well-timed twinkle, a comic look, a word, a line. He quite won everybody and we applauded his every entrance. Wonderful! 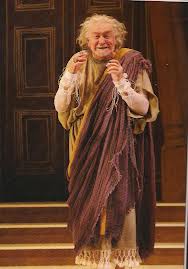 Another who didn’t succumb (mostly) to the penchant for the pier was Adam Murphy as the Miles Gloriosus. It is a part which demands an impressive physique and an impressive bass-baritone voice (Ah! Leon Greene!). This fellow has plenty of both, and carried the role off splendidly.

The semi-straight juvenile parts of Philia and Hero can easily fade into the middle-ground behind the feverish comedy of the evening, but not here. Philia (Christie Whelan) towering blondely and deliciously over her boyishly amazed Hero (Hugh Sheridan), like an Ulla from Crete, sang and acted quite beautifully, and put ‘the virgin’ right back where she belongs at the centre of the action. Another of my ‘best evers’. 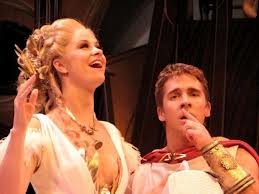 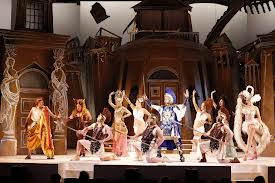 The Senex (Shane Bourne) looked fine, sang and danced enjoyably, and – apart from a bit of music-hall foolery – acted most convincingly and appealingly in a mixture of English, American and Australian. Magda Szubanski as his wife looked wonderfully voracious and gave her one number in a zingy kind of cabaret routine which seemed a bit out of the show's style. The role of the brothel keeper Marcus Lycus is a tricky one for me. I can never forget Fred Evans, 30 years ago, stealing the show in the part in London (Australian Fred! Where are you?). But tonight he was made sufficiently oily and amusing in a rather different style by Gerry Connolly.

Which leaves us with the two principal roles of the piece, Pseudolus  (Geoffrey Rush) – the classic naughty meddling slave of Classical drama – and Hysterium (Mitchel Butel), his -- everybody's -- trembling fall guy and straight man.
Straight is perhaps the wrong word to use in connection with this pair. I don’t know if it was the actors’ idea or the director’s to play the two roles as frenetic, ultra-camp, wrist-flapping, shrieking, talk-so-loud-and-fast-you-cant-understand clowns. Zero Mostel, Jack Gilford, Kenneth Connor … they were clowns, yes, in these roles, but with what subtlety the two latter had their nervous breakdowns, with what winsome tact, Mostel put his dubious propositions and machinated his plots.

That’s not to say the deeply-low comic style cannot work – Hysterium had some very funny moments indeed as the fake Philia – but BOTH the principal characters, working the same style, ALL of the time. Rather exhausting. Relentless. And both giving the evening little variety, and the opportunity to a clever quiet performer to provide the contrast and steal the show. 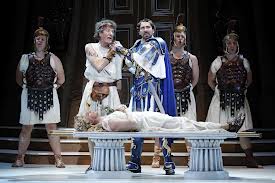 And then .. Oh, well, maybe I’m the only person in the world who doesn’t find stage portrayal of vomiting, defacating, various degrees of simulated sex (accompanied by childish ad libs) etcetera to be funny. They’re usually covering lacks elsewhere. I guess that's my problem.

But hey, I had otherwise a good night. And if I go home remembering especially the skills of Erronius, Philia and the Miles Gloriosus, the bubbling band, the pretty girls, the always hilarious Proteans, the best of Gelbart’s lines and the merriest of Sondheim’s songs, that’s my choice. From the reaction of the audience around me, others will go home delighted with the pantomime antics and music-hall jokes and the ‘live’ performances of local TV and film players … and why not?

It all depends what kind of ‘Comedy Tonight’ you prefer. 'Something for everyone....!'
Posted by GEROLSTEIN at 9:27 PM No comments: 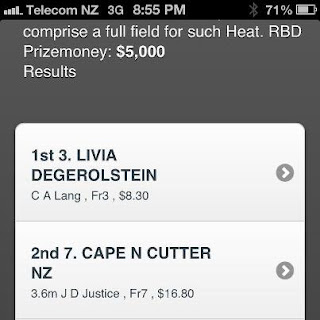 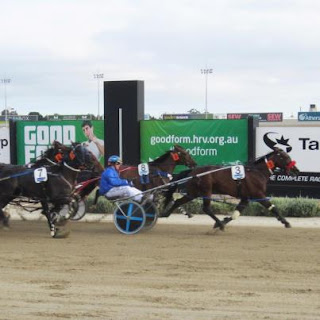 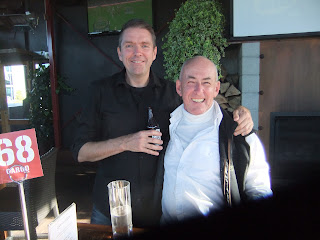 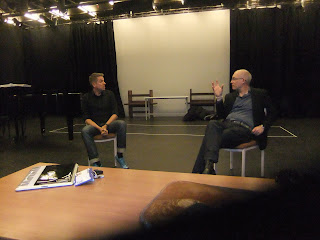 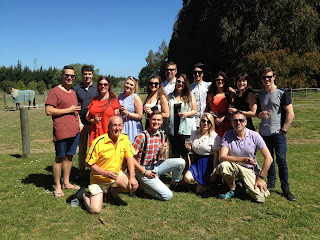 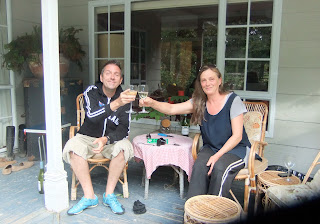 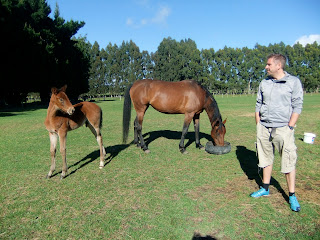