.
Here's today's picture. Yes, I'm still playing the 'who's who' of Victorian cartes de visite. This lady looked so handsome ... and I had no problem reading her name ... she was photographed in Devonport, and I've always liked Devon ... so she gets today's spot. 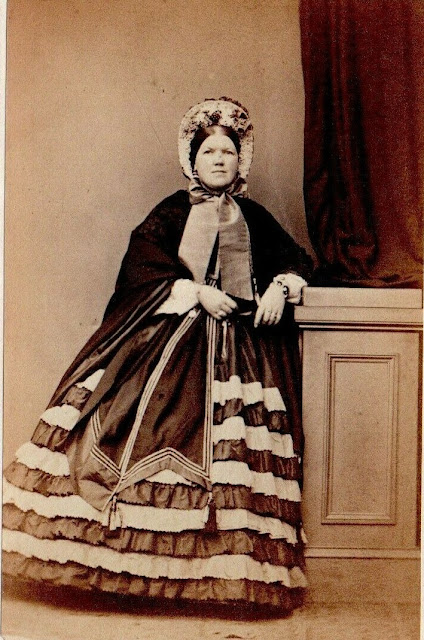 Her name was Martha. Martha Bryant, of Tavistock, Devon. Later Mrs Martha Prideaux.  Once again,  I think the name pencilled on the verso of this carte might not be contemporary with its taking. But I suppose .... Martha didn't become Mrs Prideaux until she was 30. But then again, she was 30 in 1854. 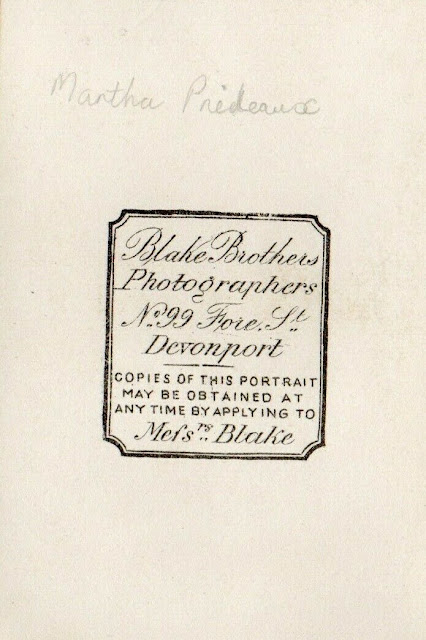 The vendor plumps for '1860s' and I suppose it has to be. That seems to be when Blake Brothers floruitted. So Martha, here, would be around forty. And the mother of six daughters! Not bad.

But back to the beginning. Martha was born in Tavistock, 14 February 1824, the daughter of James Bryant (1800-1875) and his wife Sarah Whitchurch Bennett (1800-1866). The family, being rather genteel, can and has traced it roots further back, but I won't go there. I'll just say that Bryant was involved in the sugar trade. The 'Plymouth Sugar Refinery' (Bryant, Burnell & Co) which mutated into a limited liabilty company, in 1856, as the 'British and Irish Sugar Refinery Co Ltd'.

James describes himself in the1851 census as 'sugar refiner occupying 150 arable 200 acres common land, employing eight labourers'.
The worldwide web tells us that 'a few weeks before that census:

'In the parish of Manaton, near Widdecombe on the moor while some men in the employ of James Bryant, Esq., of Prospect, at his seat, Hedge Barton, were removing some accumulations of way soil, a few days since, they discovered what appeared to be a grave. On further investigation, they found the skeleton of a body, which proved from enquiry to be the remains of Ann Jay, a woman who hung herself some three generations since in a barn at a place called Forder, and was buried at Four Cross Lane, according to the custom of that enlightened age'. 'The grave was opened by order of Mr. James Bryant in the presence of his son-in-law, Mr. J. W. Sparrow, M.R.C.S. Bones were found, examined, and declared to be those of a female. The skull was taken to Hedge Barton, but was afterwards placed with the bones in a box and re-interred in the old grave, a small mound raised with head and foot stones erected at either end. Such is the present appearance of the grave.'.

The place has apparently become a part of Devonshire folklore and turned into a ghostified tourist spot.

Mr John Sparrow, who was the husband of Bryant's eldest daughter, Ann, declared on the census sheet that he was a 'lead? and limestone merchant, member of the Royal College of Surgeons, London, licenciate Apothecaries Hall'. 'Not in practice'. In that same census, Mrs Bryant, with younger daughter, Martha and baby Sparrow, is at home at Prospect Hall, in the tythinge of Pennycross. As for the sugar, I had some idea that James was growing sugar-beet on his 300 acres with eight labourers, but no .. here, in 1852, is the report of his company's ship arriving at Plymouth carrying 3,000 bags of raw sugar from Mauritius ... so, somewhere in the Plymouth area, Mr Bryant refined it. The newly limited company company went from the control of Bryant sr, to his only son, and to his secretary, George Prideaux, until they dissolved partnership in 1866.

And having spent the afternoon researching that, I find there is an excellent biography of James on line at https://www.wikitree.com/wiki/Bryant-7734. And he's even bigger than I thought. He owned a chunk of St Katherine's Dock, London, which he willed to Martha!

George Prideaux born Plymouth, 16 December 1822, to Phillip Cookworthy Prideaux and his wife Esther née Bowden, declared himself in that same 1851 census to be a 'gentleman' of 7 North Street. Nearly 30, and unemployed? Or a gentleman of leisure? Anyway, by 1854, he was being described as a 'sugar refiner', which I guess he had been for a little while, because he had got to know Miss Martha Bryant sufficiently to marry her.

So here we are, at Martha Prideaux. Photo. And really nothing more to say, except that she mothered six durable daughters and lost her husband 9 November 1868. He left her a meagre 450L. She lived out her remaining forty years in comfort and died, aged 84, at 1 Mutley Park, Mannamead, Plymouth on 12 May 1908.

There's not a lot that I have found amongst the daughters tales to tell. Mary's wine-merchant husband ran away to New Zealand at the start of the war, abandoning her and their daughter Hilda Beatrice (b 5 July 1895; d Hove 1986 Mrs Douglas Walter Adam). Isabelle and her Anglo-German husband quit the country for the sunny sloped of California. Beatrice married ... guess what! A gentleman from Jorehaut, Assam (1845-1899), who I supposed had to be Indian army. But no! He's 'superintendant of the Jorehaut tea company'. The maiden ladies, Esther and Mabel, lived longtime together ...  oh, and once the Bryants had got out of the sugar refinery business, it went down the gurgler.