for the next two to three months... 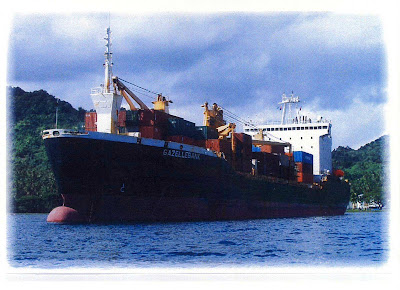 My friend Florence snapped our dear old ship during our last trip, and had the good idea to use it as her Festive Season card!
Posted by GEROLSTEIN at 5:06 PM 3 comments:

.
Well, my horsey season in New Zealand is nearly over and I have to say it hasn’t been marked by very much racegoing, nor indeed by many exploits from my horses. In fact, not one of them ever got to the races. Two of them have trialled, but …
I’m too sentimental to be in this game, but sometimes you have to bite the bullet, and so I have reduced my home team to just three and a half horses.
Boris has left us, to be trained in Mosgiel and race in the south. He has won at the workouts, but hasn’t yet appeared on race day.
Wanda has gone north, to Auckland, and is in work at Pukekohe, prior (this time?) to a debut.
And Gwen, the mother of them all, leaves in March. After giving me five foals, including the demon Duchess. Duchess is the half. She has produced two glorious babes (Fritzl and Lucie), so she has been leased to the Dubois family of France, owners of the great stallion Love You, for a year. Which means she is still here, as a boarder, pregnant again, but not with my child.
The three that are left? Why, the two new Gerolstein babies, Lucie and D’Arcy, who went through the trauma of freeze-branding recently 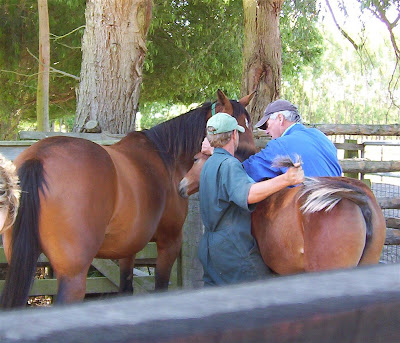 But now they are gambolling out in the hay paddock in happy fashion, until the big day of weaning comes in March. Life, however, cannot be all gambolling. They should meet their future trainer for the first time this week.

And, of course, Elena.
Elena should have been a racehorse by now. After her first colourful workout, she ran two others (one even more colourful) and showed us that qualifying to race would be a formality. But after the last one she took a long time to recover, so we decided to have the vet look her over.
Pharyngeal hemiplegia. In layman’s language, a paralysed throat. How she ever ran as well as she did … So instead of going to the qualifying trials lovely Lena went to horse hospital, for a sizeable operation. When she came home, the wounds in her throat (open) and neck (stitched) were somewhat gruesome to look upon, but after I’d tended them for a few days (warm salted water, and minutious de-scabbing), they began to close rapidly, and were a little more photogenic: 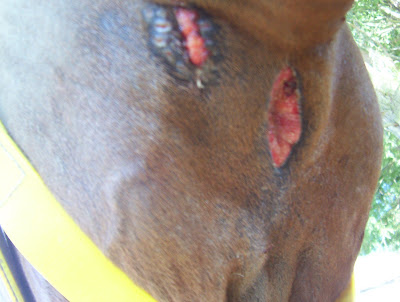 Now she is well on the way to recovery and getting daily less wan. But, of course, there is no question of training for several months until the internal scarring and the prostheses settle down… so maybe NEXT year when I come to Gerolstein the debut so longed-for will finally happen?

But there’s still plenty happening right now.
Wendy is breaking-in the yearlings and this morning they went out on the track, with a cart, for the first time in their lives, under the watchful care of Uncle Barney McRubble (lead horse). 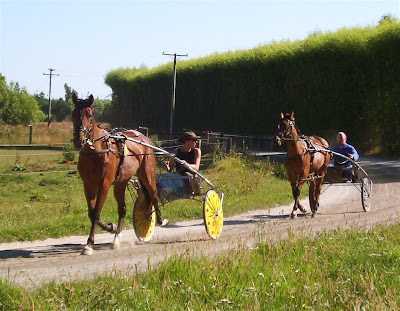 There were fine moments, as with little Sarah (above), but also – as always – some problematic ones, as with madcap Mikie (below). 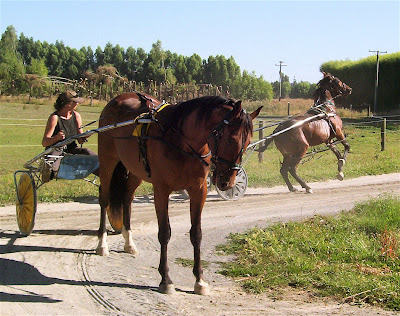 All part of the day in the horsey world of Gerolstein. From which I had best draw the fullest joy in the fortnight left before I hit the high seas again...

What happened to the rest of December?
What has happened to two-thirds of January?
What happened to my stay in New Zealand? In two weeks I set sail again on the good old Gazellebank heading via the Red Sea for Hamburg, Europe and most of 2009.

Of course, most of what has happened during my stay at Gerolstein has had something to do with horses.
Even Christmas Day (which we don’t observe) was marked by our three yearlings getting their hohohos by destroying a fence line.
But New Year’s Eve was celebrated in a wholly unhorsey way by the most important event of the season, and it took place on the other side of the world…
On 31 December 2008, in Leicestershire, England, my beloved younger brother John and Greg, his partner of forever (well, 37 years is pretty much forever) were officially, and with quiet ceremony, joined in the male x 2 version of marriage. The first marriage in my direct family since … my parents! 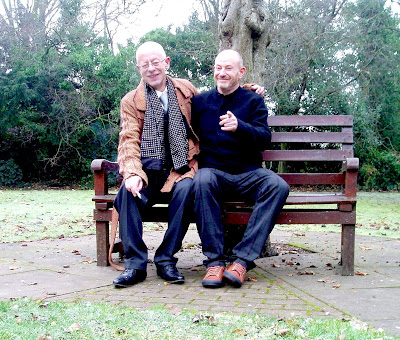 How I should have loved to have been there.
And, sitting here, raising my first glass of champagne since my self-imposed 2 ½ month ‘dry season’ to them, I can’t deny just a tiny pinch around the heart. Ian and I (who, of course, were cut short at 31 years of life together) never did go ‘legal’. But I guess we were as good as…
Posted by GEROLSTEIN at 11:00 AM No comments: