Is hot. That’s my excuse, anyway, for no blog for ten days. And even now I’m going to be stickily short, because its 6pm and definitely time for something cooling. Like two cold showers and the whitest Bugundy in the house. For the temperature has been in the thirties, and the weather punctuated by several dazzlingly lit-up thunderstorms.
And I haven’t been lazy!
I’ve been three times to the Bibliotheque Nationale with Christophe; and Jean-Baptiste, intent, since day one of my now week-old visit to him on the topside of Paris (10ème), on filling in a few of the gaps in my education, has shepherded me to see the Nymphéas of Manet and the amazing (and sensibly undersized) exhibition of early 20th century art at the Orangerie, and then to the Musée Cluny, which specialises in mediaeval art and artefacts. Fortunately, on this second occasion, we had Pierre (who is an expert on the period and on every Saint in the panoply) with us, and what could have been an incomprehensible and rather boring succession of religious images was made totally fascinating. I don’t know how the rest of the public manages, for this museum (like the Orangerie) is decidedly lacking in readable explanations. They should take a few lessons from the Jersey curators.
Anyway, for someone who still (after 30 years of Ian’s tuition and wisdom) knows little about art and the appreciation of it, I truly enjoyed both visits.
However, what I liked best was the morning when Jean-Baptiste and I took a stroll through the nearby (to here) Park of Buttes-Chaumont. A lovely piece of green-land, unfussily laid out and strangely un-noisy. For Paris. We wandered along the various woody paths, and finally arrived on the top of a (real?) cliff, under a mock C19th folly, from where you could gaze out towards the spires of Montmartre. Don’t ask me why I thought of Julie Andrews and her Sound of Music folly, but I did. Jean-Baptiste wouldn’t let me photograph him (this has got to change), so I’m afraid it’s another photo of me. 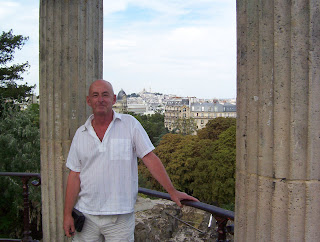 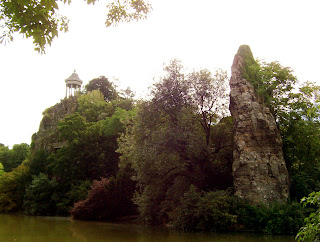 After we came down, we sat and lengthily sipped cold beer at a street café, and I have to admit that I thought ‘bugger Manet, bugger the Louvre, this is Paris for me’. I know, I’m a Philistine. But I am trying. I even watched an entire movie (and those of you who know me know that that is little short of a miracle) about the Mexican artist, Frida Kahlo (if there’s one thing J-B is hotter on than art, it’s Mexico) and if the male star hadn’t been someone I once sort of knew (Alfred Molina) I could almost have believed it.

But don’t think that’s all! We’ve had Jean-Baptiste’s birthday, we’ve had a trip to the poshest parfumier in Paris where I spent a month’s income on 100cl of ‘artisanale’ perfume (hello, mum!), we’ve had a trip to Enghien – J-B’s first ever taste of racing -- to see Jack’s horse, Porto, run into the money, Rosy ran a second race (once again miles away), perhaps a tad too soon and off a 25 metres handicap, and still ran into a small cheque, and, well – if you take away all the time spent on café terrasses and in restaurants .. hey! this is Paris! .. what else has there been time for?

When in Paris (tra la la) … I think Cole Porter would have been proud of me.

One way and another.
Posted by GEROLSTEIN at 9:15 AM No comments: