Or Ganzl. Or, it seems, Gansl. Or, I've just discovered .. Gánsl. For a man who spends a large part of his life, delving into the genealogy and personal facts and figures of other people's lives, I've always failed signally when it came to my own family history. My brother and I had resigned ourselves to 'never knowing', since, years ago, my paternal grandmother told us -- and I was in my mid-twenties, already! -- that her husband, who had died before we were born, had been Jewish. Central European Jewish records ... after the war ..? Well, I didn't know.
When you don't know, you invent. And when I came upon another Ganzl (no umlaut, that was my mistake, and I'm stuck with it!), Régis by name, and French, of Swiss descent, we immediately decided we must be some sort of distant cousins. Well, I was sure Switzerland came into my tale somewhere.
Two things then happened. My mother dumped upon me a vast plastic bag of photos and stuff which had been the property of said grandmother. I glanced in. Holiday snaps. And put them on a shelf. Then I came in contact with Marie-Theres Arnbom of Vienna, operetta historian. I wrote a piece for her new book, and she mentioned her husband's forthcoming work: on Viennese Jewish families. 'Hah!', I laughed. 'Find mine!' And she did. She found me a great-grandfather and mother, and ... there was grandfather Pepi, and his boring but long-lived brother Fritz, and the mysterious Onkel Max ... and three sisters, great aunts of whom I had never suspected the existence! (It was brief). Great-grandfather was Adolf Gánsl, born in Mór, Hungary in 1844. Great-grandmother was Julie Rosenbaum from Königsberg, Bohemia, daughter of Adam Rosenbaum - great-great-grandfather .. how did they meet? Great-great-grandmother was Katharina Schweizer .. oh dear, is that how the muddle with Switzerland got into my head? All this only came on us 24 hours ago, so I've got a bit of ordering and tidying to do, but I did cast a more careful eye at Nana's plastic bag. And there they were: great-grandfather Adolf (b Mór, 1844; died Schulgasse 8, Währing, Vienna 8 April 1889). So young. 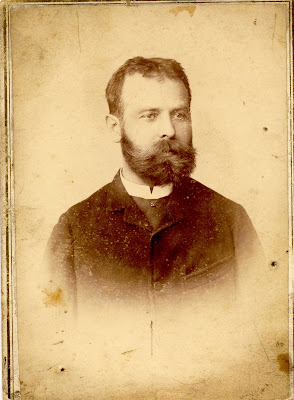 And great-grandmother Julie, died 8 Schulgasse, 5 June 1888. Oh dear. So the stories about Fritz and Max being brought up in an orphanage -- they really were five and two when their parents died. Why did I think it was a car crash. Cars were hardly invented. 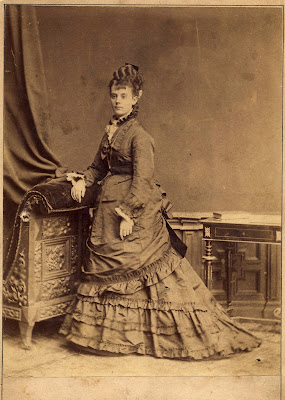 And here, look, Pepi and Max. Photographed by Grillich in the Währing Hauptstrasse. Before they were split up. Max to the orphanage, and Pepi to be brought up, as we knew from my father, by Tante Rosenbaum ... 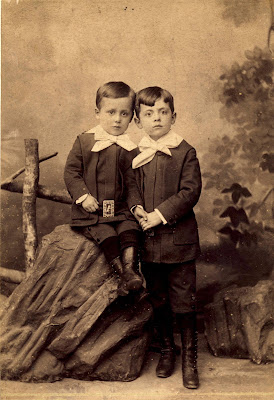 And Pepi on his wedding day, with his bride, Rudolfine Josefine Stojetz. Our Nana. Goodness, she was pretty. But strong .. and that's another story. 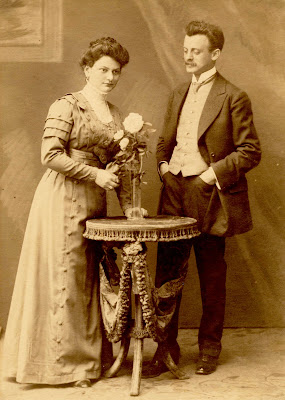 Here's the certificate, too, which confirms much of all that. 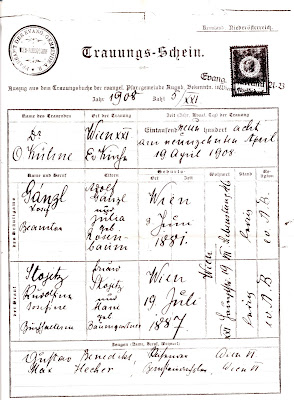 Well, we've opened the box of tricks now. We'll have to delve a little more into it. I mean, why were Adolf the Hungarian and Julie wed in Franzenbad (where the hell, IS Franzenbad ..), and why did they come to live in Vienna's Zirkusgasse, Antonsgasse, Mosergasse, Buchfeldgasse and Schulgasse? Come to that, why were they always moving! And .. Oh dear, I'll have to put aside Miss Matilda Florella Illingworth, soprano, of Yorkshire, and spend a little time on the Gánsl family! Maybe Johnny and I aren't the end of the family -- by any of its variant names ... as we thought we were!
Posted by GEROLSTEIN at 7:42 PM 4 comments:

Drama at Gerolstein, or Oh! Minnie!

.
The wonderful Woodend Fire Brigade powers down our driveway at dawn after a frantic phone call ...! 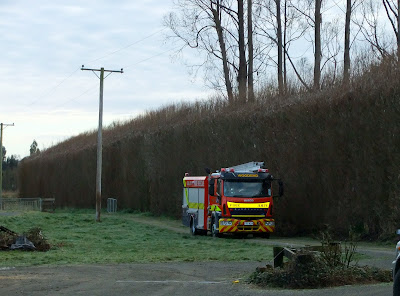 No. But Minnie has got herself up a very large gum tree and can't get down. This time her choice of time -- Saturday night -- wasn't so hot, and she spent 14 hours perched 15 metres above the ground until I could ring the sapeur pompiers! 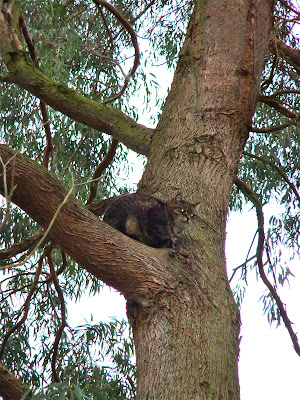 Her descent was somewhat undignified 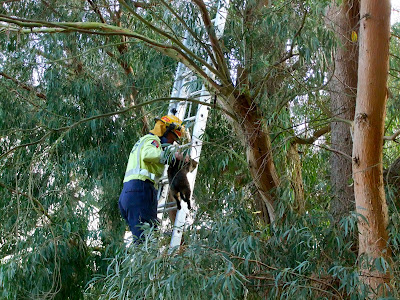 And after giving us a sleepless night, she's prancing around the place as if nothing had happened.
Oh, Minnie!

Please, it must be spring soon ..

.
A month has gone by since last I blogged ..
Not like recent years, eh?
No theatres, hotels, restaurants in 2011
The overwhelming topics of the day are my wretched health, and the pets.

I'm not going to rabbit on about my health. Although I should, because it might help someone else in a similar plight to understand a little what is happening to them. Suffice it that I'm bearably handicapped, with a few unpleasant side effects, and that from being a 'carer' I have rather become one who needs somewhat to cared for.
We shall see what the spring and summer bring. Because the recent burst of slightly warm sunshine -- after violent snow, and in spite of regular earthquakes in the 4-5 register -- has cheered and lifted me enormously. 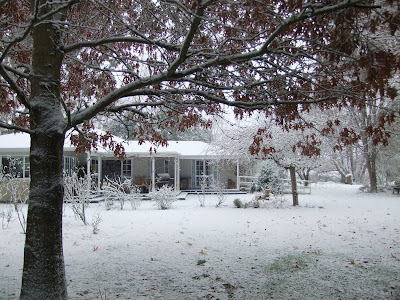 I've also been muchly cheered by the pets. Little Livia didn't make the grand final of the Breeders Crown, but she ran what the racing press called a 'massive' race for a close fourth in the B Final, and then, on the last day of the season, easily disposed of a so-so field at Stawell. Her seventh win. Now she goes for a very well-earned rest, and the baton is taken up by Seppl, returning to NZ racing after a year out for growing pains. I actually made it to Rangiora raceway for his re-debut, thus we have 'Photograph' of him lining up in the birdcage after a nice third placing. 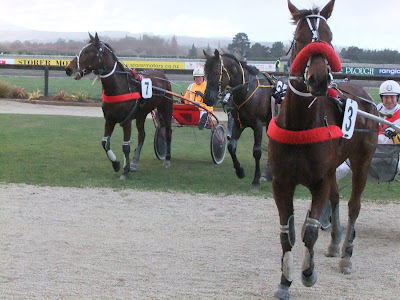 The next week, he ran a much closer third at Addington, and I think a win -- it will be my number 42! -- is very near.
The next up to the plate will be the beautiful Agnes, followed by Lucie and D'Arcy who, grown to manhood, feted his third birthday this week, before shipping out from Gerolstein to trainer Murray Edmonds to go back to work. 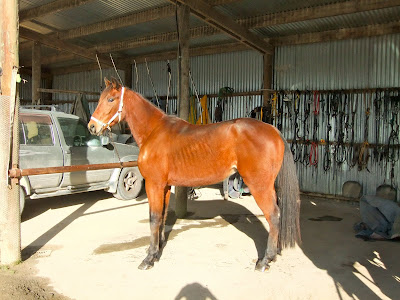 And, of course, foaling time is coming near...

We may see some breeding action n the avian world too. Mr Peacock has made the acquaintance of Dixie (Miss For Ward) and Trixie (Miss Back Ward) and has been parading his tail and making threatening motions with his nether areas non stop for a week 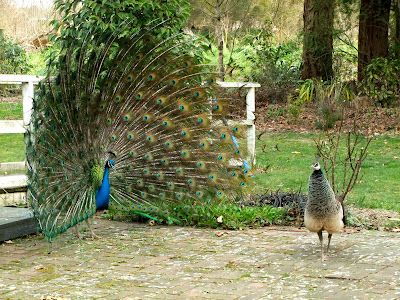 And there is just space for my special little pet. Minnie. She is eight years old -- and I remember as last week, the day she wandered on to my doorstep saying 'it's Easter holiday weekend, so you can't take me to the homefinder vet because he's closed for three days. And in three days, I'll get you ..'. She did, of course. 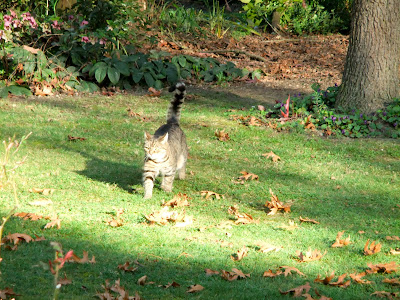 Posted by GEROLSTEIN at 5:35 PM No comments: