Up to now I've solved much of this 150-year-old photo's identity. But I'm still lacking one important element, so I'm going public in the hope that some French scholar of C19th theatre and opérette can come up with the missing piece.

It's labelled 'Women in costume dressed as man w kettle and chef fun antique CDV'. Well, the gentlemen in question mightn't be very obtrusively masculine, but they are men if, I think, rather young ones. 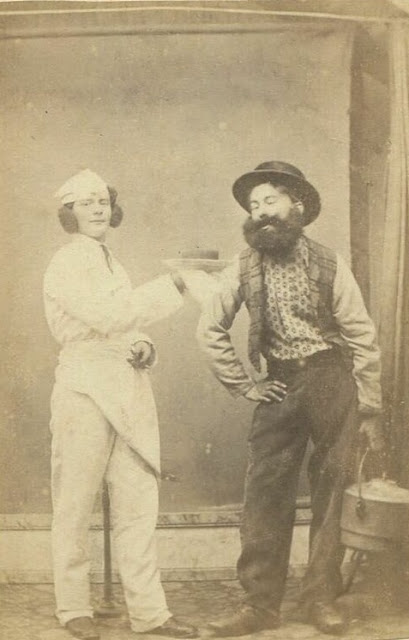 What this is, is a Swiss 'summer show' photo. In the summers of the 1860s (and well beyond), when the Parisian theatres closed, its actors, singers, musicians et al took engagements at the summery spa and seaside spots. Some of the grandest venues hired genuine stars and produced full-scale dramas and operas, with which to entertain their high-class clientele, but your average holiday place would have an orchestra, and a small group of actors and singers, who with maybe the help of the occasional 'guest' would provide light-hearted fare to add to the balls and concerts which were such an important part of 'the season'.

This picture comes from one of those seasons, in the years 1868-9, at the Swiss spa town of Yverdon-les-Bains. That didn't take any puzzling out. It's written on the verso of the card, along with the names of the seven actors of the company. I'm afraid none of them is familiar to me. I don't think Yverdon ran to the glitteracti of the Bouffes-Parisiens. 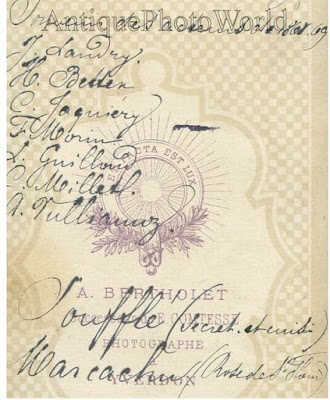 When I first looked at the photo, I was puzzled. The man with the beard looked perfect for the kettle-maker, Marcachu, in Le Rose de Saint-Flour. But his rival, in that popular little 1-acter opérette, is a shoemaker, not a cook. And it can't be changed, because the fact is central to the plot. So, what was this scene ...

Then I looked at the back, and the first thing that grabbed my eye was the word 'Marcachu'. Bingo. I was right. Well, half right. So who is the chef, Soufflé? Where does he come from? He looks just like Drogan from Geneviève de Brabant. It would help if I could decipher the words in brackets, which are undoubtedly the name his show. Secret ... what?

So, alas, this is clearly not a scene from The Rose of St Flour. Its either a composite photo of one actor in his two roles in a spectacle coupé, or two of the company in their favourite roles ...

But it is a delicious glimpse of provincial theatricals, far away from the bright lights and glory of the city theatres, in the 1860s. And, now that I've semi-identified it ... I wonder how long it will be before someone shells out the $65US for this bit of ancient Offenbachiana, and how long before it turns up in a book ...