When you come to the end of an imperfect year ...

A month? A month has gone by since I blogged? And quite a lot has happened in that month.

I am still somewhat handicapped by the sequels of my nearly nine-month old stroke – so, thanks a heap all those pundits who said I’d be ‘totally re-established in one to six months’. I am rapidly coming to the conclusion that folks of the medical establishment don’t know very much about strokes, or that every cerebral incident is different.

My reaction to this impuissance was to give up on pundits, expensive specialists etc, and only then did I start noticeably to improve. With, I should add, the help of my faithful acupuncturist and chinese herbalist. Brett Walker, take a bow.

So what’s wrong with me now? Well, my right arm, hand and frozen shoulder have regained most of their movement, but they lack singularly in strength. Lifting anything heavier than a small bucket of horse-feed, or opening a tricky bottle of wine, are out. But finally my typing is getting back to normal, which is a major fact of life for me.
Strength all round is the big thing … and weariness ... but when the sun shines and the horses win, the world is a less painful place. So, now, I just have to get rid of my neural twitch (only evident when lying down), get through next week’s cataract operation and dental adventure… and. well, post-stroke I’m on the blood-thinner clopidogrol (sounds like something a pooch would eat), so I guess I just have to put up with being covered in bruises and blood-marks, and bleeding ridiculously every time I knock myself or touch a rose-prickle.

That’s enough of the health bulletin. Except to say the sun HAS been shining and, yes, racing win number 43 came up last night.

I forced the issue with the sun, and took ten days with Barry and Rosemary in Sydney again. Training for my 40-hour flight back to Europe at the end of summer. We had a lovely lazy time, and I didn’t lift a finger (except to walk Holly the dog), so it was a limited ‘rehearsal’. I wonder how travelling and living on my own will go. We celebrated my dear friends’ 36th wedding anniversary (I was at the wedding!) with dinner at the Via Napolitana in Lane Cove (delicious) and I got to know the latest of the dynasty, grandson Harry. At 18 months, he has already developed a taste for Prada sunnies. 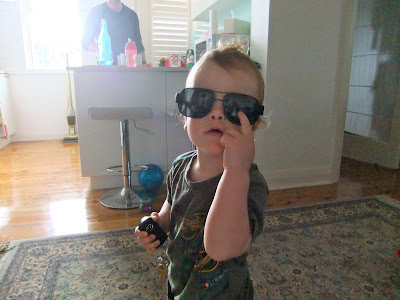 Babies and young things are everywhere at Gerolstein, too. But we have had our share of drama and disaster. Duchess’s stunning foal fractured a sesamoid at two weeks. He doesn’t seem to know it, though, for when he is let out for a few minutes from the pen where he and his mother are immobilised, he kicks his heels in the air! 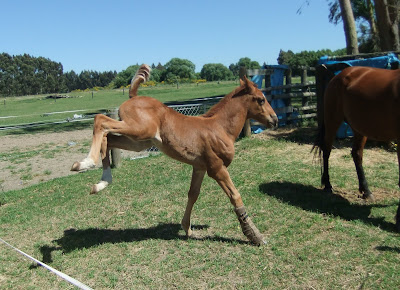 Yearling Thomas tried out for a showjumper and jumped a double oxer wire fence. Somehow he landed on the other side, but the trailing leg … So he’s a sad and sorry boy and on bute today. Lucie also jumped two fences, and broke through a lot of tape – what a girl will do when she’s in season, and there’s a man down the block! Straight back into training for her. And Agnes, and Pattie.

The foals continue to be a joy, but give us regular frights. Little Johnny, who is to be christened Johnny Molecule after my brother’s new book, is growing up nicely at a month old, but has been left with a curious stub of umbilical cord …! 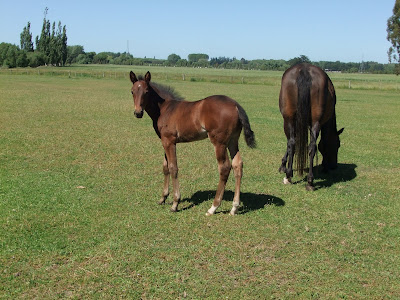 There is a lot of worry and incident in having horses, but when they win … well, last night was my ninth win of 2011. Something has gone right in this otherwise ill-starred year.

It was Seppl yet again. After his win at Kaikoura, he proceeded to the New Zealand Cup meeting. He ran an enormous race off 20 metres handicap on Cup Day (5th), and on Show Day got run down in the last bit for another 5th. He came home with a dirty nose, but it soon cleared up, and on he went to Geraldine. That is a race I prefer to forget. He was disqualified for allegedly interfering with a notoriously breakable horse … which meant his almost impeccable formline got a ‘0’ to it.
Perhaps that was why, against a large field of horses ,many of which he had already beaten, he went out, last night, tenth favourite at 26-1. Or was it perhaps partly because Murray elected to drive Pammy’s Boy, which had defeated Seppl twice this season. Seppl’s new driver – his fourth in 14 starts – was Jeremy Anderson, an enormously talented junior reinsman who I will always be pleased to have behind any horse of mine.
Seppl had drawn three – all but three of the front-markers were ’unruly’ and condemned to outside starting positions! – and, while a lot of the ‘unrulys’ showed just why they are classed ‘unruly’, Jeremy got him away from the barrier like an Exocet. Straight to his favourite place, in the lead.
But the driver of the favourite, Mamselle (I haven’t yet worked out why it was favourite, but someone knew something), had the same idea. Jeremy calmly let him past, and tucked our boy into the trail. A good decision. No one was game to take the favourite on, and she and Seppl came to the home straight in front. Seppl headed for the passing lane and my heart sunk. He has shown aversion to ‘passing on the inside’ before. But not this time! Jeremy kidded him through the gap and, as the two leaders drew clear of a field where nothing but Pammy’s Boy seemed to be coming forward, Seppl confidently took the lead and carried on to a comfortable ¾ length victory. 4 ½ lengths ahead of the third horse!
He had been given a perfect run, and responded perfectly, in his fastest winning time to date.
These were some of the best 2-4 win horses in the country. I’m beginning to wonder if our Sepp isn’t the best trotter I’ve owned and bred! So far. Watch this space. 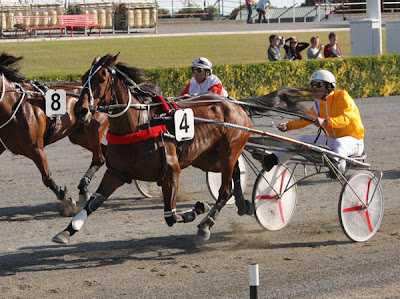 The other babies round here have been avian. While I was in Australia, Trixie hatched five adorable peachicks. But nature is cruel, and peahens are not very good mothers it seems. After two weeks three have gone -- lost, stolen or strayed -- and our baby count is now down to two. Temporarily, I should say, because now Dixie is sitting secretly on another bunch of eggs … as for Mr P he just crows, doesn’t help at all with the babies, fans his tail and looks for more available hens … 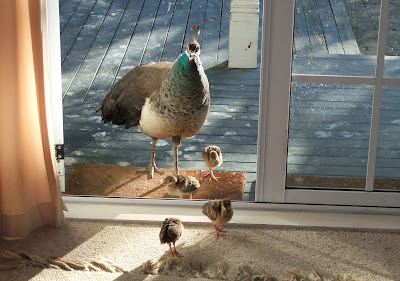 Now, can something nice please happen in the last four weeks of my annus pretty horribilis...
Posted by GEROLSTEIN at 4:44 PM 2 comments: