Thinking back: that very first win ...

Dreaming on about that fortieth win as a race-horse owner, got me thinking back to the very first of the 34 triumphs to date. I looked in my diary and there it was. June 1999. 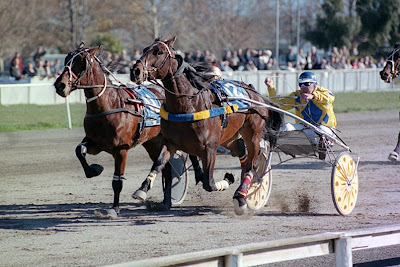 "It was six o’clock in the June morning, South of France time. The sun shattered in at the window and into my eyes, and I woke up knowing half-consciously that there was something I had to do. Of course, Davey Crockett. Marlborough Day Two. Check the web. He’d given us a splendidly close third (I didnt know till later just HOW close) on Day One. Could he have come somewhere again?
I slid out of bed and hurried on naked feet (OK the rest of me was just as naked, but the world was asleep and, if it wasn’t, it wasn’t at my place) over the big red terracotta tiles of the passage into the living room where the old computer with its new Internet installation sat, rather vulgarly, where once had throned a more elegantly traditional phone.
French phone service and, above all French Internet service, is not - to put it in sweet English - good. In fact, its usually either bottom-of-the-class slow or just plain stubborn-won’t-ish. But for some reason, today everything clicked through in the few moments it took me to fill and turn on the kettle...
Click. Hrnz.co.nz. Click Results. Click Marlborough HRC. Click .. the trot...
Have you ever read a book where the heroine (for reasons best not gone into) suddenly goes off like the luncheon whistle at the local factory? Yes, I’m afraid I did. It was nessun dorma at Les Arabanes that morning. They heard me three flats away. And they knew right away what must have happened.
Davey Crockett had won. We had won our first race as owners.
It took me a while, though, to find out more than the bare facts and figures. Mike Grainger posted me a copy of that best-seller (well, it ought to be) the Harness Racing Weekly in which half a page was devoted to Davey’s exploits, and in which - and I didn’t realise the hugeness of the honour at the time - he was nominated one of the three “Runs of the Week”, but it wasn’t till months later when I returned to New Zealand and bought the video of the race from the TAB that I realised how much he had deserved it. It was quite a run..
Our horse had won a race. Won a race. Won a race ...
Posted by GEROLSTEIN at 1:38 PM No comments:

and in with the new.

Will it be any different? What will it bring ..? Something nice – really nice -- would be most welcome ..

I wish … oh no, therein lies disaster! I know what I wish, but to write it down …

2010 will go down in my memory very largely for my time in Berlin, with its extravagant highs and occasional distressing lows, but most particularly because of the very dear bunch of new friends that I made there ..
As for Gerolstein, little changes here – well, we wouldn’t want it to – except that, during the winter, our Horse Hotel got vigorously under way and as of mid-January 2011, we have eleven ‘boarders’ occupying our paddocks, alongside our little group of racehorses. My international team of racehorses actually had a pretty fair year, and I notched up five wins – Elena one and Seppl two, in New Zealand, Tenor one in France, and Livia one in Australia. Since I now have Fritzl, D’Arcy, Lucie and, later, the rising Agnes to add to that quartet, on the racetracks of the new season, 2011 will hopefully be even more successful. Let’s hope, by this time next year, I’ll have broken through the barrier of 40 wins!

More unusually, we have had visitors. First Kazu from Japan, and now Lisa and Vera from Germany, with Kim from Germany to follow, have come to us through the Farm Helpers in New Zealand scheme. If the young people the scheme sends out seem to have negligible farm or horse experience, and – I suspect -- some of them a rather different idea of what ‘work’ means to that we have!, we have so far found our own particular ‘workers’ both nice people and willing helpers .. 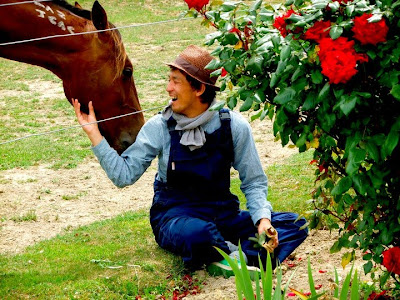 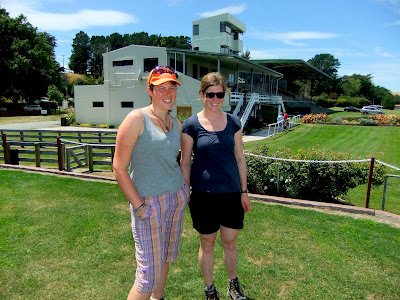 The special visit of the post-Christmas season, however, was that of my very, very old friend Denis and his partner, George. Denis and I go back more than half a century, to our very early college days as twelve year-olds, and throughout our years at college we were inseparable chums and … rivals! In all our studies and in music, throughout our school years at Nelson College, it was almost invariably Kurt and Dennis, first and second: in one order or the other! 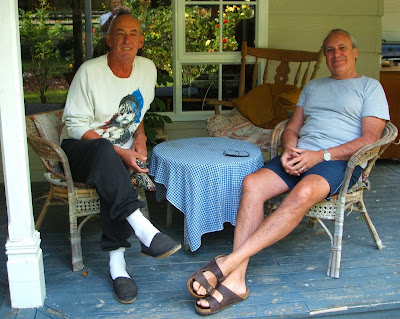 Of course, the old school magazines came out and memories were tested for veracity .. I was quite sure that I had never come top of the class (the scientists with their 100pc in maths etc always beat us, the humanities boys), but there it was in black and white. Fifth form .. first Kurt, second Denis ..
The first-year school photo came out too and we tried to put names to faces. I’m afraid we have forgotten almost all our schoolmates who did not excel – there’s Kember who became Captain of the All Blacks, there’s Keightley who was always going to be a brain surgeon or a rocket scientist, there are Harrison, Glasgow, Wadsworth, Wells, Oliver, Dickinson, Horrocks and ummmm .. I wonder where they are now?
I wonder if any of them made it to entries in Wikipedia and Grove and so forth, as Denis and I did, or whether the ‘humanities’ boys came out on top in the end! 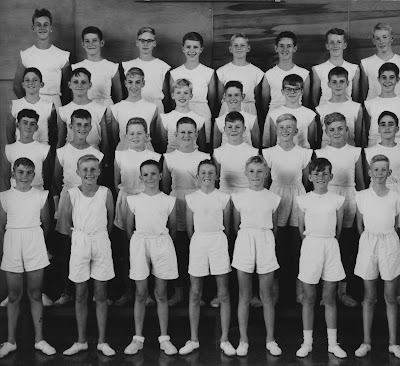 Oh, Denis, by the way (we are on the opposite ends of the second row in the photo), is these days Dr Denis A Smalley, international celebrity in the world of electronic music. We both ended up in music .. but in rather different areas!

On the horsey front, Seppl and Tenor, sadly are out of action with small injuries, but dear old Elena has been up there spitting fire .. two fine thirds and a fourth in her last five starts! At six years of age, she is running the best races of her life. Yesterday, we took her to the trials, and she steamed home for second behind a much more highly qualified horse, the grey Will Play. 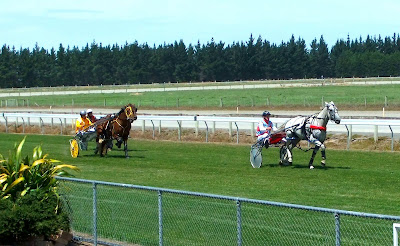 The previous evening, at 11.45pm NZ time (alas!) little Livia made her seasonal appearance in Melbourne ... up against three of Victoria’s top fillies! She couldn’t foot it with the first two, but she ran on stoutly for third place, and it is evident that she will give us lots of consistent grand fun this year. 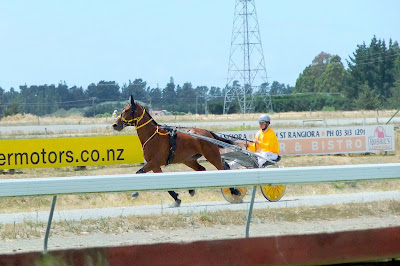 Our next bit of excitement may, however, come from Fritzl (above). Remember Fritzl – the other half of the ‘Little Boys’ double act with Seppl? Well, Fritzl raced the last two years for my friends Mike and Sue, but now, by a combination of circumstances and earthquakes, he has come home. I am now his owner, and Wendy his trainer, and he has just made his first appearances for us at the workouts. First time, he was second behind last year’s Breeder’s Crown juvenile champion, and yesterday he cruised round Motukarara Racecourse at the head of his field, and stayed there. And I was so chuffed, I forgot to click the camera!
So Fritzl will go to the real races this week, along with Elena ... and I, for the first time in years, will have three horses -- and D'Arcy makes four -- racing at once!
Fingers crossed… because all four of them are racing with a chance!
Posted by GEROLSTEIN at 6:58 PM No comments: