.
When a nice nineteenth-century carte de visite from a New Zealandish photographer comes under my eye, especially one bearing a name and a date, I can't help but investigate it ... 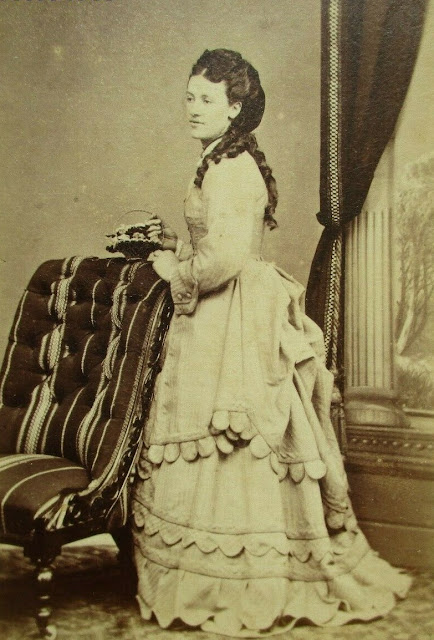 Agnes Elizabeth FRENCH apparently born in London in 1852. This photo is marked 1874, so she's 22 years old. Well, I have searched, but apart from a record in the Civil Registration lists, nothing. No baptism, no parents, no 1861 census ... did the family emigrate when Agnes was a child? Indeed, were there official 'parents'? Did she perhaps go to New Zealand on her own ...  Anyhow, there are a number of 'Miss Frenchs' around in Auckland in the 1860s, including one who sings, but the first notice of what is certainly she, is the announcement of her marriage. 22 July 1876 (not 1875), at the Auckland register office, Agnes married one James Amasa Bigelow.

Now the Bigelows of New Zealand and Australia are as full-throated with their family information as the Frenchs are shy. And there a huge numbers of them, and their descendants, around today, lots of whom have taken enthusiastically to geanealogy. Some, alas, with very little accuracy and success, others with much more. There is a whole website devoted to the Bigelows, with a part set aside the descendants of Amasa and Agnes (http://bigelowsociety.com/rod8/jam8c232.htm), and there folk including Robyn Futcher (who has some photos, alas not shared), Leonette Hathorn and Christine Morris have told tales of the family history which colour it up delightfully. Like all family hand-me-down traditions, they have got a little battered by forces of fiction (and copying dud 'truths') over the years ...

I'll start with our man's father. His name was John Bigelow, he came from Nova Scotia, and was apparently born there in 1803 (10 March). As a career, he practised the good Nova Scotian craft of carpentry. Building ships. He married a lady named Smith. Jane Smith so tis said. And their first son, John Smith Bigelow, was born in 1851. James Amasa was born in 1852. (Not in 1862 in Australia). Apparently, in 1853, Jane died. Well, if she did, whence came the rest of John's 'large family'? He must have remarried. Anna Margaret Jane (1853-), Emma Sophia 'second daughter' (1857-) , Mary Elizabeth (1858-4 February 1917) ...
In 1859, John decided to take his family .. the new wife was Mary (d 31 October 1883) ... to the Antipodes. We know that, because he applied for a settler's land grant in New Zealand. And on 27 November 1859 they set forth on the barque George Henderson from hometown Pugwash: John, John (jr), Mary, James A and Ann. But they are not alone! On the same sailing are George, Albert, Sarah J, Ann and Sarah Eaton. Sarah Eaton (née Bigelow, d New Plymouth 10 July 1879) was John's elder sister.  Oh, we know its them, because on the listing for one of his not infrequent incarcerations, Amasa said 'arrived on the George Henderson ...'. There does seem to be a spouse or so missing ...

The Bigelows did splendidly in their new home. John quickly became foreman carpenter for an important boat-building outfit, soon branched out into building on his own account, and his name was attached to some of the stoutest sea-going vessels and the fastest racing yachts in Auckland and, indeed, New Zealand. Son John followed behind as his father's no2. Father and son were active in the community too. They were the leading lights of the Ponsonby Grange Road Baptist Chapel, John jr even becoming the Superintendant of the Sunday School, they were ardent temperance advocates and fluent speakers and lecturers for the Band of Hope Union, and they succeeded in running shipyards for thirty years with little labour troubles in an industry noted, even then, for its suicidal volatility. Mrs Bigelow, and Mrs Bigelow jr (Mary Ann Brown), plus the three Misses Bigelow, were all active in chapel affairs, concerts (Emma was a whiz on the harmonium), dinners, teaparties, and two of the girls found good, sound husbands there. Emma ('second daughter of Mr John Bigelow of Ponsonby') became Mr Charles Abbott in 1887, and in 1885, Mary ('youngest daughter') wed Mr James Edgar of Dunedin. I think I see her delivering a son 23 April 1889. And then there was Amasa. The flop of the family. The mouldy gooseberry.

When John jr, Emma and Mary married, the usual kind of notices appeared in the press: 'son/daughter of ..'. When James married, the fact was baldly recorded: no family names for him or for Agnes. He had apparently gone mouldy already. He soon got out of Auckland and headed for Newcastle, where he set himself up briefly as a builder, went bankrupt, went jail for crime untold, and did the one thing that he would ever be good at: fathered the first of his nine children. When things got too complex in Australia, he disappeared back to New Zealand, where he was soon in court again for debt, and so, with two more children added to the stock, backed on his tracks. In 1886, he was up for fraud in Australia, in 1887 he tried to launch a patent 'beer-engine', in 1891 he was making and advertising 'Dingo annihilator bait' and there were other like fruitless essays, one apparently to do with white lead. In and out of court, of jail, of the Police Gazette ... in 1894 he ('mechanical engineer, 5ft 7ins, stout, long dark beard') was up for a breach of the Education Act. I imagine he hadn't been sending his children to school.

Posted by GEROLSTEIN at 6:10 PM