.
Eighteen months or so ago, a beautiful peacock made Gerolstein his home. As we watched him parading his glorious tail, up and down on the patio outside our windows, we realised suddenly that the spectacle wasn't for our benefit...

And so, for the last year we've been trying to acquire -- somehow, anyhow ... a female to share his life. So many efforts, so many dead ends ...

They have to be caged and fed for a week or two, while they settle in. Caged? Where?
We set to, to turn the littlest horse pen into a bird-proof sanctuary in the fading light and double quick time. Every bit of chicken wire on the place, my Dad's old tarpaulin, the wire shelves from the dead frig, a couple of old gates and a mouldy trellis, an old wheel, miles of binder-twine which had once held hay, a branch for a perch ... a veritable artistic collage! 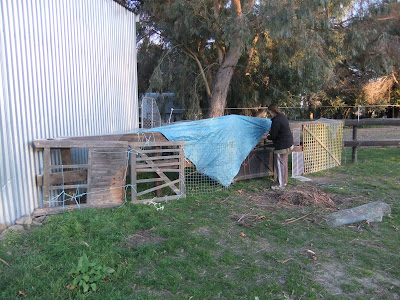 They arrived after nightfall, and Wendy and Jen showed them into their new home under the floodlights. Perfect! Well, not quite. During breakfast, next morning, we saw a lithe form scurrying across the paddock..

And then there were two. 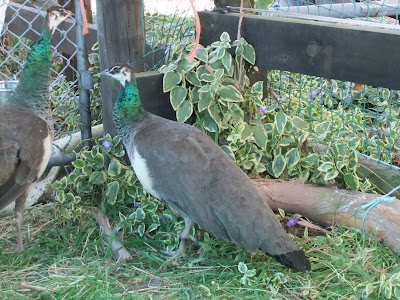 Refortification done, and now the two Misses Peacock are settling in for their second night in Pasticcio Palace. Mr P is munching his kitty-biscuits on the verandah ... the escapee obviously didn't find him, and he hasn't found the hopeful virgins. I don't think so, anyway. But he looks very sprightly and proud tonight. Maybe he knows!

Posted by GEROLSTEIN at 10:32 PM No comments:

The city that was Christchurch

.
Brother John popped in from England, and brought mother down from Nelson for a couple of days to Gerolstein... While he was here, he drove to the city that was Christchurch ... 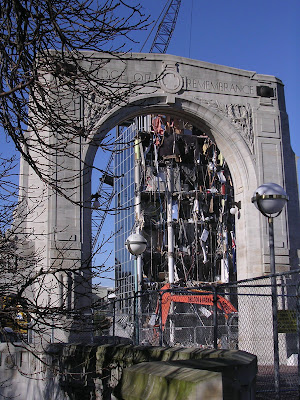 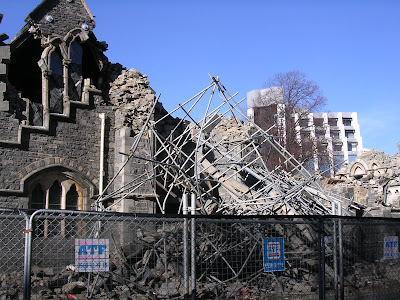 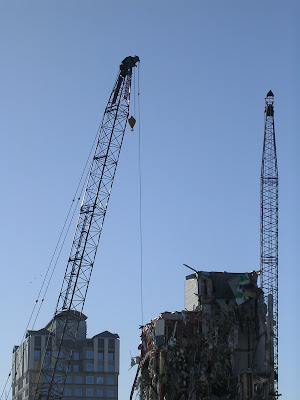 Posted by GEROLSTEIN at 9:49 PM No comments:

Little Livia Degerolstein and her battle with the stars

.
I don't play sweepstakes. I've always felt they were a distasteful hangover from the 'rich man's sport' state of mind of nineteenth-century racing. So none of my horses, over the last decade, have been paid up for, or run in Sires Series, Sales Series, Breeders Crown Championships etc.
So I don't quite know how it happened that I ended up paying the entrance fees to the Australasian Breeders Crown for Livia. I think, the day that the young man from Harness Racing Victoria contacted me, I must have just had a win and was feeling positive about racing. So, I rang trainer Graeme and said 'should I pay?', and he said 'yes, she deserves a shot', so I did.
When I looked at the ranking for the acceptors, Aussie Made Lombo, Australia's 'Filly of the Year' 2010, was rated number one. Of course. And Livia was 300th, and counting. Oh, dear.
Since then, of course, Livia has developed into a nice wee racehorse. She had won five races, and had climbed up the rankings into the 100s by July this year. And, well, she was paid up, eligible, so it seemed silly not to run her in the Championship, in spite of the presence of Aussie Made Lombo, Bella's Delight, Lively Moth and Kiwis Tatijana Bromac and Victor's Delight in the field. You never know, we might draw a soft heat and get a race run to suit us and ...
When the fields came out, Livia was number one in the first heat. And, guess what, number two was Aussie Made Lombo. Oh, well.
The big day came, and Aussie Made Lombo was 1/10 on favourite. The pundits and men who talk couldn't see her beaten, although one or two did give a mention to Tatijana Bromac, at 7/1, a filly who had run some fine races in New Zealand. Livia was actually third favourite, at a distant 15/1, mostly I think because she'd drawn one, which -- given her slow starts - isn't always favourable to her.
Watching on the late-night TV at Gerolstein, fortified by a little bubbly and nervously hoping she'd run up to her third favouritism, we watched endless pictures of Aussie Made Lombo (Livia was next her, so sneaked on to the screen momentarily) and listened to lengthy chat about Tatijana, whom the commentator called 'Tijuana' before his courage failed him totally at Livia's name and he just called her 'number one'.

The start of the race went as predicted. Aussie Made Lombo cruised straight past Livia and into the lead, and having got there, slowed the pace. Livia had no trouble in gluing herself on to her back wheel, into the favoured trailing position. We just had to hope that Aussie Made Lombo would stay in front.
And she did. That's what a reputation does. No matter the first half mile was run really slowly, no-one was game to take the favourite on. Until the half mile. Then everything changed. Tatijana Bromac launched a mighty challenge and the speed up front increased dramatically. The duelling leaders were four lengths ahead of the field approaching the turn. And Livia? While the rest gasped for breath behind, she paced steadily on, a clear third. Oh, just stay there!
Round the bend, the titanic battle continued, and good heavens! Whips were flying, but Gavin Lang was just gently encouraging Livia and she was making ground on the two in front. Then the little head with the red nose roll was up to their backsides and the commentator alarmedy started calling her 'sneaking up on the inside' and 'coming fast'. Sneaking? She was doing a Livia finish. But for once, not way out in the middle of the track: up the sprint lane.
Suddenly it hit us, she was going to win! And win she did. The official margin says a neck, but she didn't have to win by any more, and Gavin had stopped driving her before the post.
Joy, rapturous joy, at Gerolstein. And the first person to call us was Bob McArdle of the Tatijana Bromac team. Don't tell me there isn't some 'sport' left in the racing industry!
Livia's win caused mild consternation in the press, who talked about the speed duel, the trail run, the sprint lane ... what they didn't talk about was that, in a last half run in 56.8 seconds, Livia had closed down a 4-length gap on the stars...
So, there we are. She is an ABC heat winner. In a funny system, the beaten horses run this week in a repechage, so Aussie Made Lombo and Tatijana Bromac, Bella's Delight and Lively Moth -- all beaten -- will obviously get back into the competition for the semi-finals on 12 August. When ... anything can happen.
It would be nice to be in the final, but it's not hugely important. No-one can take away that wonderful night from us. The 56.8 half, and the victory over the champ.
Bravo, Graeme, bravo Gavin, and -- oh! -- bravo little Livia Degerolstein.
Posted by GEROLSTEIN at 5:59 PM No comments: