Europe doesn't want me ... but perhaps the EU has done me a favour!

.
I’ve been a resident of Yamba, New South Wales, for a week and a half now, and it’s starting, I think, to get a lot of stuff stirring in my head. Just starting. But stirring.

I keep thinking of all my elderly Victorian vocalists who retired (usually widow(er)ed) to Brighton or Margate or even Roquebrune or Eze-sur-mer … you know, Separate Tables country or the South of France with dwindling revenues. I thought that must have been such a comedown for them. But I understand a bit now …

Well, I’m getting on for elderly, I’ve tried the going-downhill South of France, and Brighton and Margate are dole-bludgers paradises nowadays … 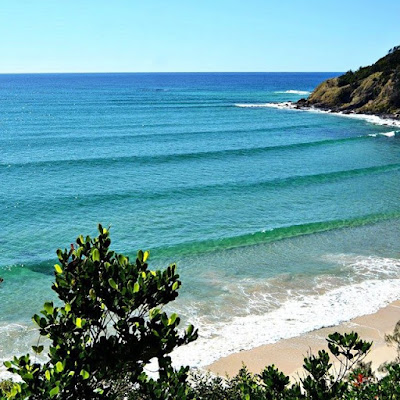 I’ve kept zooming about until nearly my 70th birthday. But the European Union in its wisdom now excludes me, each year, after 90 days … I, who was born of an Austrian father and have lived most of my life in England, Monaco and France … I, who have (infirmity oblige) paid $10,000 to get there … but who, criminally, still have a passport from the land of my birth. New Zealand. So no more 'Grand Tours' and I’m looking around for another wintering spot in which to spend at least some of the XXX thousand euros until now devoted anually to Europe. I just may have found it. 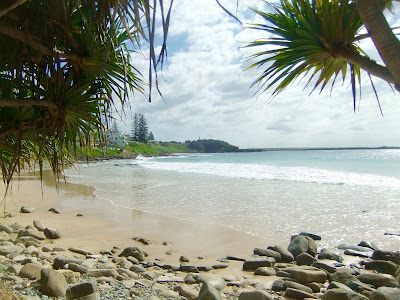 Here we go! A parade of pictures. It’s quite a change from my beloved Katz Orange and Asman… but I’m feasting …

Night out with my pal, Superharry. Yep, Superharry. He (again) scored the winning goal that put the local team into the area footy semi-final. Before heading back to Grafton to play … hockey. We got some nice eating in, just a wee lobster, with good beverage, in between … 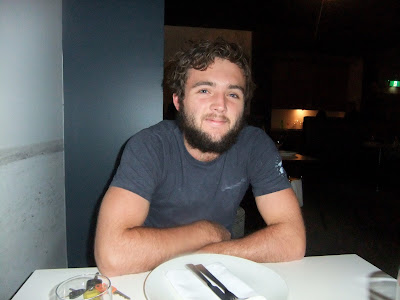 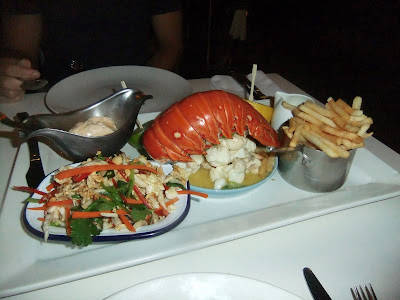 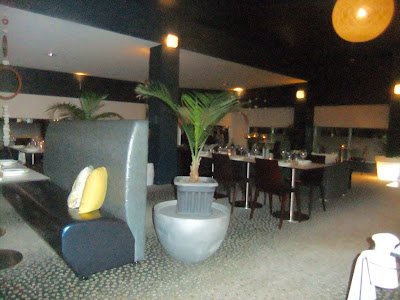 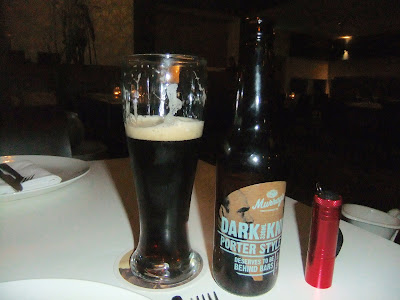 And that evening little Foxy Dame (from Gerolstein) was running in Perth. I knew she’d come second. So we punted on her for a place  (the Boardroom and Bar has a TAB!) .., and yay, second!

Tom’s Chinese is a steep 100m up from Joe and Renée’s flat (that’s where I’m staying) so I checked in. And checked again in the next night and repeated the meal! 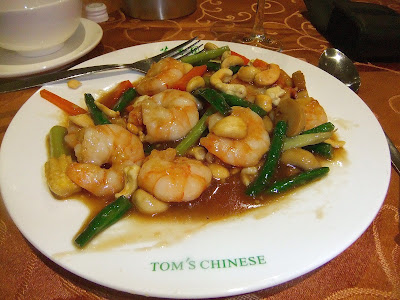 The star place for lunch (no, I don’t cook) is the Beachwood Café. With a Turkish flavour.  But this is New South Wales, so …of course … crab, prawns, squid, octopus …  but also peppered chicken livers, kofte, superior pasta … and a hostess who listens to your likes and dislikes, and even peels the tomatoes for your lunch when your false teeth can’t take the skins. 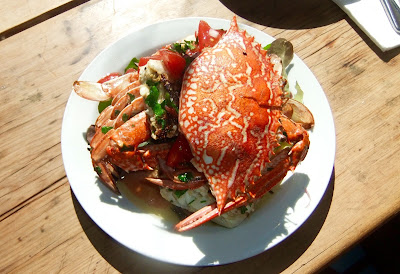 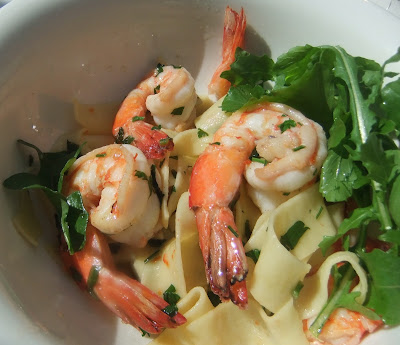 Well, for an (almost) 'elderly handicapped gentleman' who loves good food … and there's more where that comes from!

So tonight I’m sitting here tonight with nearly a kilo (!) of fresh prawns, brown bread from the baker, Redlands Emily bubbly, a lump of plain cheddar … as dusk falls over the winter landscape .. 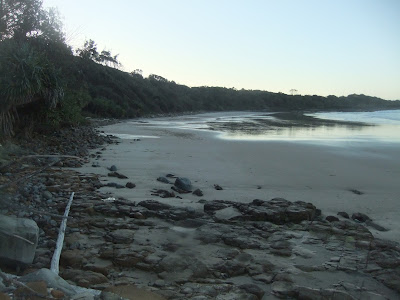 Posted by GEROLSTEIN at 5:40 PM No comments:

Yamba: A walk on the breakwater …

.
A fine winter’s midday in Yamba. Sky blue. Sun shining. Little cool breeze to remind you that (hurrah!) this isn’t summer …  Just right for a stroll out from Turner’s Bay, along the breakwater … 1.2km from end to end, it says. Piece of gateau. 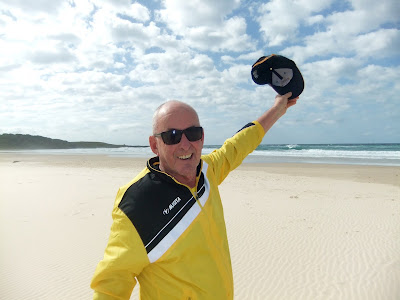 Perhaps just a light lunch first? We seem to have eaten interminably the last few days in this town of infallible (so far) food. Too nice to eat inside. Let’s do the old-fashioned thing: fish’n’chips by the seaside!  There’s a table by the breakwater where the Hankinson family have lunched for many years, so … into Wato’s very superior chippy (pick your own fresh fillet and watch it cooked), and then off to ‘our’ table … yes, I’m an Hon Member of the family now! 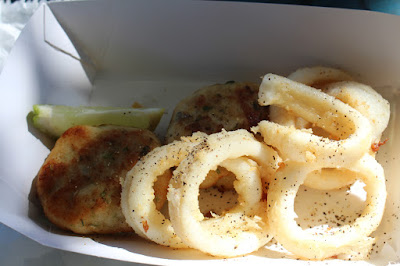 My calamari and fishcakes grand … Paul’s schnapper and fries ditto … and now! Exercise.

It’s a splendid piece of construction, this breakwater. I didn’t need my stick, rarely an arm, there are no underfoot traps … a fine, flat walkway, for all ages. Nice! We strolled to the end, peering into the blue yonder in the hopes of spotting a whale or some dolphins … I’ve seen hundreds of them in my at-sea days, but you always want to see more. No luck. But as we headed back, things came to life. A skydiving shag hit the sea in search of his lunch. We watched to see him surface. But he didn’t. How long can a shag apnée?
I went to look and found a wondrous cache of wildlife. First, a shag that wanted to audition for us … La Loie Fuller in action! 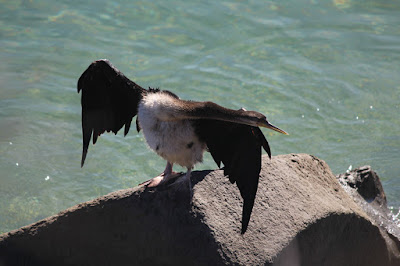 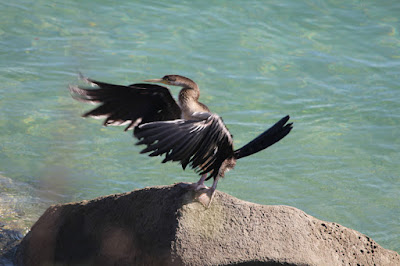 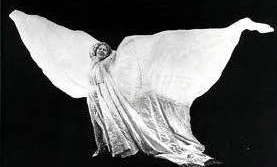 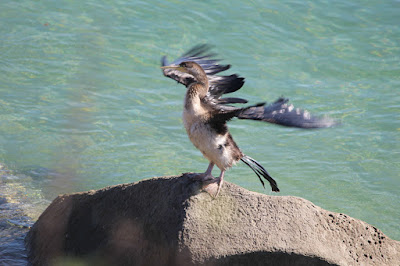 Then his cool, calm and grandiose grey brother. Next a shoal of fish. 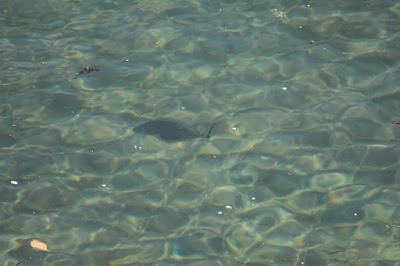 And then a dragon. Yes it was. A baby dragon … 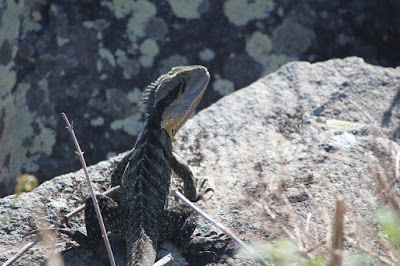 And the seabirds flew, and the wattle smiled … 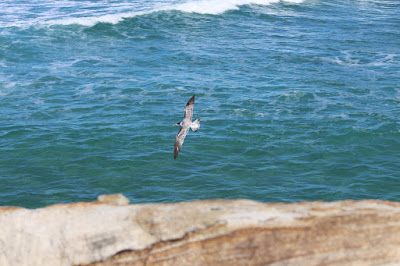 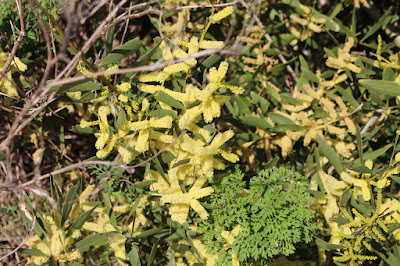 And my ruddy camera battery had run out. So all these lovely pix were taken by tah-dah! 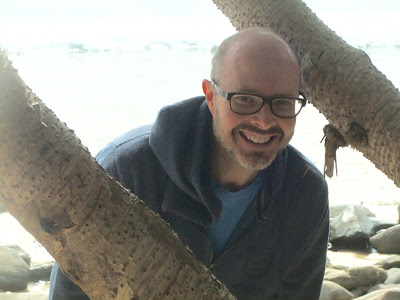 Posted by GEROLSTEIN at 9:38 PM No comments:

.
We continue our tour of the restaurants of Yamba. We’ve run out of personal recommendations now, so I’m scouting the Internet and, in particular, Trip Advisor, for clues. Yes, I know Trip Advisor is manipulable (I’ve seen it done) and I know they mix up caffs with class restaurants and ice-cream parlours, and every darned place in town boasts their ‘certificate of excellence’ (!) … but I’ve been a professional reviewer and critic of one thing and another for enough decades to see through most shams (and they’re usually pretty transparent), so I don’t shrink. So. Yamba. 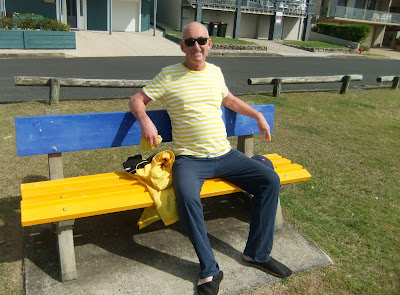 Boardroom and Bar. Well, I’d rather have a restaurant than an office. And the reviews speak of children’s activities … good prices … and other dubious items … this doesn’t sound very ‘me’. But, damme, let’s try. 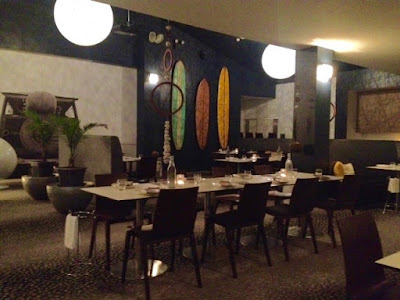 Well, the Boardroom – which has a nice bar, not a pub one – has been rather too cutely named. The ‘board’ in question is, this being surfing country, a surfboard. OK. Big joke. Not a selling point.
We arrived at dusk, so I didn’t see my surroundings too clearly, but I saw a pub, a gaming room, a TAB, a children’s playground … this no 1 resto is part of a … complex? Yes, it appears it is an offshoot of the Yamba Shores Tavern. Which seems to have quite a few offshoots!

Then we went in. Another world. Spacious, modern, extremely attractively designed … the tables spaced at the most excellent distance from each other, you feel you’re en tête à tête … this is NICE. This calls for a glass of bubbly. My bubbly, served by a sweetly shy young looker, is called Emily. Well, that’s ME won over!

Menu. I was told tapas. Hurrah! Here they’re called ‘Small Plates’. I like this place already. A bouchée is a bouchée in any language. If you want something more substantial there are ‘Share Boards’. ‘Ideal for two’. $34-60. No. We came for our favourite ‘everything in the middle of the table and … go!’ type meal. You pick one, I pick one.

Asian vegetable dumpling with ginger and shallots. Oh yes. Tick that one. I want the Sea Scallop with Thai green apple salad. Paul fancies the Cauliflower popcorn with roast garlic aioli. Empanada ... what the heck does that mean? Oh, tick it anyway … oysters? Naah. I’ve eaten claires fines in Nice … anyway, there is plenty of interesting choice, all described without any stupid adjectives … yes, I like this place already.

The food came just briskly enough to be freshly cooked, and the little parade of goodies went on … and on …
I’m not going to attempt to describe them individually. I made an error in the eating. I had my Empanada, with its chili sauce, first. And the chili stayed with me into the later dishes. Wrong. I’ll do it differently next time. Oh yes, there will be a next time, if somebody will drive me! 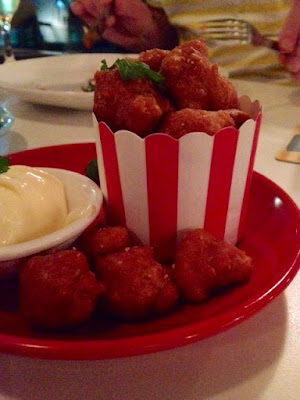 Paul picked the winner. We had seconds of the Cauliflower popcorn. So simple, but so well done. It’s the one I remember on the morrow. That’s good cooking. I had thirds of ‘Emily’ and then – believe it or not – we ordered dessert! Paul had Peanut Butter Parfait with salted caramel (great touch!) and ganache. Ganache is one of those Masterchef words that I don’t understand, but anyway it was most tasty. I had a ‘Helado de Vainilla’ (hey! What happened to the Australian labelling) which was vanilla ice-cream with a glass of Spanish sherry. Most enjoyable, but the sherry – of which I’m a dilettante – was of the port wine variety, and I’m an exxxxxxtra-dry man. 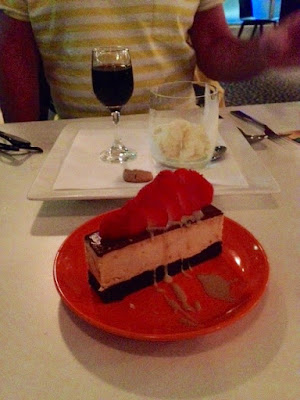 A very nice meal, very nicely served, in a relaxing and elegant atmosphere … what can one ask for more? I think B&B probably deserves its No 1 Yamba-rating, certainly as a dinner venue. But I still have a few to try … now, tonight, I’m heading for no 6.

Episode the next. Well, we walked up the hill to number 6. Italian. Osteria Martini. Closed. For three weeks. At a period when other restaurants are bulging? Perhaps they’re very prosperous. Oh well, no Italian. Down the hill again, past no 7 (Helen says ‘no’). OK, here’s no 25. The Mexican. Good name. Tells you exactly what to expect. It’s thronged. Young folk, families … ‘no split bills’ advertisement. Ha! … well, I’m hungry, so … here we go. You can only die once.

A sprightly Margarita takes the edge off my doubts as we scan the menu. Oh! The big menu is the drinks one … I may be all right after all. I am not an experienced Mex-eater. I’ve only been to Acapulco once, 2/3 of a life ago, and I have no idea whether what is served up to the outside world is kosher Mexican food or not. 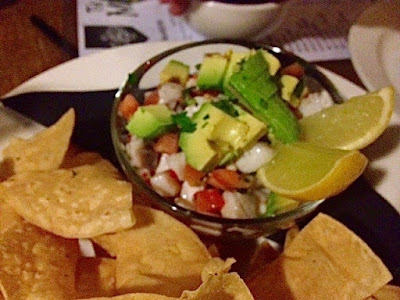 However, I quickly spotted the word ‘ceviche’. May last ceviche (which the Katz Orange chef had confided was really a fish tartare) was the joy of my this summer’s Berlin eating, so that was for me. This one was fresh, light, tasty and ideal for a summery night. Especially with a second margarita. The tortilla chips on the side aren’t really my thing, but who cared. The ceviche was splendid. Paul had a chorizo and onion quesillada (thumbs up) and we ate our meals with some nice black beans and excellent pinto beans … 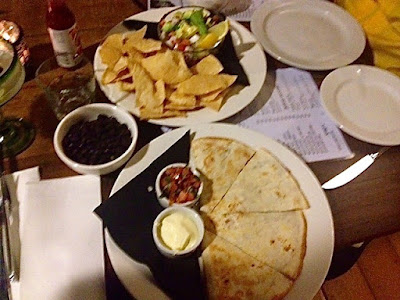 Price: $102.00 for two, including 4 margaritas (3 were mine). And nearly the last thing we saw was a large table of diners asking for … a split bill. 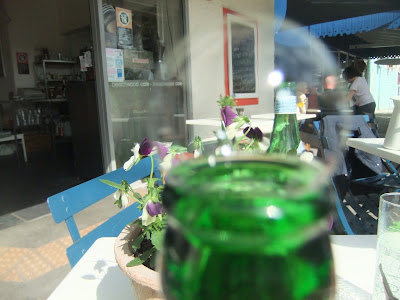 I’m coming back to sunshine and food of Yamba in a few days, to stay awhile. So I’ll visit my favourite eateries again, and maybe try one or two more. But I have to admit I’ve been to one thrice already. Not for dinner, the Beachwood Café doesn’t do dinner. Breakfast, brunch, lunch, coffees ... I’m just back from a brunch of zucchini and corn fritters … light as a fairy’s frock and ten times as tasty. And a salad. The restaurateuse remembered my aversion to tomato-skins, and without my asking, served me up … skinned tomatoes. Where do you get service like that? 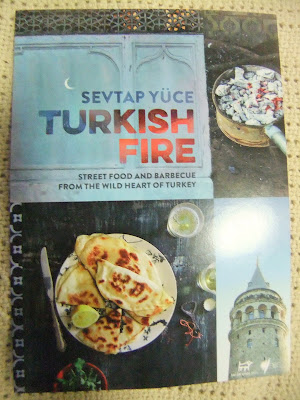 As for the Trip Advisor ratings, they are reasonably fair, as far as I have tested. Beachwood and Boardroom have that extra ‘je sais exactement quoi’, but there’s plenty of enjoyable food here at Yamba, the margins between 5th and 25th are very slight … and I’m happy to say I haven’t had a duff meal, coffee, snack, anything, in five days.

Posted by GEROLSTEIN at 8:17 PM No comments: