The fisherman-poet of Gorleston, Suffolk

.
Some time around 1890, a young fisherman from Suffolk paid out his hard earned pennies to the London Stereoscopic Company for the printing of this advertising card 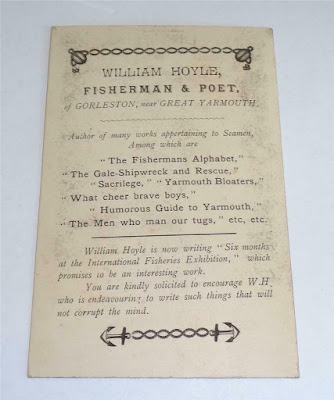 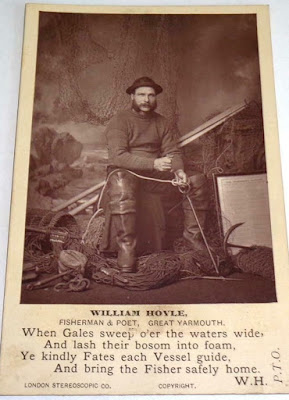 The fisherman poet? another John Clare? Or another William McGonagle? Or ... so, while the chimney-sweep was occupying my living room, I thought I'd have a wee peep back to the 1880s and 1890s to see what the world had to say about Mr Hoyle and his rhymes. And I found ... nothing.

But I persisted a little, and finally the 1871 census rendered up a young William [Thomas] Hoile (b 1862), living in Gorleston with his mother Maria (née Betts) and his younger brothers and sisters. Father is not at home, because father is a fisherman. 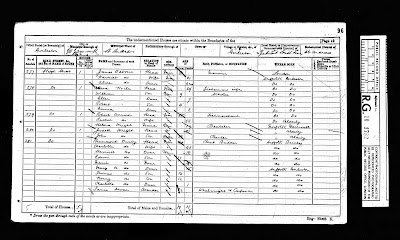 By 1881, father has given up the sea and become a 'licensed hawker', and it is now the younger generation who have become the fishermen. And, at some stage, the eldest son began writing verse. I am certain that if one had access to the local papers of the period, they would hold some lines bearing the name of Hoile or, as he preferred latterly, Hoyle, but I have not succeeded yet in finding any. All I have found is a reference to his 'Fishermen's Alphabet' and weather verses in the Suffolk Archives, and a few mentions, in the early 1900s, of the Alphabet being recited by local gents at the penny readings and amateur concerts of Lowestoft and environs.

William wasn't around to hear them. Our last sighting of him is in the 1891 census. 23 High Street, Gorleston, houses mother and three siblings: William is at 53 Charlotte Street, lodging alongside Charles Cox, 55, wheelwright in the home of the widow Goreham, shopkeeper. He's still a fisherman. And doubtless a poet.

I don't know what happened. Only a death certificate would tell us for sure. But in August 1892 the fisherman-poet died at the Walrond Smack-boys Home, South Dene Road, at the age of 31.

The lyre is stilled ... but his advertising card lives on ...


PS The fate of the poet is detailed in the Norfolk News of 3 September 1892. Alas, the British Library will only allow you to read it if you pay ... sad ... ah! the cost of knowledge in England ..

And twenty minutes later there arrives from ....  Ireland ...

And here it is. His masterpiece. My brother cycled down to Lowestoft, and, from the archives there, transcribed The Fishermen’s Alphabet

‘A’ Stands for Anchor, the Fisherman’s hope.

It’s a very good thing with a strong chain or rope,

To ride out the storm, or keep time with the tide,

In a beautiful craft he watches with pride.


‘B’ Stands for Binnacle, close to his hands,

When steering his craft away from the land,

To the grounds which he knows are all covered with fish

That get him a living, and makes some people rich.


‘C’ Stands for Captain, the Crew at their work,

But woe to the lad who his duty would shirk,

For the Skipper is blunt, and would think it no sin,

To give him the sack without any tin.


'D’ Stands for Darkness, through which he must go,

On cold winter nights in wind, frost or snow,

When dangers are rife that fill landsmen with dread,

Even when you are snug, in a warm cosy bed.


'E’ Stands for Eke out the bread, beef and tea,

Waste not is our motto when sailing at sea ;

For when you are hundreds of miles from the shore,

It is hard to replenish that impoverished store.


‘F’ Stands for Fish, a most cheering sight,

Let them be caught by day or by night ;

And to those who take them with net or with line,

God bless their toil, and send them plenty of prime.


‘G’ Stands for Gaff attached to the sail,

To hold it out smart in calm or in gale,

When up with the peak to keep her a luff,

To steer a smack well you must not be a muff.


‘H’ Stands for Hatchway that leads to the hold,

Where they keep water, tackle and coal ;

Ballast to make her stand up to the breeze,

To carry her safe over gigantic seas.

‘I’ Stands for Ice, a most useful thing,

It enables the fisher his cargo to bring

Full many a league from his dear native home,

They christened him John, but that was too tame ;

He spent his good money quite free on the shore,

Then to sea he will go and try to earn more.


'K’ Stands for Initial of Keel made so strong,

It streches from stem to sternpost along ;

By the rights of the law your ship to keep sound,

She never should touch on any hard ground.


‘L’ Stands for Lamps, with red and green glass,

To prevent sad collisions when vessels should pass ;

So keep them well trimmed, and make them burn bright,

Your shipmates will sleep all the safer at night.

He’s as pleased with it’s rays as a child with a toy ;

For it lightens his path, and makes the fish sport,

And gladdens his heart when to market they’re brought.


‘N’ Stands for North on the compass card round,

If you lift it up, beneath will be found

A needle of steel, which does duty so well ;

Always points to the pole, and acts like a spell.

If you buy natives you vouch they are sweet,

They’re a dish for the King, and they nourish the brain,

So if you just study, just try them again.


‘P’ Stands for Port, when sailing at sea,

Whether close hauled, or with the wind free,

It’s the rule of the road, and an excellent plan,

To use the Port helm whenever you can.


‘Q’ Stands for Quicksand, a most dangerous place,

That gets lots of Captains in shocking disgrace ;

Look out for the lightship, cast off the lead,

This hint, it may save you from sorrow and dread.


‘R’ Stands for Rigging, that holds up the mast,

When carrying sail before the rude blast,

So give her the sheet, T’is a lowering sky,

To see bonnie Kate tonight we will try.

They can point to Orion or Saturn, or say,


‘T’ Stands for Tackle, get ready about,

Hard down with the helm the Skipper will shout,

Ease off the jib sheet, your bowlines stand by,

There goes the bold Admiral, to catch him we’ll try.

‘U’ Stands for Union Jack, if you please,

A Flag that we love to see float on the breeze,

It’s a Fisherman’s hope where’er he may roam,

It reminds him of kindred and loved ones at home.

‘Tis a guide to the eye, and the pride of the heart,

To hoist up gay colours, of every hue,


‘W’ Stands for Windlass, the crew as they ply,

To heave in the cable, the bobstay and guy,

With hands that are light, and arms that are strong.

That every seaman should learn how to swim,

Then if by misfortune you fall in the sea,

What an Excellent thing this Letter may be.


‘Y’ Stands for Yarn that an old tar can spin,

To his shipmates below before they turn in,

Of adventures at sea, or freaks on the shore,

That would cause you to wonder, or laugh till you roar.


‘Z’ Stands for Zero, in Winter so cold,

This Letter reminds you my tale is now told,

So cheer up Fisherman friends on the main,

God guide us to sea, bring us safe home again.
Posted by GEROLSTEIN at 7:43 PM

How interesting. I lived in Oulton Broad in Lowestoft for two years until recently and regularly visited Gorleston. I was unaware of this story.