My two months in New Zealand are over.
The dear old Tikiebank (which, from reports to hand, seems to have become a little less ‘dear’ without me!) seems more than two months in the past, but otherwise .. how fast the weeks have zipped by!
And now, it’s on to Australia!
Yesterday my dear friend Sarah came round, and washed and ironed and packed my little suitcase .. the same one she packed for me with such utterly perfect results for the first four-month leg of my ‘world tour’ .. and in 24 hours I shall be in the air heading for Sydney. As, apparently, will be a variegated bunch of APEC-torial politicians. I hope they aren’t going to foul up the travel systems with their vanities.

So its goodbye to Gerolstein for the nonce. To Wanda and Elena (who finished her spell of work this week, and is heading for rest and restaurant on the soon forthcoming spring grass), to Minnie the kitten .. OK, Minnie, ‘cat’ then .. 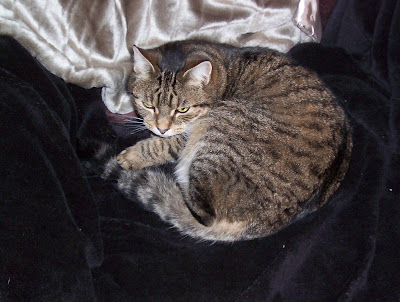 In fact, Wanda and Elena are my only home horses right now. Seppl and Fritzl have been leased for racing and have gone to Murray Edmonds, to be trained for their new ‘owners’. And yesterday morning that big blue and yellow Interisland Horse Transport vehicle, the advent of which always spells ‘all change!’, arrived at 9 am to take Gwen and Duchess off to Prebbleton for their date with the Great French Inseminator. Since the two ladies hadn’t been out of the back paddock in a good while, they were ready for a good brush up and pedicure .. do you realise how many knots a horse can get in its mane, how fast its hoofs grow? Anyway, mother and daughter were looking as good their shaggy winter coats will allow as they went off with, I suspect, varying attitudes. 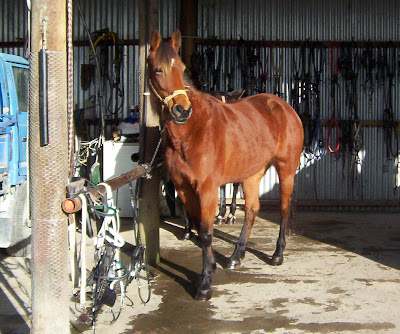 “Not another blasted baby! Huh. Female humans get hunks like this one here, what do I get. A straw. A flaming straw…” 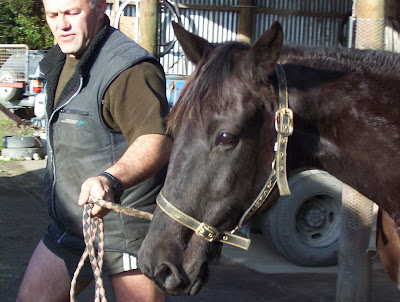 When they and I come back, we shall be having a visit from Jack Dowie. Jack is now an official part of the Gerolstein establishment, for he and I will be sharing the ownership of those two ‘French’ babes that will – we hope – be born to Gwen and Duchess in the spring of 2008.

But all that is a long way ahead. For now, it’s Ahoy! Australia!
Posted by GEROLSTEIN at 3:05 PM 1 comment:

A whole month and no blog.

It’s not that I’ve been doing nothing. Far from it. But I’ve not been doing a lot you’ld want to hear about.
Mostly, I’ve been freezing. I must remember never to come to New Zealand in July again. At my age, it’s just asking to be turned into a snowperson, starting at the fingers, the toes and in the small of the back, and going on from there. I have be forced to finally succumb, after 61 years, to an electric blanket.
Then there’s been the farm. When I arrived home, Wendy had it immaculate. But, since I’m only going to be here a wee while, I then had to launch on a whole year’s worth of jobs. End of immaculate. The trees, first. Ugh. Then the 800 metres of drive to be graded and resurfaced. Then some vast new drains. Each job meant machinery, and who says machinery says mess. Mud. And money. I’m not sure which I like least.
Still, it’s all done .. just the fertiliser on the hay paddocks to go and that, surely, can’t be too messy. Though of course it will be money, And the day after it’s done – and Gwen and Duchess have been safely packed off to stud at West Melton to meet their tube of expensive, imported French semen – I am getting on a plane for sunny (it had better be!) Australia. I’ll come here again when it’s unfrozen.

And then, of course, there are the horses.
Wanda, alas, couldn’t cope with the step up from the workouts to the trials. She has speed, splendid courage and (a mostly good, if sometimes impatient) attitude, but not as yet sufficient of the simple bodily strength to cope with being a racehorse. So she has been sent for another big holiday, and we shall try her again this time next year, after six months of heavy feeding, exercise and musculation, physical and mental.
My other potential racehorse, the lovely Elena, the (very) big filly I bought from the NZ yearling sales last year, has been brought on slowly. She, too, needs strength, but for the opposite reason to Wanda. Wanda is tiny, Elena (a year younger) is huge. However, even if her giraffe-y frame also could do with some filling out, she has come back from her latest long holiday with her ideas altogether matured and has done well enough round our home training track to be moved on to the next stage. Today, she went for the first time to the beach.
Now, going to the beach is, for a horse, not just grab-your-bucket-and-spade time. Hurdle one: horse who has never (or hardly ever) been on a horse float has to be persuaded to climb in. And take a 15mins journey in confined spaces. Hurdle two: horse, who hasn’t since babytime been off the property, has to cope with seeing the Real World. People, cars, scenery, other horses with carts on, dogs, roads, mastodons and pterodactyls etc etc. Hurdle three: to get to the beach, horse (with cart on and driver in) has to walk through half a mile of pine-forested dunes with bogies round every corner and many an unfamiliar hill and vale ... to reach finally hurdle four: the sea. What is THAT?! Hurdle five: horse who has never paced on anything but the home grit track meets … sand! Is required to go straight lines for the first time instead of oval ones! Past screaming kelp and snarling driftwood and … and after all that the poor thing is expected to pace beautifully for a mile and a half back down the strand.
It’s a lot for one young woman to cope with, all on the same day.
Well. Hurdle one was a tricky one. Elena is very tall. She walked up onto the ramp to the float, arrived with her forehead around roof level and flatly refused to go further. Wendy put an undercheck on her to keep her head down. I pushed. Wendy pulled. Sarah arrived to pick up feet and place them ever a little higher up the ramp. And twenty minutes later ... she was on. Off we went … a whole fifty metres. For up our drive was approaching a huge articulated lorry, coming to take away the drain digger. Wendy had to back the float up. And then the truck driver found he couldn’t get round our corner: so HE had to back up half a kilometre in the other direction. Once he had, we left him to Sarah, and set out for the sands where Rose, who was going to drive pacemaker-cum-nanny Justine, had been waiting for yonks.
Things can only get better, we sighed.
And they did. Elena coped almost unconcernedly with the real world (just a couple of ‘oooh what’s that’s’), and she went through the dunes and the forest like one bred to it. She thought three times about her first taste of sand but, after a couple of pretty awkward shimmies, set off, in Justine’s wake, and, after a couple of hundred metres, I, watching from the dunes, saw her legs swing into official pacing mode and I knew we would be all right. And – for a first effort – mostly we were. There are and were so many things that can go wrong when a young horse does something like this for the first time, so we were happy that the initial float-fright was the worst we would get. (She learns quickly: on the way home she bundled herself on with only a moment’s hesitation). So I came home pretty happy.
Enough said. Here’s the tale in pictures.
Posted by GEROLSTEIN at 1:46 AM No comments:

This is the Real World? 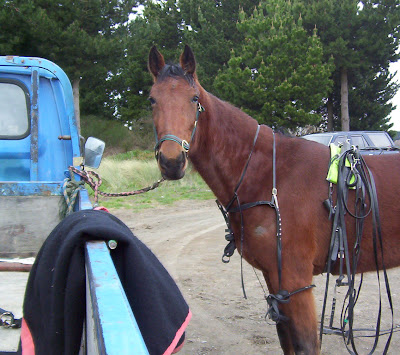 Posted by GEROLSTEIN at 1:44 AM No comments: 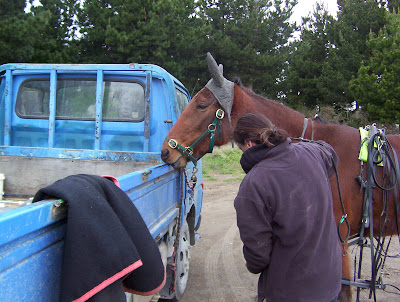 Posted by GEROLSTEIN at 1:42 AM No comments: 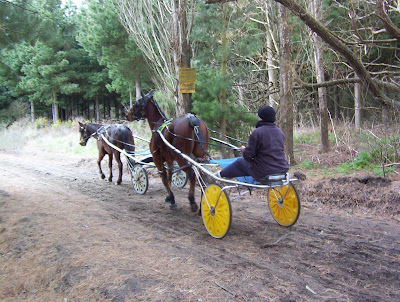 Posted by GEROLSTEIN at 1:40 AM No comments: 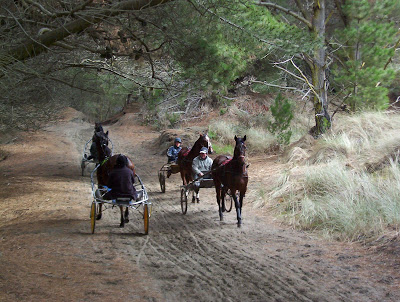 Posted by GEROLSTEIN at 1:37 AM No comments: 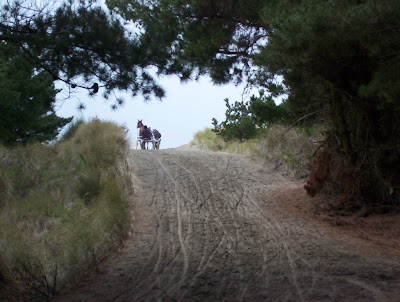 Posted by GEROLSTEIN at 1:36 AM No comments: 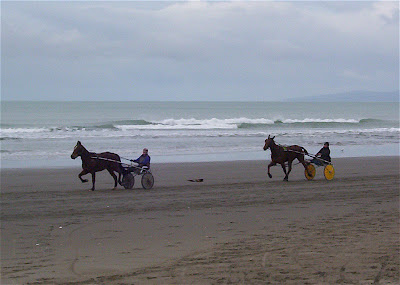 Posted by GEROLSTEIN at 1:34 AM No comments:

On a vast beach 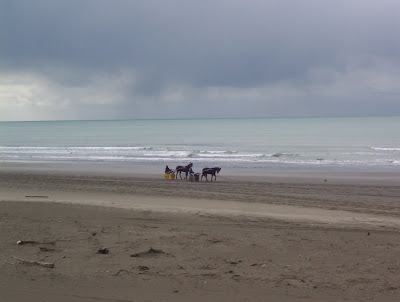 Back up the dunes 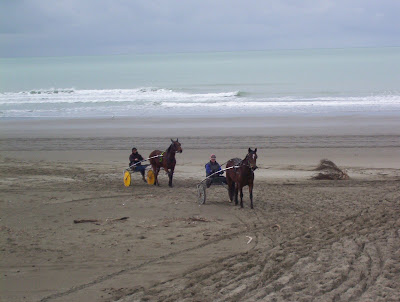 Posted by GEROLSTEIN at 1:27 AM No comments: 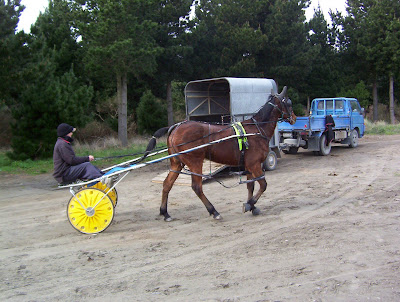 Posted by GEROLSTEIN at 1:24 AM No comments: