Elena is a racehorse

Two years and ten months after I raised Doug’s hand in the Yearling Sales auction ring, paid my money, and brought the beautiful Elena home to Gerolstein ... two years and ten months of loving care, education, training and wondering down the road … today my ‘princess’ stepped on to a racetrack.
It wasn’t raceday, of course. We still have a way to go to get there. But it was her first experience of racing conditions: a four-horse ‘learners’ workout’ (with speed limits) at Rangiora racetrack.
The love, the education, the training have all been done: now it was time for the wondering to have some sort of answer. Wondering what? Why, is the lady fast enough, well-gaited enough, enthusiastic enough, just plain racy enough to be one of the limited percentage of standardbred horses who actually make it to the track as racehorses.
I’d like to be able to say that the answer was an unqualified ‘yes’. Dammit, I am going to say that the answer is an unqualified ‘yes’. Although driver Blair Rennie (‘she would have beat them easily’) must have a small reservation. Elena, you see, has a quirk. She is an adorable, loving, well-behaved girl 99 percent of the time. She seems to suffer a bit extravagantly when she gets in season, and whinnyingly clucky at the sight of other people’s babies, but that’s nothing. The problem is that when she gets a fright … she flings her heels in the air. She boots. When you have a sulky on your rear end, and a driver in that sulky, this is not a nice experience for them. I know, I’ve had it happen to me (not with Elena). She doesn’t do this often, but … 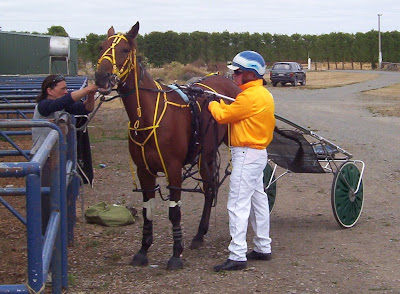 So. Today. Wendy geared our princess up in her brand new yellow quick-hitch harness, Blair donned the soft-boiled-egg colours that have yet to make it to a New Zealand raceday, and out Lélé went, looking a treat, pacing nicely .. until she came upon a large blue tractor tugging harrows along the track. Unfortunately, large blue tractors in your path are part of harness racing, but Elena doesn’t yet know that. So she booted. But Blair got her down quickly, and all was well. For now.
The four learners all began cleanly -- Elena designedly carefully for her first view of a zinging tape -- and she slotted in, as intended, to the rear of the Indian file. Sigh of relief. But then we got to big blue-tractorland – the first bend – and BOOT! By the time she got down, the other three horses were 100 metres or more down the track. Bugger. The day looked like turning to catastrophe. But, having done her act, Elena now put on her best stride and she set out after the others. You don’t make up 100 metres in a mile, but she was trying, pacing along like a veteran and looking glorious. With 800 metres to go the gap was down to 10 lengths, but, as blue-tractorland loomed, the leader galloped and Elena had to take evasive action while it re-found its feet and started going forwards again. Down the straight, she was still behind … with 100 metres to go, still several lengths last … 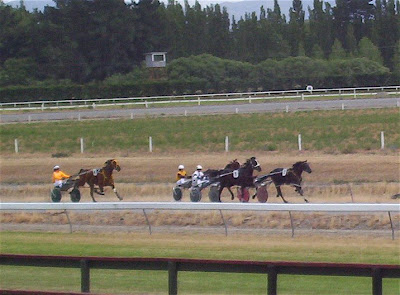 But blow me down, as the others raced for the line, Elena comfortably closed that gap and she finished along with them. The record shows she was 4th, beaten 2 ½ lengths. Our photo makes it a bit nearer than that. The record shows they ran their 2000m in 2mins 54, our stopwatch says 2mins 49.6. The official last half was 62.1, the last quarter 30.1. But whatever the first three ran, Lena effectively did 100 metres more … thus, probably, going faster than the ‘speed limit’ time for the heat. And her last half and quarter were done in many lengths quicker than the figures given. The film Wendy took (which I am trying so far unsuccessfully to attach here) times her final quarter in 28 seconds and bits. And that is racehorse time.
So, here is one owner who has come home a happy man after seeing his horse finish last, with an horrendous gallop to boot, in a learners’ workout heat.
Because there’s no doubt that the lady IS a racehorse. That she will be a racehorse.
After a small cure for blue-tractor-phobia and related reactions.
Posted by GEROLSTEIN at 1:08 PM No comments:

Let the horses do the energetic stuff..

But they're not the only picturesque beasts at Gerolstein

I'm Minnie. I destroy mice, chase birds, climb trees, devour biscuits .. and I sleep on Kurt's bed on the nights that it's not warm enough to go out prowling...
I also snooze on Wendy's bed some daytimes when I don't feel up to trying to keep up with the horses 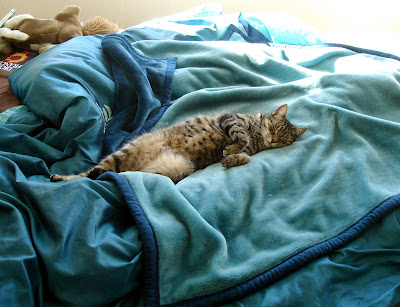 Posted by GEROLSTEIN at 6:29 PM No comments:

Will the lady be a racehorse? 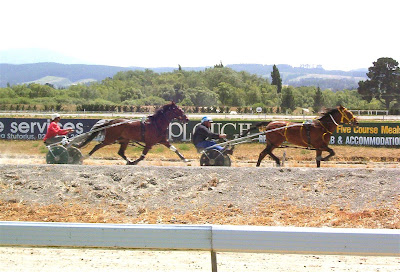 Today Elena (driver: Blair Rennie) strutted her stuff around Rangiora racecourse, in the company of Wendy and her Ned. A brisk mile and a half (two laps and a bit), finishing together in 3 mins 19 ...
Another stage in my Princess's progress towards becoming a racehorse successfully accomplished... 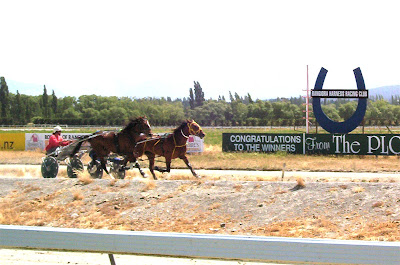 Posted by GEROLSTEIN at 11:01 PM No comments:

Mother of the week

This week, it isn’t any of our usual horsey starlets who have hit the headlines..
Elena fittens up steadily on the beach, with a debut at the workouts becoming envisageable 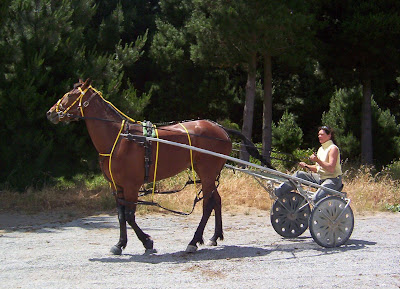 Barney and Dobby work out, prior to qualifying (big him) and racing (little him)
The babies grow on apace… D’Arcy with a wee visit to hospital and Lucie .. still posing 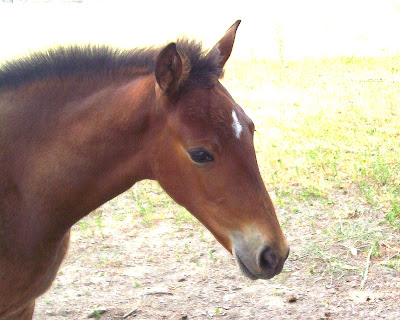 The Duchess prepares to start on her next baby, with a little manual and veterinary assistance 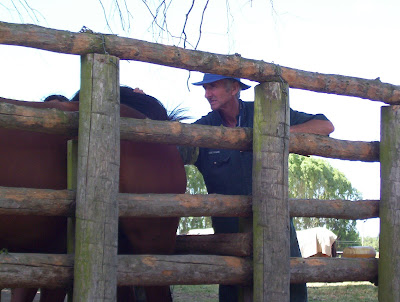 Wanda prepares to head north for a new life
Boris is entered for his first ever race on Tuesday
but this is Sally’s week. Dear old Sally, down the back paddock, where she has given birth to Ned, Rose and Mikie.
But, before those three, Sally mothered George. ‘General George’ to racegoers. Well, George (sold too expensively for us at the yearling sales) had a nice youthful career here in New Zealand, and then was sold to Australia where he has recently raced with credit. This week, he ran no less than three times. He won easily at Goulburn, narrowly against much hotter opposition at Bankstown, and tonight he went out once more, at Harold Park. After getting in a ghastly shut-in position, he rocketed home late to go down by only a neck. Two wins and a second in very polite New South Welsh company! Great work, George. Sally is definitely ‘Mother of the Week’ at Gerolstein! 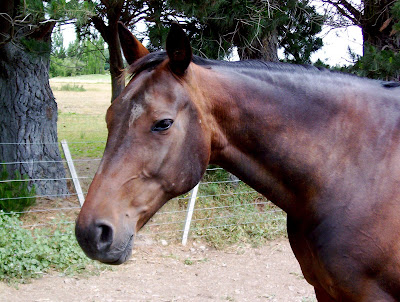 Posted by GEROLSTEIN at 1:17 AM No comments: