-
It is three years now since Jack and I started our ‘Eurokiwi’ adventure in New Zealand, by breeding both my trotting mares, Gwen and her daughter La Grande-Duchesse, to the outstanding French stallion Love You.
The result, as I’ve recounted from their babyhood on, is the two now two year-old trotters, D’Arcy de Gerolstein (boy) and Lucie de Gerolstein (girl), both of which have been for some time in the care of trainer Murray Edmonds at Motukarara.
Two year-old trotters are not thick on the ground in New Zealand as early as December of the year and only a handful has so far been seen in action at the various workouts and trials, but today that number was swelled by … our D’Arcy!

And so, on a stifling Canterbury morning, my eyes heavy with hayfever, I revved up red Ted and made my way through the hundreds of red lights between Sefton and Addington Raceway. There he was, as I walked through the door of the vast, echoing hangar that does duty as stabling at Addington: no longer the little pony with the bandage on his knee, quietly standing in the shadow of the showier Lucie, 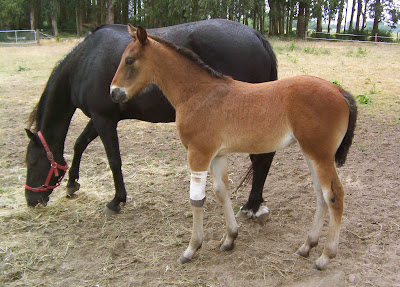 but a fine tall adolescent colt, yelling his head off in a voice which sounded as if it had barely broken. Little D’Arcy, little no more. But not exactly grown up, either! 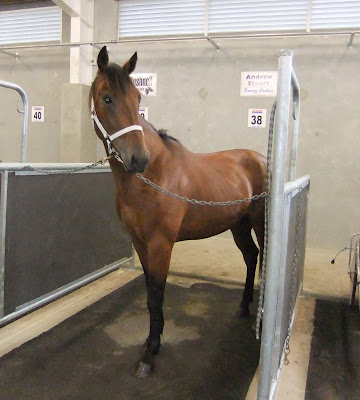 The point of the day’s exercise was not ‘a race’: D’Arcy and his stablemate, the little filly Martini, were at the track simply to get their first experience of something like race conditions -- their first mobile start, to start with! – and their heat comprised just four inexperienced horses: another two year-old (a Monarchy filly), and, rather oddly, a four year-old. 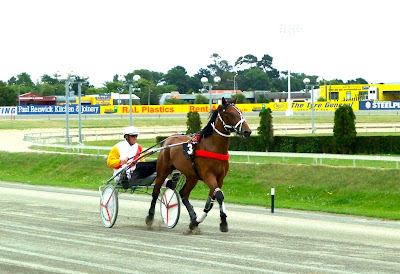 When the ‘race proper’ began, Murray eased D’Arcy a couple of lengths back from the mobile arm. The Monarchy filly showed plenty of ringcraft, nosing up to the grill and going out clearly in front of the field, with Martini in second and D’Arcy settled in a couple of lengths back, trotting nicely, in third. All three babes were behaving impeccably! With half a kilometre of the 1950m to go, Murray took our boy off the rail and – as they came round the final bend -- gently moved him forward. Into the straight, and the wee lad kept on coming, passing the two fillies nicely with the finish line approaching. Having got to the front, however, he must have spotted a big question mark? OK, so what am I supposed to do now? He gawped about, put in a rough stride, and Murray had to call his mind back to his job, as he passed the line ahead of his two companions… 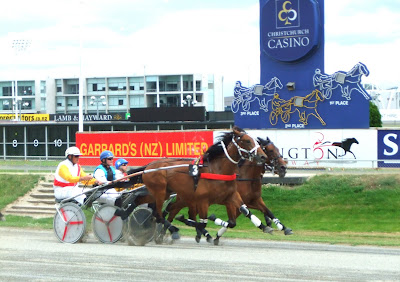 Mission accomplished, in a respectable 2mins 46 secs, with the last half in 63 and the last quarter in 30.6. And a sentimental mission accomplished, too – the first appearance on any New Zealand racetrack of one of the progeny of Love You could be counted a ‘winning’ one.

So, on from there we go! Because we have barely started yet. There is much hard work and much, much refining to do. When he next comes to the track, the refinements will have begun to set in. The pedicured feet, the new shoes .. for a first glimpse of something more like ‘racing’ as opposed to ‘running’ .. and I will bring my soft-boiled-egg racing colours and I shall have previously cornered the commentator – who did very well with the Gerolstein bit which has tripped many in its time – to explain that D’Arcy with an apostrophe is pronounced just the same as Darcy without one.

A new adventure begins …
Posted by GEROLSTEIN at 6:43 PM No comments: