In my attempts to identify these, some of the more enjoyable photographs which I found on e-bay yesterday, I've already posted a couple on facebook, with alas no results ... but I'm putting them on here, along with other little delights which have been identified, as a sort of blog-storage room, so that I shall be able to find them again, should a clue come up.


This lady and her show should have found a name by now, but no. It's New York. Photograph: White. Somewhere in the 1910s or 1920s. A Jewish (?) soubrette (?). I would say a small-scale show: it seems only to have eight chorus gentlemen. But the lady? Adele Astaire was suggested, but Stephen Cole says firmly it is not she (and he probably knew Adele) ... so the hunt goes on. 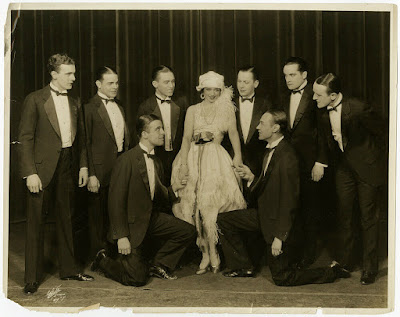 And how about this? Is it for real, or is it a burlesque. Could any costume designer seriously ask his period prima donna to wear this through-a-door-sideways-and-forget-stairs frock, fashioned from what is surely furnishing fabric or curtain material? And that pose? Arch or just drag-queen? Lady Bellaston? Lady Mary Carlisle? Operetta? Drama? Parody? It's White photographers again, so it can't be rubbish ... 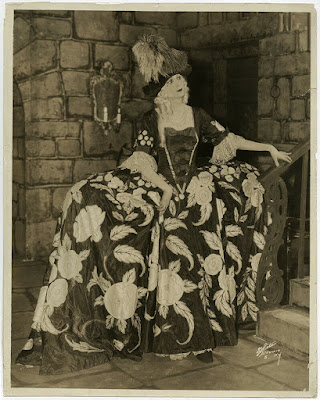 The next two pix are English, and, again, I truthfully haven't an idea. Both are pantomimes: one Cinderella, and, I would guess, one Aladdin, from Blackpool, the vendor suggests. I like the Blackpool (?) picture: the chorines actually have proper ballet shoes on! Those were the days .. 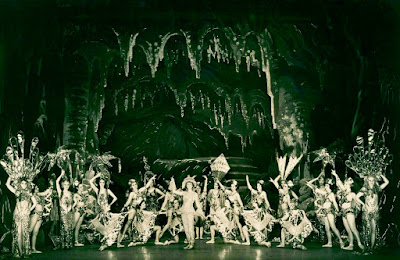 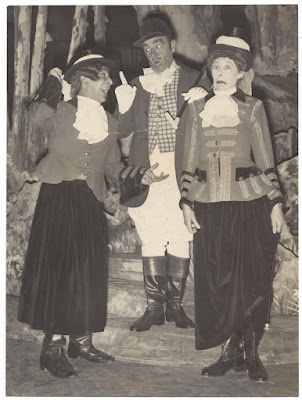 The next picture I have managed to date. Leicester Square with Stagg and Mantle and the old Empire Theatre, before it got demoted by MGM to being a cinema, visible. The year is 1902, because one can see that the Empire is showing Our Crown, a bit of hip-hip-hooway scenic spectacular, inspired by the forthcoming coronation. 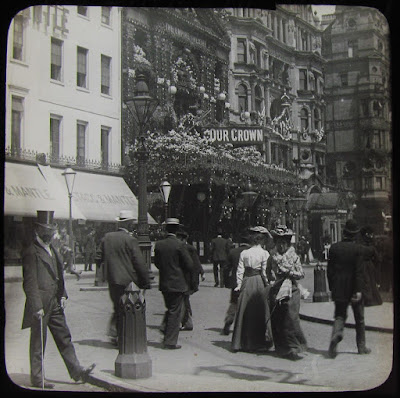 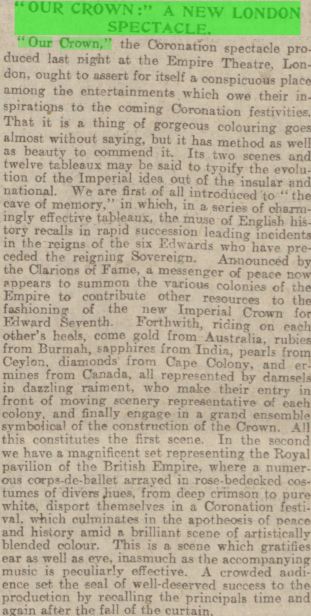 More edifying was the 1927 Broadway production of Kálmán's Zirkusprinzessin. Guy Robertson starred as 'Mister X' and Gloria Foy was the soubrette, Mabel Gibson. The horse was apparently called Fred. 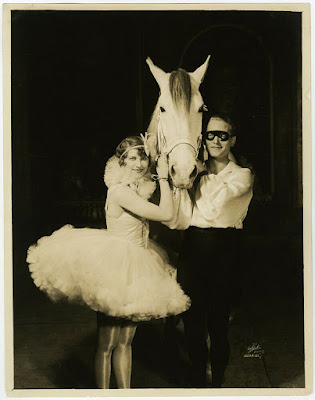 From an earlier period come three cartes de visite. The first is from one of the French opéra-bouffe troupes which visited New York during the boom for such entertainments. Paola Marié and Madame Angèle as Clairette and Lange in the celebrated Quarreling Duet in the incomparable La Fille de Madame Angot. I couldn't find a photo of this scene when I wanted one for a couple of my books, so I'm saving this one! 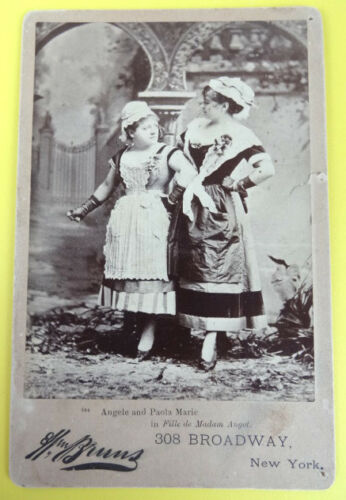 Another lady I couldn't find was Lizzie St Quinten, a British musical performer who distinguished herself on both sides of the Atlantic and, confusingly, then apparently became Mrs John Wood. In 1879 she sang in Les Cloches de Corneville at the Globe, later in The Naval Cadets and Madame Favart, at the Alhambra in Mefistofele III, Jeanne, Jeanette et Jeanneton, at the Comedy in The Mascotte and Billee Taylor at the Gaiety. In the 1880s she sang with the Hess opera company in America. She ran a St Quinten comic opera troupe through America and Canada in the mid-1880s, was three years in Augustin Daly's company, then returned to England, in 1891, and continued to appear in variety and pantomime. In 1900 she toured the play The Little Intruder before being snapped up by the George Edwardes organisation to play character roles in his touring companies. My last sighting of her on the stage in at Manchester, in panto, in 1908. And who was she? The Elizabeth St Quintin born 27 October 1852 in Tottingham, Lancs ... or somebody or other from Leamington Spa? 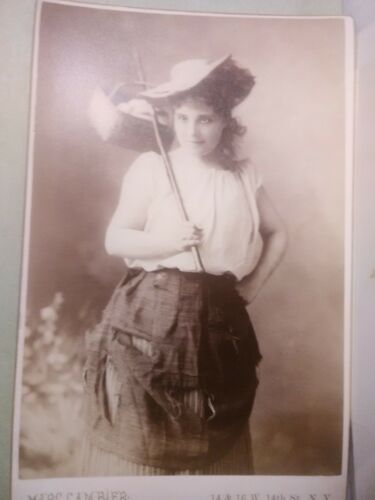 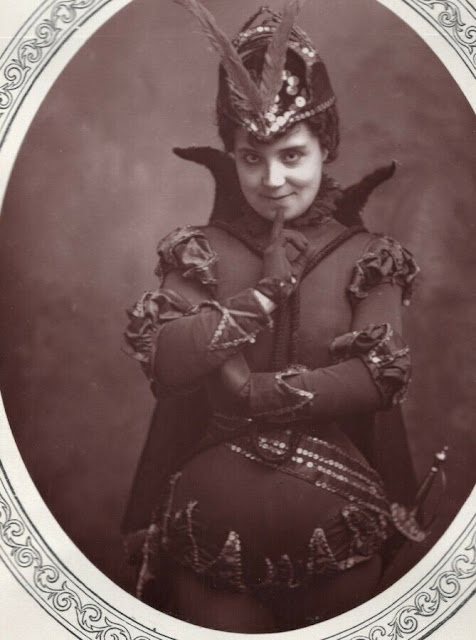 Mathilde Sessi was no such a problem. She is one of the operatic stars whom I selected for thorough biographical treatment in my latest opus, Victorian Vocalists. Most photos of her emphasise her extravagantly long blonde hair, so it was nice to find this one of her (as Ophelia?) which shows us, instead, her face! 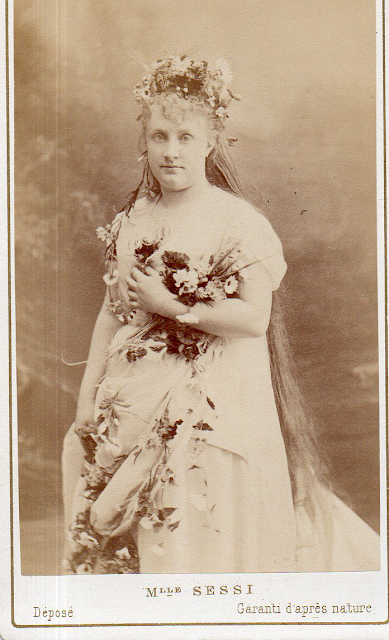 And lastly a 'theatre' which was, for a while, part of my life. The lovely little Garnier opera house at Monte Carlo is snuggled away inside the Casino building, just a hundred metres from my sometime home. I walked past it quasi daily, and on one occasion (I cant remember why) got to sing from its stage. The annual opera season there, alas, was brief, and I can, alas, remember only two performances there. Mirella Freni in La Traviata and Janis Martin and ?Lisa della Casa in Rosenkavalier. One of my most unfavourite operas and one of my favourites. Both gained from the size of the auditorium, but I remember little else ...

But all that was a very long time ago ... if not quite as long ago as this photo. Monte Carlo was still its once-glamorous self at the dawn of the 1960s. You could still stroll gloriously along here ... until the first of the grues (cranes, not prostitutes) put in an appearance and the destruction of that Victorian jewel that was Monte Carlo  began... 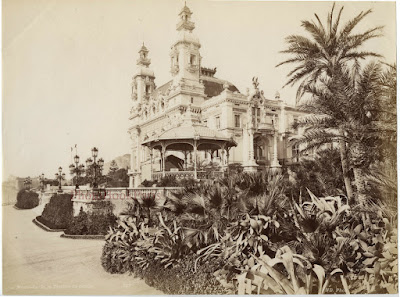