A Marvellous DUMB GIRL .. for the blind.

.
La Muette de Portici, thus originally known so as to avoid confusion with Carafa’s Opéra-Comique Masaniello of the previous year, was put on stage for the first time in February 1828, at the Paris Opéra, with Adolphe Nourrit in the role of the Neapolitan fisherman who leads a revolt against the Spanish.
The piece, with a text by Eugène Scribe, undoubtedly the finest stage poet of his era, and Delavigne, and score by Auber, largely known for his sparkling opéras-comiques, has been glibly christened, by those who like labels, ‘the first grand opera’ (as opposed to opera without the grand?).
What it was, was a combination, in 5 acts, of ballet, mime, and sentimental and political drama, illustrated by romantic music, choruses, and a goodly dose of that stirring patriotic stuff, exemplified by the hit duet, ‘Amour sacré de la patrie’, which was favoured in French theatres of the era. Perhaps the only thing more favoured was vast stage spectacle, and Scribe carefully catered for that by including an erupting Mount Vesuvius in the final act. 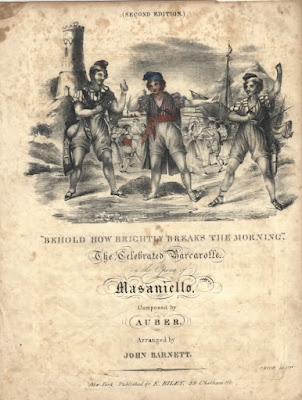 La Muette de Portici went on from its Parisian triumph to be seen round the world. It was particularly successful in Britain where it made a great hit at Drury Lane and, throughout the Victorian era, Masaniello was a staple repertoire piece in the British theatre, latterly in a variety of condensed versions.
In Europe too – where its revolutionary sympathies were on occasion fashionable – the opera was for many decades highly popular, but in more recent years it has – like the works of Auber in general -- dropped from the repertoire. The Anhaltisches Theater performances prove what some of us have always averred: that the Victorians were right, and that the 20th century was culpably wrong to sideline this enormously effective and important operatic masterpiece. 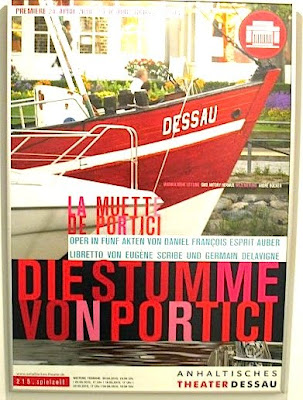 The piece is played at Dessau in another condensed version: no ballets and a shocking defusing of the spectacular Vesuvius climax, which, however, does not harm the vocal music.
And it is the music which is the success of this production. Conductor Antony Hermus is the star of the show, leading a powerful and often striking orchestra in a fine rendition of Auber’s score. The chorus, too, sing splendidly, reaching thrilling peaks of choral sound in what are some of the opera’s most effective passages.
But, if they are tremendous vocally, they are disastrous dramatically. In one of the worst examples of ‘chorus acting’ I have ever seen, this group fidget and squirm, ‘act’ incessantly, playing out ridiculous ‘characters’ and ‘stories’ behind the principals, no matter that those principals are delivering solo or ensemble music of importance. I was reminded of nothing less than amateur operatics of the 1960s. Perhaps the most devastatingly awful moment of the night came when the chorus of revolting fisherfolk sang ‘Down with the tyrant’ while merrily pulling bits of shopping out of carrier bags. Insane.
Unfortunately, this syndrome affected the whole show. Scribe’s historic story was unreasoningly forced into a 20th century visual production – that tired old ‘Italian gangsters’ gimmick seen out on hundreds of occasions since Ken Russell or was it Jonathan Miller -- and here wholly inappropriate and ineffective. The result resembled a bad, ancient musical-comedy staging. The show was marvellous when you closed your eyes. With them open, it was pitiful.

The leading vocalists struggled gamely against the production. The huge star role of Masaniello was sung by the young Mexican tenor Diego Torre. Short, with an enormous barrel chest, and a strong and staunch Italianate tenor voice, he worked hard, conscientiously, in his vast role. He never sang badly, but ultimately he failed to make magic. His first ‘hit’ solo, the barcarole ‘Amis, la matinée est belle’, failed to arouse one clap, in ‘Pourquoi pleurer’ he was frankly out of his technical depth, and his mad scene, poorly staged, was hardly even loopy. Only once did he arouse the audience to excitement, and that was in the celebrated duet, with Pietro (Wiard Witholt), a splendid baritone, as tall and slim as the tenor is short and wide. Witholt sang well throughout, but was sabotaged by fussy staging in his one big solo. Again, better heard than seen.
Angelina Ruzzafante had a pretty good stab at the prima donna role of Elvire. She started indiffiderently, her beautiful opening bravura ruined by the silly manouverings of a bunch of ditsy bridesmaids, but, as she progressed, she gave us some very sweet tones and, in Act 4, perhaps the only genuine pathos of the night. Yes, Elvira needs to be more than just sweetly sung, but Ruzzafante had a pretty good try. It is not her fault that she is not Cinti-Damoreau.

Eric Laporte gave a competent rendering of the role of Alphonse. If he did not make what he might have of his one big chance, he was never unpleasant and, occasionally, almost French-sounding.
And then there is Fenella, the dumb girl of the title. Fenella is a role which has been played by some of the greatest mime-dancers of the 19th century. Gabriella Gilari may be a good dancer, what she is not, is any kind of a mime artist. Arabesques and pirouettes say nothing in mime language. Mlle Gilari gave us a series of what seemed like about a dozen unvarying dance movements – kick, bend, arabesque, pose! -- plus an imitation of Isadora Duncan with a stomach-ache. And that was it. In a role that cries out for depth, fragile emotion and subtle acting, she just danced her little repertoire of steps, and held her stomach. Over and over. No matter what anyone else was doing. Once again, one had to close one’s eyes, listen to the beautiful and beautifully-played music… and be content.

Ten bravos to the Anhaltisches Theater for ‘rescuing’ this arguably great as well as grand opera. Further bravos to all concerned on the musical side of the production for their effective service to Auber and his music. And shame on those on the staging side of affairs for reducing an epic heroic tale – which in its time has sparked a war – to an affair of shopping bags and stomach-aches.
I understand this performance is to be recorded. Perhaps such a recording will encourage other opera houses to mount a (better) version of this superb opera. And later maybe Les Diamants de la couronne, L’Ambassadrice,  Le Domino noir, Fra Diavolo, Le Serment and the rest of the repertoire that this surprisingly now neglected composer gave to the world. I’ll come. 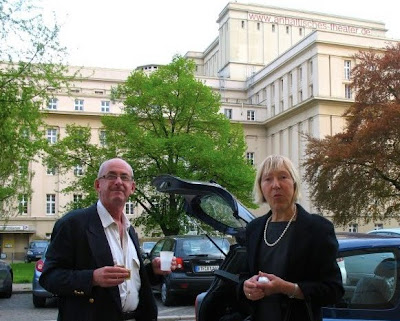 Posted by GEROLSTEIN at 7:44 AM