A new classic for Jersey

I’m back in my room, feeling a little as if I’d been hit between the eyes by a ten-pounder. I’ve foregone going out to the Jersey war tunnels for the Festival’s episode two – Jersey poetry and ‘cello music -- partly because I had no wheels but mainly because I wanted to sit down and take in what I’ve just heard. Episode one.

What we were promised was a ‘fanfare’ by Jersey resident Jon Lord (best know to the world at large through his work with Deep Purple), based on the island’s one and only wholly and unadulteratedly indigenous folksong, ‘La Chanson de Peirson’, which was here being given its first ever performance by the local amateur brass group, Jersey Premier Brass.

The Peirson of the title was Major Peirson, who commanded the native troops against the French in the so-called Battle of Jersey of 1781: ‘the last land battle on British soil’. Peirson won the day, but lost his life in the winning, and like victors (especially dead ones) from Classical times on, his name and his deed were celebrated in song and story. Also in a painting by Copley. And again in the name of a street, which runs off St Helier’s Royal Square where, it is said, the hero fell, and where the performance was to take place. 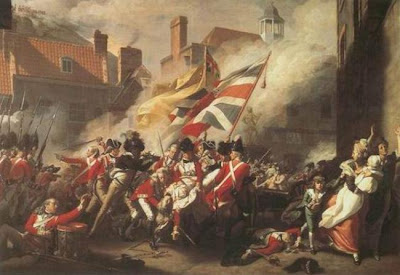 The piece was, thus, a thrice suitable choice to launch the festival, and, on viewing the programme, I thought it had all the makings of being the star event of the lot. Well, it very well may be. The other events will have to be pretty damn’ good to evoke in me the excitement and the pure pleasure evoked by ‘La Chanson de Peirson’. 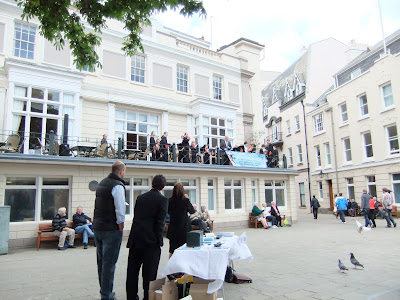 The work was in no kind what I had expected. For me, a ‘fanfare’ is what a row of heralds do when the Queen walks into the room. A burst, a blast of brass and end. And this is certainly not that. If I had to describe it in my musically old-fashioned vocabulary, I would rather call it a symphonic picture for brass instruments. A beautiful and extraordinarily atmospheric picture in which enchanting phrases and half-breath-halting moments give way to vigorous and stirring strains …
The trouble with listening to a brand new work is that it is so hard to take everything in. You don’t know what’s coming, you can’t judge shape somehow, all you can do is just let it flow over you. And flow it did. I need to hear this work again. Preferably right now. Oh, there will be heaps of possible occasions in the future. I imagine that this new ‘Chanson de Peirson’ will become a Jersey classic, a must at any and every future Jersey Festival, and I also imagine that it will go on to be performed by brass ensembles around the world. And I will be able to say: I was one of the few hundred people there, in Royal Square, with my paper cup of Green Thai Soup in my hand and my notebook in my head, when it was played for the first time. 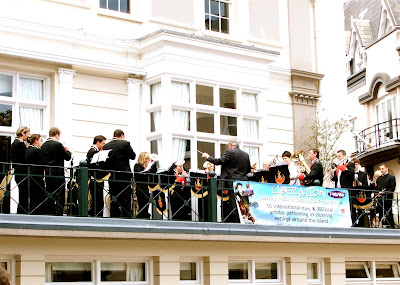 Undoubtedly, in the future, it will be played more skilfully. The piece is far from easy technically, above all in its timing, and the young group and their cheery conductor were tested to the edge of their abilities by it. But they got through its intricacies quite remarkably well, and I reckon there were less bloops today than there were in the orchestra of the Deutsche Oper (see below) during last month’s Ring.
I have just one wish: next time I hear Lord’s ‘Chanson de Peirson’, I would like to hear it on its own. Uncomfortably sandwiched between ‘Death and Glory’ and ‘How Do You Like Your Eggs Fried?’ it shone like the proverbial ruby on a rubbish heap, showing up the facile movie and dance-band material as truly trivial stuff. Actually, what I’d really like is to hear it ringing out from the flare-lit, night-time ramparts of Mont Orgeuil … I wonder if the Festival committee and Premier Brass could arrange a repeat performance for Sunday night.

So the Jersey Music Festival of 2010 is on its way, and on its way with a veritable flourish and – yes – fanfare. And I’m culpably missing Sir Nicholas Young’s ‘keynote speech’ on ‘Liberation’ at the Town Hall as I sit here, wishing that it were midday again, and that the performance of ‘La Chanson de Peirson’ was yet to come, with me better forearmed and better comprehending, and just having some idea of the treat that was in store for me ..

But it's time to move on .. tonight it’s Schubert and Tschaikowsky.. so I need to change my head... 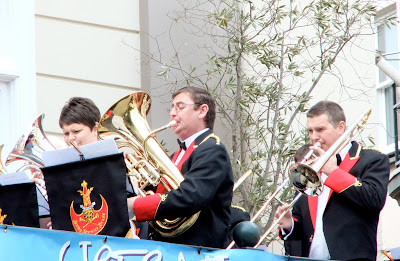 PS I wonder, were the world’s music critics and writers there among the pigeons and the soup-cups … the world’s press and TV? ... I saw a few man-sized cameras .. or, surely … Kurt Gänzl doesn’t have a scoop!?
Posted by GEROLSTEIN at 7:15 AM