Durrell .. the name says everything

.
Well, Jersey keeps on coming up with one treat after another.. 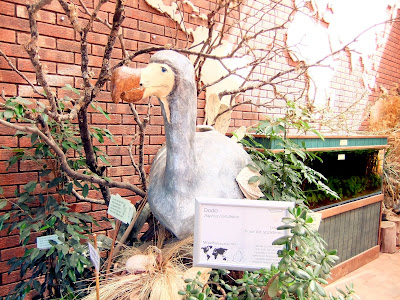 Today I visited what is rightly nowadays named ‘Durrell’. It has had previous names .. variations on the Jersey Wildlife Trust theme ... but now it bears the name of its famous founder, the animal conservator and best-selling author Gerald Durrell. I grew up with the books of Gerald Durrell. I still think My Family and other Animals one of the funniest books I have ever read, and I can’t remember how many times I read The Bafut Beagles (I still have the copy on my thinned to 5% bookshelves) and then, of course, every single Durrell book thereafter.
I don’t quite understand how, on my two previous visits to Jersey, I didn’t get round to ‘doing’ the zoo which Durrell created here ... the story related memorably in his books… but maybe fate was just telling me to wait.
One of our party at the famous Guernsey race-meeting of 2 May (see earlier blog) was Dr Lee Durrell, Gerald Durrell’s widow and … well, as a result, I headed happily out thataway today on the number 23 bus for a rendez-vous at what I suppose one has to call a ‘zoo’.
‘Zoo” somehow to me means animals in cages, and that is not at all what Durrell is. Lee gave me a wonderful guided tour (not to mention lunch in the very agreeable café of the establishment) of the various installations – from bears to monkeys to snakes to all those fascinating little fellers that Gerry D tells of in his books -- and my camera didn’t stop clicking for three and a half hours. They are irresistible.
I’m not going to talk too much here, I just intend to fill a page with pictures .. birds, monkeys, even a snake .. but I have to tell you first what Durrell is. It isn’t London Zoo. The birds fly around in towering pagodas of netting, the monkeys and the bears play in wide open chunks of nature (with attached bedroom suites!), only the reptiles are behind the traditional glass (thank goodness!) and the littlest monkeys and tiny bestioles in anything resembling a cage, yet cages flooded with greenery..
The ‘zoo’ also doesn’t exist just for itself. And this I didn’t know. It is really a showcase for the work that the Foundation created by Gerald Durrell, and now headed by Lee, is doing in nearly twenty countries around the world: saving all sorts of threatened species in Madagascar, Mauritius, South America, the Caribbean and elsewhere from the destruction of their natural habitat and also from unscrupulous (German?) animal dealers. There are field stations of Durrell around the world, while, at home, the Foundation educates, training future animal researchers and keepers in the tradition established by Gerald Durrell. It is a huge enterprise, and the lovely animal park I visited today is just the tip of its iceberg.
It is also quite beautiful, not too big to be enjoyed in an afternoon, and, well, come and see for yourself ..
You have to come out of this living gallery of birds and beats with your little favourites. The meerkats are top of the pops right now because of the Lion King, but my choices, I think, would be the frog that is called a chicken (and, alas, in its home country eaten like one), some of the incredible ‘ugly’ Chinese-mandarin faced monkeys and a most beautiful bird from Madagascar … but you can judge for yourself. Here – beginning with Lee snapped beside the memorial statue of Gerry, and going on to species whose names I would never remember if I tried -- is a volley of pictures from my day at Durrell! And I’ve saved my favourite Malagache bird for last!
Lee has supplied me with ID for all these lovely creatures, so in order we have the Nicobar pigeon, the Mindanao bleeding heart dove, the eyelash viper (sounds like something out of Absolutely Fabulous), some Chilean flamingos, a Sumatran orangutan, a western lowland gorilla, a gaggle of mothers and baby ring-tailed lemura, the sweet Alaotran gentle lemur and a Madagascar crested ibis. How about that! 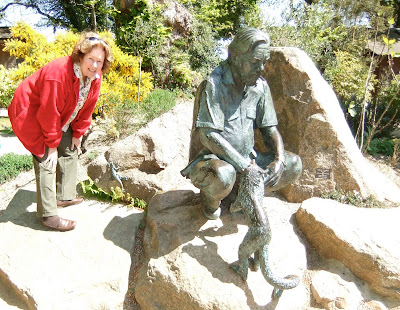 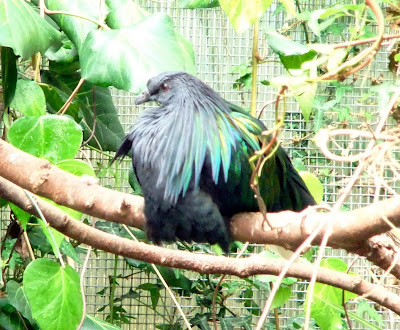 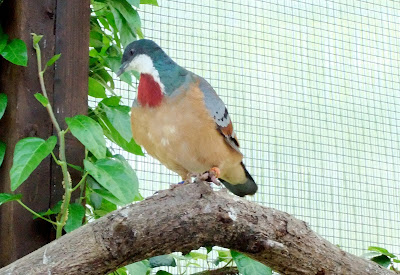 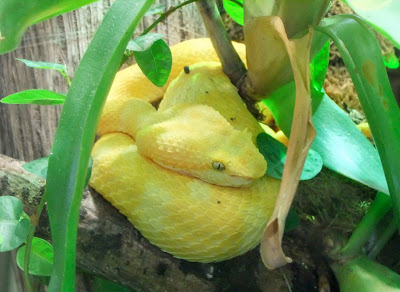 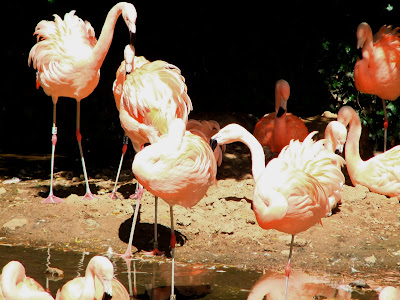 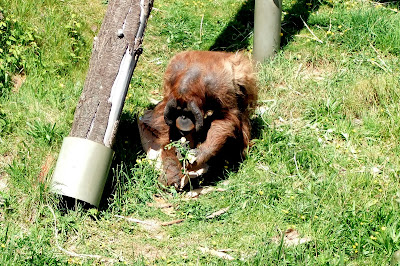 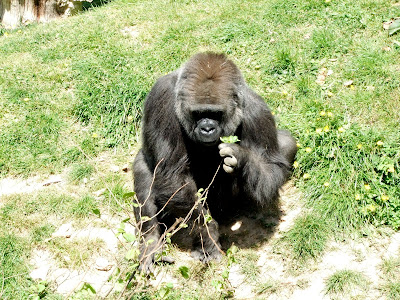 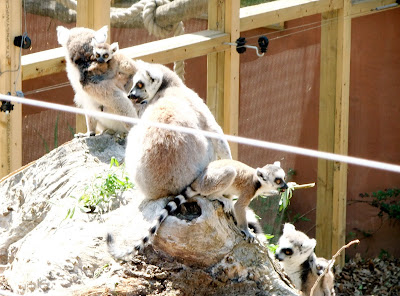 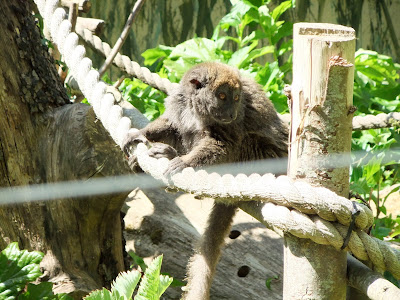 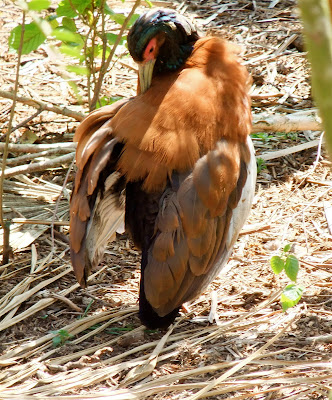 PPS there are more, more, more but how many pix can a blogger stand?!
Posted by GEROLSTEIN at 1:01 PM