.
Alas, because of the eternal transport problems, I had to miss this morning’s master classes at the Jersey Academy of Music. I’d particularly have liked to have checked out the singing one, given by Scots tenor Nicky Spence, if only just to see how it compares with my own poor efforts. And I’d have also liked another chance to see my two (newly) favourite violinists in action. But St Leonards is too far to walk from St Helier, and at 1pm I had to be at the intriguingly named Hamptonne for ‘Jazz at Hamptonne’.
Now, I am not a ‘jazz’ aficionado. I know little about what is nowadays called ‘jazz’ and I squirm when I hear my favourite songs – or their lyrics at least – being minced up to musically unidentifiable vocalisms under that description. ‘I like to recognise the tune’.
But anything done well is ‘done well’, and I was pleased that my friends Simon and Beata were eager to go (and give me a lift) for two reasons. One, because Wu Qian was to vary the jazz with some piano pieces and, two, because the featured artist on the bill was Jacqui Dankworth.
The last time I had anything to do with Jacqui, she was a very young musical comedy actress and I was a West End casting director. And neither of us is going to tell you how long ago that was.
Since then, she has reinvented herself in the mould of her wonderful mother, Cleo Laine – a frightfully dangerous thing to do – and I was eager to see, given the acclaim and success she has had, exactly what was up.
We got to Hamptonne after a dreadful drive – how can the roads of so small an isle, with so small a population, be so badly and frequently traffic-jammed? – just in time for the first set. 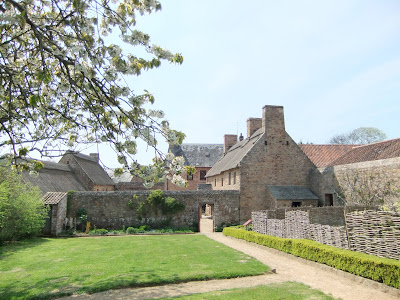 Hamptonne is a stunning old farmhouse complex, now turned into a rural museum, but it boasts what looks like a permanent marquee and a delightful adjacent lawn which together make it ideal for semi-al fresco entertainments. 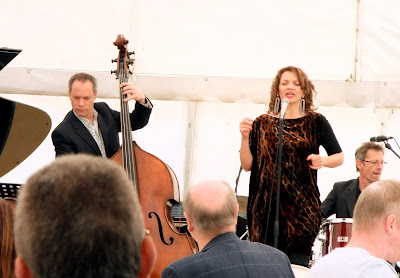 We’d barely sat down when Jacqui and her three musicians began. The first song was pretty indifferent, and I started to become uncomfortable. The second, an endless and rather monotonous piece by Sting was worse and salvaged only by a lovely delivery of the last couple of lines. ‘Versions’ of what used to be ‘Blue Moon’ and ‘I’ve Never Been in Love Before’ (once one of my own regulars) followed, and by now I was worse than uncomfortable. This was, frankly, painful.
The voice is open and utterly free of vibrato. Fine. But also utterly lacking in warmth. And there is a great big hole at the top of the chest voice range where the thrill ought to be. And the head voice sounded simply feeble. I was horrified. A chanteuse of even small reputation cannot sing like this. And Jacqui is of much more than small reputation.
The only relief to a grim first set was a wholly lovely song ‘It happens quietly’ written by father John and not demanding any excesses of range or dramatic performance. 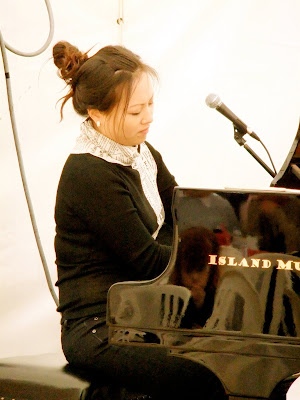 I felt so depressed that I ran for a pint of Liberation Ale (yes, truly), and I got more depressed when Wu Qian, after a lovely ‘Clair de lune’, given with her trademark gentle touch, cancelled her promised Satie to zip away for a rehearsal for tonight.
I gloomed through some capable, pleasant, backgroundy piano and sax-clarinet music by locals Peter Thompson and George McAllister, pausing only to wonder ... why play the classics, such as ‘Stranger on the Shore’, and get yourself compared with the great artists of forever, when there are a million other pieces of music in the world to play with and make your own? 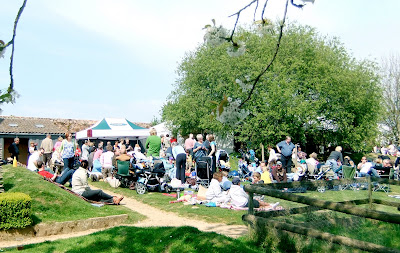 That same thought stuck when Jacqui and her far-too-frequently-introduced boys returned for their second set. She started with ‘Mood Indigo’. But she made a pretty fair job of it. And, then, something clicked. Her second piece was ‘Sweet Devotion’, a self-written number, and now, at last, suddenly, everything came together. The hole in the voice vanished, the head voice clicked into gear, the phony club chantoozie (‘I’m only here to sell you my CD’) business gave way to genuine feeling and style, genuine warmth, and out of the blue we had one big ‘YEEESSSS!’
My heart squeezed. She CAN do it. So what was all that other stuff about?
I put my hoorays on hold through pretty convincing ‘versions’ of ‘On the Street Where You Live’ and that old holiday camp fave ‘Almost Like Being in Love’, I warmed nicely through a more recognisable ‘My Foolish Heart’ … and, in the end, we got there. All of us. By the time the singer reached her final number, ‘Sittin’ on top of the world’, she had roused the previously politely enthusiastic audience to yows and wows ... and I was right in there yowing and wowing with them.
She CAN do it. There is no hole, the top is sweet and powerful, the bottomest bits are grand, the warmth IS there, the voice is perfectly OK, the performance too, and the personality – always attractive – is whoopee. But Jacqui, love, why in the hell did you make us sit so much indifferent singing before finally giving us what you have got?
And I’m really glad that you have got it, for old time’s sake, for ... well for all sorts of reasons. But, in spite of the lovely surroundings and the Liberation Ale, you did give me some really worried moments. What is the problem? Are you just not a morning (or early afternoon) girl?
Next time I come to hear you, I’ll make sure it’s in the evening, OK? And promise me you will sing ‘Sweet Devotion’. Yours sincerely, Kurt. 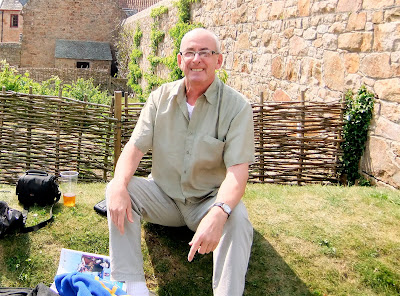 I recently came across your blog and have been reading along. I thought I would leave my first comment. I dont know what to say except that I have enjoyed reading. Nice blog. I will keep visiting this blog very often.

Just found yours ...
Have tried to find a way to reply but can't so this is my best effort ..
Yay
I'm at ganzl@xtra.co.nz