.
Sunday, and the final day of the Jersey Music Festival.
After last night’s adventures in city square, I struggled slightly to get under way this morning, but our first event was a Yacht Cruise Concert – a delightful concept – so I hauled myself into gear and headed down – past the Liberation Day entertainments in that same square where I had been so liberationally entertained the night before – to the quayside, only to find that the event had been blown off. Cancelled by the coastguards because of wind and choppy seas. What a shame.
Nothing to do but head home again, past the square and what I’m sure was a recital by a reincarnation of the Beverley Sisters, to my Bay View nest.
En route, I glanced worriedly at the sky. Tonight’s grande finale to the Festival, the multi-concert on the bastions and reaches of Mont Orgeuil was pretty much an outdoor affair and, well, for spring the weather was not exactly springlike..
In my usual position of ‘no wheels’, I thought maybe I would walk to Gorey (10km) so I set out (muffled up in every bit of warm clothing I am carrying with me, Turkish woolly cap included!) down the coast. Before I had gone halfway, however, a nice pale blue bus hove to, and I completed the trip in comfort.

Mont Orgeuil is a magnificent fortress, magnificently restored, which looms impressively over the sometime fishing village of Gorey. I have, in my time, spent many hours exploring the castle’s interiors and exteriors, and I’ve described and photoed it lengthily in this blog, but I was still glad to arrive early so as to have one more chance to wander around its rooms and its ramparts. It was a brisk wander, for tonight a cuttingly chill wind was snarling round the upper reaches where, alas, several performances were scheduled to take place. 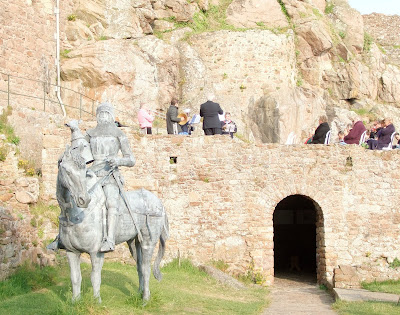 I sat by the ramparts, with a nice egg and cress sandwich, and listened to the sounds of the Jersey Youth Choir and the St Ouen’s Ladies Choir whispering sweetly forth from the marquee on the lower reaches, and I braved the thankfully fading gusts of the middle reach to listen to five rather more-than-fortyish gents with brass instruments (The Brassoles) enjoying themselves in arrangements of pieces from ‘Frère Jacques’ to ‘Summertime’, before, at seven o’clock, it was time for the main event of the evening: an Operatic Concert by the Eden Sinfonia and soprano Elizabeth Watts, in the main marquee. I sighed. I was back on safe, home ground: vocal music! Tonight I would be able to be as splendidly authoritative in my remarks as my new friends Michael and Martin had been all along. 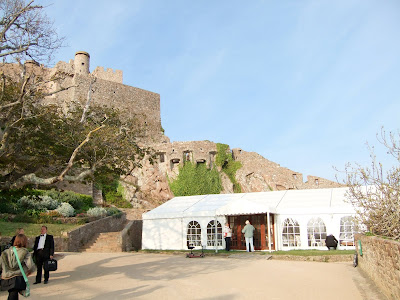 In fact, it was a shared concert. Daniel Cohen and his orchestra, the Eden Sinfonia, gave us some gentle and charming Handel and Glück, and then, rather surprisingly in a so-called operatic concert and a section otherwise devoted to serious classical-period music, a twentieth century ‘Ballade and Sephardic Melody’ by Israeli composer, Paul Ben-Haim. I found it confusing and weird in parts, but it gets to you in a most insidious way, and the lady ‘cello soloist certainly made the most of her opportunities in some lovely exposed passages. In the second part, the orchestra gave the rather long (for this type of concert) ‘Salzburg Symphony Number One’, and pleased everyone mightily with a delicate playing of the Cavalleria Rusticana intermezzo. I haven’t really said anything about the wonderfully fluid Mr Cohen, and I should have. At twenty-seven, he is obviously a big rising talent (go on, tell me he is risen already!) and another one I’ll be ‘following’ when I leave here.
And, now, the nitty gritty. Miss Elizabeth Watts.
I like a concert in a room, in ‘parlour’ conditions. A concert where the singer is just a few metres from you, and you get to hear the voice as it really is. In the nude, so to speak, with nothing that can be hidden. Well, this wasn’t a room … it was a tent. Miss Watts had to enter and exit from an adjoining office and, when singing, compete with the billowing and flapping of the tent roofing, with the giggle and gaggle of children outside, and any of a hundred other distractions. Did she pout and make excuses? Not a bit of it, she just gave us a winning grin and got on with it: and the result was a treat.
Elizabeth Watts has been a serious prize-winner in her time, and it is easy to see why. Not only does she have a lovely, young, fresh soprano voice, flexible and well under control, but she has the personality and the warmth (without which life and listening can be very boring) to go with that voice, a choice sense of humour, and – in a ‘room’ situation like this, you feel she is taking you into her personal confidence when she sings her arias.
She began with ‘Lascia ch’io pianga’ and we knew, straight away, that we were going to be ‘all right’. There’s not a huge amount to do with this aria except invest it with a certain amount of dolorous feeling and execute its ornamentations neatly, and that she did. Next, we stepped up the gas, with ‘Piangerò la sorte mia’ from Giulio Cesar. This is Handel how I like him, and Miss Watts handled him how I like it. Sufficiently dramatic, plenty of colour and sorrow, and all the technical difficulties made to seem as if they weren’t technical or difficult at all. I enjoyed this one much more than the jolly Handel of ‘Bel piacere’ (Agrippina).
However, with the Agrippina Miss Watts made her statement of intent. With that song we said goodbye (with one exception) to the gloomy and the dramatic. From here on in, we were going to have fun. Fun? Oh, much, much more than fun, because coming up was the highlight of the concert, the highlight for me of my musical-vocal month (not forgetting even Masaniello). The next number was ‘The Soldier Tired’ from Arne’s Artaxerxes. And here the singer’s wonderful exuberance and her talent for the joyous flowed forth, while her voice flowed, up and down Arne’s voluble roulades, like a roller coaster on a merry Sunday spree. It was magic stuff.
Here is the place for a Gänzl lecture. I can’t not do it, but I will keep it short. Please, please can we have more English songs and arias from English singers. The Artaxerxes gave nothing in quality to the Handel and Mozart on the programme, so why don’t we hear it more? Why do we not hear the wonderful arias and music (and English words) of such composers as Henry Bishop? This singer would make a malheur with ‘Tell me, my heart’. Well, for now, I’ll make do with ‘The Soldier Tired’ – which may have been an everybody’s piano-stool item, and a frequent debut piece for young singers in the nineteenth century, but is a lostish jewel now. Bless you, Miss Watts, for bringing it back. And for bringing it back so brilliantly.
In the second part, we got back to the better known stuff with a delightful ‘Deh vieni’ (this lady must be, and has been, a perfect Susanna), and a flowing ‘Ach, ich fühls’ with all those terrifying long, one-breath phrases finished off beautifully. Her first Pamina is apparently scheduled for soon. I may be a fan of the ‘joyous’ Elizabeth Watts, but that would still have to be worth a visit. And finally we got ‘O luce di quest’ anima’ (Linda di Chamouni). You can get tired of this soprano bon-bon, but not when its sung with the sprightliness and unpretentiousness that Miss Watts displayed. In her hands the aria isn’t just a vocal showpiece, it’s a happy country ditty. And so much the better.
There was more than sufficient applause to justify two encores, and the result was a classic ‘O mio babbino caro’ and a slightly naughty ‘Mein Herr Marquis’ (why in English?) where a bit of camping around sometimes got in the way of the notes. The part of Adele is far too soubretty for Elizabeth Watts, and I hope she never plays it, but the audience adored it.
What I adored and what I will go away long remembering was ‘The Soldier Tired’. It goes firmly into my list of Great Highlights of the Jersey Music Festival 2010, alongside the best of Benedetti and Sikhovetsky and that still memorable Fanfare.

I was not looking forward to awaiting the long bus home, so I was shiveringly grateful when nice gentleman offered me a ride in his glorious Merc. And thus I was chauffeured back to St Helier and the ‘Festival Club’ at the Lazyjack Room of the Royal Yacht Hotel by Ron Hickman (the ‘Black and Decker’ man) and his wife, Helen. He even offered me a drive of his classic Lotus Elan (oh hell, he designed the thing!), but I explained about Red Ted, and told him Lotuses were a bit outside my comfort zone! Jersey hospitality reigns again. Thank you Ron and Helen. 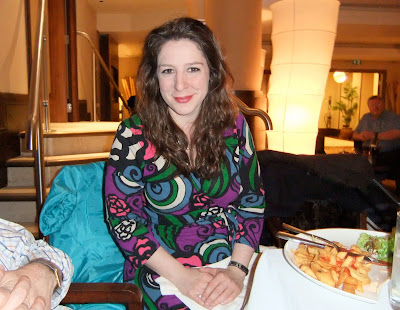 And so, to a last session with the Festival gang – organisers and performers – a couple of beers and a nice bloody steak sandwich and chips, while taking the opportunity to happy snap (I’m becoming notorious for it) the star of the evening deservedly attacking her pile of chips – and then, in a flurry of farewells, I was on my way…
It’s all been the greatest of fun, the greatest of musical pleasure. And, for heaven’s sake it seems they made … a profit! Are Festivals supposed to do that?
Do you know, I have a little feeling that I may just have to come back here again same time next year…
Posted by GEROLSTEIN at 3:51 AM