An Evening with Lord Nelson

After gorging myself on orchestral music through the Liberation Festival, it felt strange, at the end, to return to my accustomed rather unorchestral world. But last night I grabbed the chance for just one more bit of Jersey music: a concert given at the Methodist Centre by the Jersey Chamber Orchestra and the Jersey Festival Choir, conductor: David Lawrence… and, do you know, in some ways I enjoyed this one the most of all.
It doesn’t take much analysis to work out why. Firstly, the two main pieces on the programme were vocal ones – and of course vocal music is where I come from – and secondly, like the soprano-in-the-marquee concert, it was held in a room rather than in a theatre or concert hall. And, as I’ve already said, I like that. I like being in there amongst or shoulder-to-shoulder with the music, rather than listening down on it from afar. 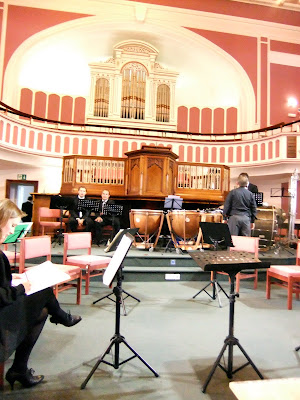 It was a grand programme too. As an hors d’oeuvre the pretty Elgar Serenade for Strings which everyone should know and I sort of didn’t. Then a modern piece: a cantata ‘A Great and Glorious Victory’ by Jonathan Willcocks, based on Nelson’s Victory at Trafalgar and the storm that followed it. I am wary of most of what is called ‘modern’ music. I find it simply unapproachable. But this was anything but. This would have to appeal to anyone. Ringing melody, pounding timpani and cymbals, soaring fiddles, a battle and a storm and a requiem, a choir alternately booming and calm and a splendidly dramatic tenor soloist (Neil Jenkins) to sing ‘Thank God I have done my duty’. Jolly good stuff and highly entertaining. It even has a singalong and .. yes, I did. Quietly.
The second half was what I had really come to hear. Haydn’s so-called Nelson Mass (which actually has nothing to do with Nelson) comes occasionally into my Victorian Vocalists book, so I was keen to hear it.
It, too, was enjoyable. It is strange. When Rossini’s Stabat Mater (one of my favourites) came out it was criticised for being insufficiently devotional and too theatrical, but here, in this earlier piece, I didn’t find anything of the devotional – except of course the text of the mass – either. Although Haydn is, of course, less theatrical than Rossini. And he doesn’t lean on his soloists, there are no ‘arias’ here, the solo voices are never on show for a stretch. And that, actually, leads me to my only complaint of the night. Soloists and choir, got up, sat down, got up, sat down, so often I got giddy. And almost wanted to laugh. But everyone sang well, and the piece is decidedly attractive ..
The eveing did, however, finish with a little humorous note. Haydn’s Mass came to an unshowy end and .. nothing .. the conductor had to hiss ‘that’s it’ to us in the front rows to start the applause. I suppose we should have known from the words, but the choir had sung ‘Amen’ so much during the course of the evening, I guess we were taking nothing for granted!
So, another super evening of music on the isle of Jersey, and a small surprise. It wasn’t the piece I’d come to hear that I enjoyed the most, but for heaven’s sake a piece of 21st century music!
Posted by GEROLSTEIN at 3:40 AM