The most beautiful, sun-sodden day. And that cold breeze that has haunted us the past weeks all packed away, hopefully for the season.
It was not a day to be ‘resting’, and Gorey was advertising a ‘Fête de la mer’. Well, any excuse to visit Gorey is a good one, especially in the sun, so down to Liberation bus station I toddled and joined the queues waiting for the number one bus. Such queues, that when the bus came it was not able nearly to take us all. 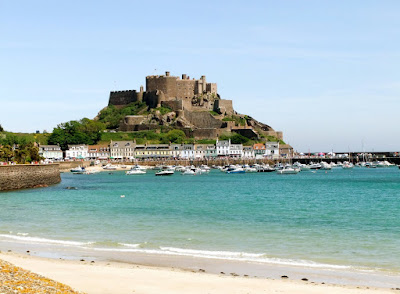 Soon after midday I arrived on Gorey pier, and to be sure the town was ‘en fête’. The quay was lined with stalls, thronged with people, and there were my ‘old friends’, Premier Brass, tootling their stuff merrily on the bandstand. 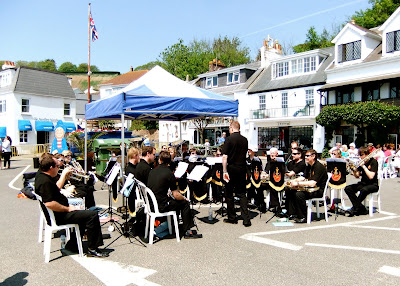 Down the quay I wandered, casseroling under the sunshine, past the food vendors – seafood, thus the title ‘fête de la mer’ -- and the odd tent selling knick-knacks and face-painting, feeling decidedly at peace with the world. Truthfully, the seafood didn’t look extraordinarily wonderful to this sea-foodie New Zealander, although I was distinctly tempted by some evidently fresh-caught mackerel being expertly manipulated by one young man 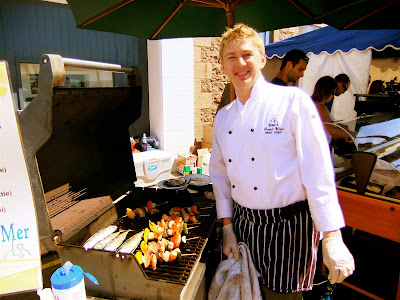 However, in the end sentiment got the better of me. The very last stall on the pier advertised ‘moules frits’ and memories of Lille, of Jean-Baptiste and Didier and Ali glid into my head … so much so that I spoke to the stall-holder in French. He looked at me from blank Portuguese eyes and I thought, oh Kurt! Anyone who advertises ‘Fete de mer’ and ‘moules frits’ evidently isn’t kosher French!
But the ‘frits’ were bonnes, and the moules – those little sweetish ones that are so unlike the huge juicy Marlborough mussel .. were pretty good too, and a pint of icy Stella was the perfect complement. And the spot … nestled under Mont Orgeuil looking back at the gaiety of the Festival with Premier Brass (until, alas, they were replaced by bongo drums) singing in the distance, was splendid. 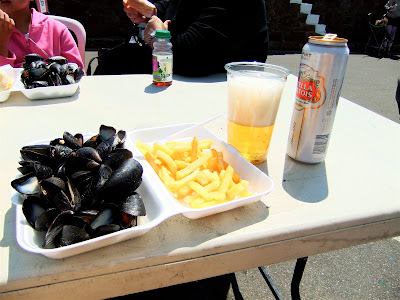 I took a little wander through pretty Gorey Village and then joined up with Charlotte and Jennie, and their friends Tom (87 years old and with tales to tell of faraway places and the war), Tara and Chris at a table by the square (now featuring morris dancers!) …
A couple more pints slipped down easily, my freshly re-juvenated number one haircut sizzled ... and then, all too soon, it was time to head for that enormous bus queue again. 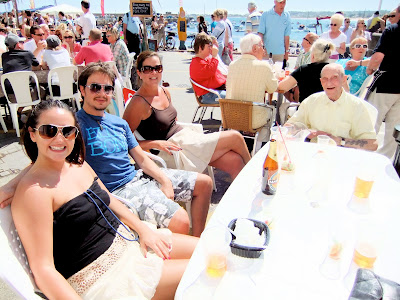 There may not be much to it, this Festival of the Sea, but on a day like today, with sunshine and friends at the party, there can’t have been very many better places in the empire to be than on Gorey pier.
Posted by GEROLSTEIN at 10:25 AM