.
Tonight was the big concert at the Opera House: the Jersey Chamber Orchestra and soloists in two concerti and the Elgar Introduction and Allegro for Strings.
So, given that I’m inclined the spread my writings rather largely, a screed on the happy event might here have been foreseeable. But, strangely enough, in spite of a thoroughly enjoyable musical night, I haven’t got a screed to write.
There’s no way I’m going to comment on the pieces themselves, except to say that I didn’t find the Elgar as effective as I had expected it to be (which may very well be my fault), and that having not read the programme properly, the Mendelssohn didn’t turn out to be the one I know and was waiting for.
The soloists were, with one exception, the same as last night’s – the Fab Four – and everything I thought last night I thought again tonight, and in spades.
Yes, it was great to see the Two Most Beautiful Violinists in the World (OK, Nicky was announced as ‘the’, but I have my little weaknesses .. chuckle.. sorry Sacha!) giving their rendition of the familiar Bach double concerto. Yes, I did enjoy very much Sacha and Qian’s performance of the Mendelssohn (for violin, piano and strings in D Minor) that wasn’t the one I’d expected but with which it was good to make acquaintance. But I’d had my delighted ‘discovery’ of all the players concerned on the previous night, and that joy and excitement of seeing and hearing something new and terrific doesn't and can't happen the second time around.
The one additional soloist was the viola-player – the replacement for the lost Chinese man. Somehow, at incredibly short notice, the management succeeded in getting the principal violist of the LSO to fill the gap, and the viola passages of the Elgar were duly played most beautifully.
As for the orchestra – a mixture of local players and some imported for the occasion – under the baton of Daniel Cohen .. they simply did everything they should have done, and nothing they shouldn’t have, and added their considerable bit to a wholly enjoyable evening.

Having had my say on the subject of the Fab Four’s publicity photos, I did put my trusty Fuji in my pocket when I headed for the theatre, and I cornered Nicky and Leonard amongst the champagne glasses at half time. Look. If I can happy snap these hugely photogenic young people looking as good and natural as this, what can a professional do? I rest my case. 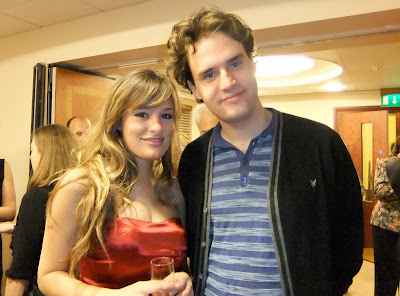 I had just finished my nightcap, in the company of the Katie the viola player, and was heading out into the night and the city square, when I saw the stars of the show preparing their van for departure, and realised that my collection of photos had a notable hole in it. No snap of Sacha. So I hurtled across, Fuji aflying …
The resultant ‘team photo’ will, I am sure, be among my happiest souvenirs of the Jersey Liberation Music Festival 2010. 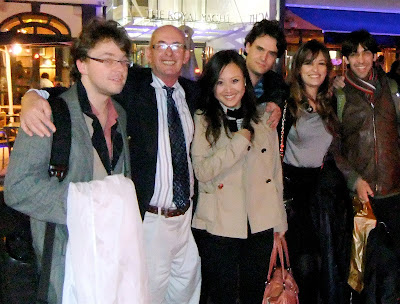 Posted by GEROLSTEIN at 3:56 AM