Back on with the boots

One thing about flying to Europe, rather than taking my old trips by ship, is that I miss out on all those walks I used to do in the Pacific islands. 10, 20, even 30 km stints in my inimitable flat-out style and in my inimitable (who would want to imitate it?) headscarf-and-short-shorts attire.
You can’t really do that in Berlin and, well, the alternative entertainment in Jersey this year has just meant more cars and buses and much less walking. Yesterday, however, with life having calmed a bit and the sun being even a bit too aggressively out, seemed like a good moment to get back into gear. So, off I went.
One way and another, I’ve seen a good deal of the Isle of Jersey in three visits here, and even though much of it bears re-visiting, I fancied something new. So, on Geoff of Bay View’s advice, I took a bus to St Brelade. Goodness, I am glad I did. Because St Brelade is delightful. It reminded me of the South of France – in the days when the South of France was delicious and not a concrete excuse for the Playa del Whatsit. And the beach! 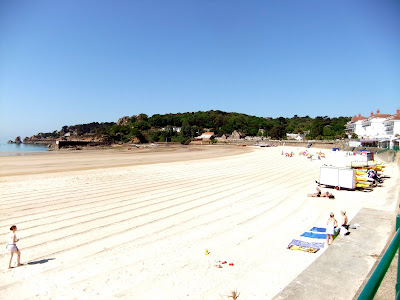 After the beaches I had seen on the way to Gorey (not great) and that at St Aubin (OK), the beach at St Brelade was a New Zealander’s joy: beautiful expansive beige sands, clean and groomed, with just a little of the traditional British seaside paraphernalia, rimmed by wonderfully kept gardens… I could only wonder why this wasn’t one of Europe’s Rich Spots. But it isn’t : the clientele seems to be more Blackpool (and aged) than Monte Carlo ... well, good for them, I say, and if I lived in England I would much rather come here than fly off to the Playa del Anything. The natural advantages are grand and only the fact of the road running right in front of the beach and gardens distracts from its glamour. 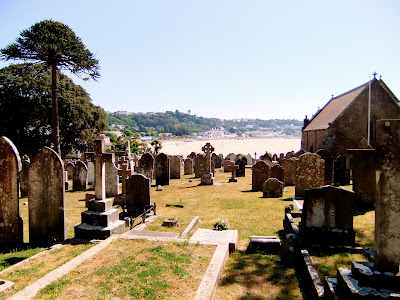 I strolled up to the ancient church for a panoramic view, tried a ‘path to something Bay’ and was met by a PRIVATE ROAD sign, so instead I strolled along the seafront to Ouaisné and its Smuggler’s Inn (where I lunched with Ann-Marie two years ago), and thence to the sweeping bay of St Aubin, and finally after a couple of hours under the beating sun, back to St Helier, a very cold shower and two litres of milk.
An excellent and charming pipe-opener.
Just how much my pipes were to be opened, I did not know.
Flushed with my first day’s success, this morning I got more adventurous and, again following Geoff’s advice, headed for the number four bus to the north of the island and its cliff top paths. 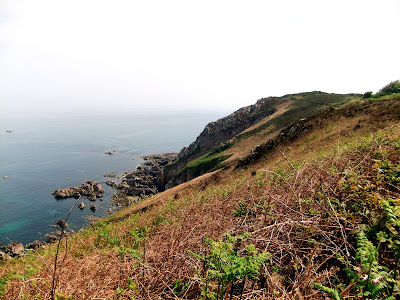 A sign saying Wolf’s Caves dragged me along a small road to ... no caves, but a derelict tearoom and several disappointed British tourists who’d fallen into the same trap of nomenclature. But a sign said ‘cliff track to Belle Nuit’ which seemed suitably surreal, so off I strode. It’s actually a little hard to stride on cliff tracks, but this one was well-made, well-kept and, before too long, the little bay of Belle Nuit hove to. I popped into its café for an excellent cheese and pickle sandwich and iced ginger beer, and thought, this is great, I’ll do some more. 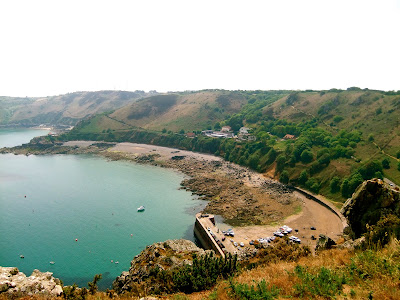 It was a decision which was to be heavy with consequences.

I knew the next bit of cliff-top, ending at Bouley Bay, would be longer .. and some folk I met told me it was ‘pretty up and down’ if one took the upper and obviously more scenic track. But, hey, I’ve climbed and tramped all sorts in my life ... so off I set. ‘Up and down’ was putting it mildly, and the underfoot was less good than the first tranche, but what riled me, gently at first and then progressively more sternly, was the lack of signposting. When you get to a fork in the track, and there are two or more possible choices, you need to be told which way is which. No such luck. And this not once but dozens of times. And, finally, I took a wrong turning, and got utterly benighted amongst the tall trees.
Come on Jersey. It’s not difficult! You don’t need posh signs. A blaze on a tree, a few red-painted tin-lids, two sticks and a bit of string to stop the walker climbing 400m to end in a farmer’s field… any old tramper can tell you. These are advertised walks, and there were some fairly elderly people walking them: if they ended up taking the same wrong turning as I, you could have a dead body on your hands. In my case, you had a very grumpy, chest-pained and sore-footed one.
Finally, after an hour of wandering, I orientated on a chimney which became a house which became a track which became a road which had a bus stop. But a which-way bus stop? Back to St Helier or on into utter wilderness?
Well, a nice Bulgarian man walked by and led me a couple of kilometres to the only bus stop he knew which led to town, and he left me there to await a reasonably imminent bus. He was walking the stretch: he was going for a job and hadn’t the money for the bus. He was right, for the bus never came. Commex buses of Jersey: you SUCK! Finally, I gave up and hurtled down the hill in a now totally black mood. Jersey had finally let me down, and with a wallop. Anger gave me fleetness of foot, and I caught up the 20 minute handicap on my amazed pal just before St Helier … we shook hands goodbye in the familiar purlieus of Rouge Bouillon (and yes, I made sure he had the bus fare home .. just in case a bus decided to run) and I stormed back to Bay View, a shower, a footbath, the usual litres of milk and a crash-out, promising I would NOT write this blog till I had calmed down, and had my dinner..

So I am now back from ‘The Olive Branch’ -- of which more anon -- after ravioli and a little iced white wine .. and I am calm, yes, I am quite, quite calm, thank you. And I will not write to the council and the bus company and the St Helier newspapers until tomorrow.
Of course, they may read this..
Now, where shall I go tomorrow that do’n’t need a bloody number four bus…
Posted by GEROLSTEIN at 1:27 PM