Back to the races!

Well, there are some similarities (notably, the horses involved) but there are also big differences. To start with, Jersey Racecourse is a permanent affair, not a modified golf-course, and it has some permanent facilities. As I grumbled last year, however, it doesn’t have even a smidgin of a grandstand (apparently local planning refuses a building on this ‘rural’ site!), and the only sheltered, seated area is the Members’ Marquee. 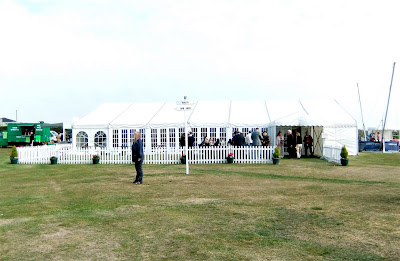 The answer? Become a member for the day! Courtesy of Charlotte, the club secretary, that is exactly what I did, and as a result enjoyed a first-class buffet luncheon (one of the best I’ve ever had on a racetrack) sprinkled with a little rosé wine, and mingled with interpolated sorties to the Green Hill beside the race-track to take in the five races on the programme.
The races today were a bit more substantial than at Guernsey, the club having succeeded in putting together some 7 and 8 horse fields, but what was amazing was the number of extremely close finishes. Since the stock of horses here is limited, animals of various ages, experience and talent have to line up together, and the handicapping is consequently wide. It is also first-class, as the close finishes proved. And then I discover that said handicapping is done by a gentleman in … Nigeria!

What was the same was the weather. As in Guernsey, we started very cold-windily, and boy! up on those cliffs the wind can really whiffle, but as the day progressed the sun elbowed its way through the clouds and leaving the comfort of the Marquee became less of an arctic experience..

The highpoint of the day? The company! Charlotte’s mother, Jennie, brought me to the racetrack and I lunched with her and her circle of close friends. I felt quite swell there, in my collar and tie, sharing a table with six of the loveliest ladies you could hope to meet on a world trip. Thanks so much, ladies, it was grand! 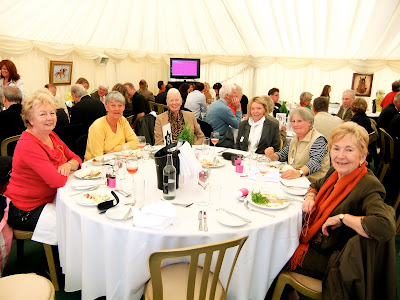 The lowpoint of the day. Greek Theatre. No, I don’t mean al fresco drama .. though that’s what it was. It is a horse. A horse which should not be allowed on a racetrack. It had to be walked to the start, and whilst the other runners waited, its jockey attempted to mount and was several times tipped off and out. When finally the severely delayed start was given, the beast again threw its rider, turned tail, raced back to the birdcage, messily hurdled the rails and ran for its box. It was a disgraceful display. I hope the trainer is roundly berated or worse, and the horse banned. Racing can’t afford episodes like that. One of my ladies was quite upset.

But even Greek Theatre and the wind couldn’t spoil a really splendid day, and it was very contentedly that I curled up in the back of Jennie’s car to return, at the end of affairs, to the Bay View .. in the company of another new friend. This is Bailey who sweetly dribbled down the back of my neck all the way to home and a Very Early Night. 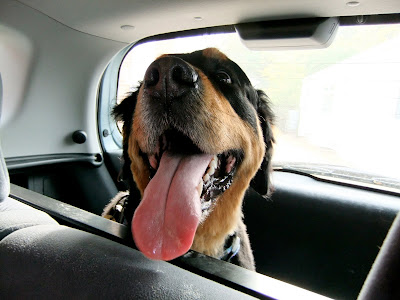