Jersey, or a Quiet Day With a Book

.
I didn’t want to leave Berlin. I didn’t. It was like tearing a babe from its mother’s breast…
Closing up number 32 and saying goodbye to everyone … I was miserable.
But my travel and my Jersey B&B were booked, and – let’s face it -- the pace I’d been running to in Berlin had been pretty hot, and a few quiet days in the Channel Islands sun with a book seemed a salutary thought.
But it didn’t quite turn out that way. 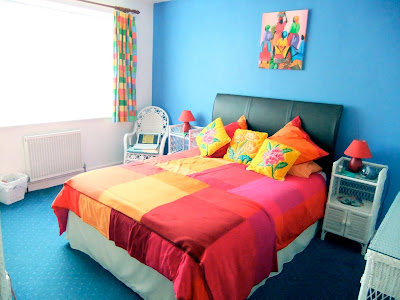 Installed in my room at the fondly-remembered Bayview, I took a quiet wander around the streets of St Helier, picked up leaflets on What’s On, and started to sketch my gentle ‘entertainment’ plans for my time here. The races! I remembered rather fondly the races from my last visit, but .. oh! no grandstand, no place to sit. I can’t do that. So I fired off a small message to the Club to ask if things sedentary had improved..
And thus I met Charlotte, the club secretary, and ended up with an invitation to join her and a group of her friends on a trip to the morrow’s races across the water in Guernsey. Guernsey, of which I had decreed on my last visit that 'nothing became it like the leaving of it'!
And so, come 10.15, a smart silver car driven by a tall, young and glamorous lady (why does one expect a ‘secretary’ to be grey, small, ageing and bespectacled) pulled up outside my door, and off we set. Well, ‘off we set’ is a small exaggeration. As we stopped to pick up Paul and Maia, others of our company, somehow the car shut and firmly locked its doors: 20 minutes was spent while Paul did intricate things with a pair of coathangers (where, I wonder, did he learn that) but finally the cavalry and the spare keys had to be called for. This was clearly going to be no ordinary day! 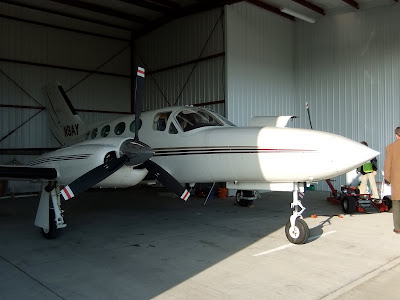 There is of course, water between Jersey and Guernsey and we crossed it by plane. A number of Charlottte’s friends are seriously into aeroplanes, and so we cruised across the waters in Paul Rennie’s droolworthy cream-and-gold lined Cessna ‘Golden Eagle’. Daddy, buy me that...?
From the airport to the racetrack is some distance, and from our taxi I was able to see the part of Guernsey that I had not seen on my gloomy first visit. And it is enchanting. Pure olde Englishe countryside, lanes and stonewalls, charming old houses and plenty of green. Never judge an isle by its towns is, I guess, a fair adage! Guernsey, you are redeemed. 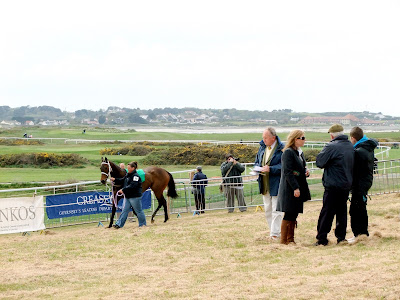 Guernsey racecourse actually isn’t a racecourse, it’s a golf course. But, for one day in the year, the club gets out its running rails (purchased, would you believe it, second-hand from Ascot!), and constructs a curiously-shaped one mile track around and through the greens and fairways and bunkers and flourishing gorse. They have a splendid commentator, who explains for the benefit of the horsey-uninitiated what everything is, how to bet and so forth .. Actually, how to bet was an eye-opener. Never, ever, on any race course in the world, have I seen long queues waiting to bet with a bookie! But bet everyone did. Even on 3 and 4 horse races! And there must have been nearly 3000 folk there .. 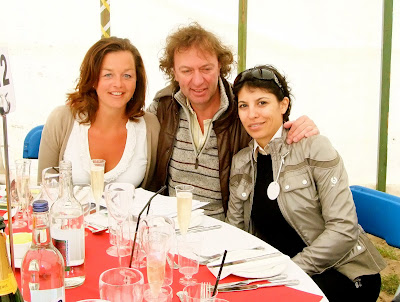 We lunched – twelve of us, and deliciously convivial -- in a thronged marquee, on Pimms and champagne and seafood, we watched the horses – local, British and even one French (which, of course, won) -- parade and run the five races on the card. In spite of tiny fields there were some close finishes including one dead-heat which I’m convinced wasn’t, but… well, mod cons like an up-to-date photofinish aren’t part of the game here! And it meant that more of the merry crowd got a ‘collect’, so what the heck… 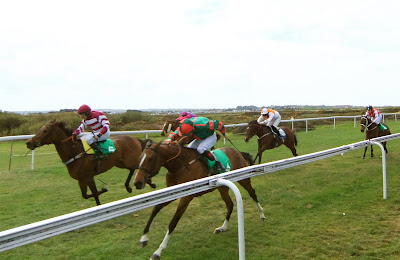 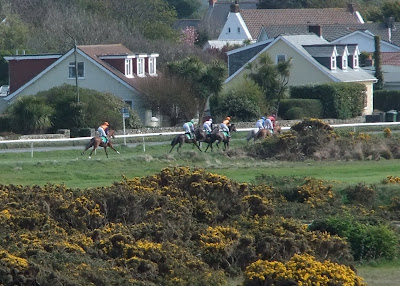 And then it was time to head back to the airport, back across the water and .. home? Oh no. On to the Boathouse at St Aubin for more jollity and more wine, and an encounter with the beautiful young singer-songwriter, Vicky Fallon O’Neill and her mentors.. 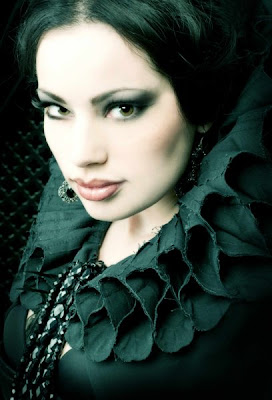 thence, to one of the island’s beautiful homes to listen to Vicky’s new demo .. and still the wine flowed on ..
It was nearly midnight when I wobbled, rather the worse for wear, into the Bayview.. my ‘quiet day in the sun with a book’ ended.
It was a truly grand day, with truly grand people …
But today I really must do the sun and book thing. Actually, I don’t think I’d be up to anything more strenuous!
Posted by GEROLSTEIN at 3:18 AM