My discontent has melted like an iceblock in a glass of whisky..
Even though I am quite sure that a number 18 commex baby blue bus purposely tried to crush me against a wall this morning, I am – as of lunchtime -- in a forgiving and expansive mood towards even them.
Now, I realise that in the month I’ve been in Jersey I have really written very little about food. Give or take my panegyric on ‘Relish’. This doesn’t mean I have been picnicking in my room at Bay View every night, far from it, but …
Well, the truth of it is that, as soon as I got here, I headed straight back to the neighbouring Roseville Bistro, which I had patronised nights on end last time round, and threw myself back into dining on their crab cakes, scallops, chowder and sea bass. This punctuated by my Festival nights on steak sarnies at the Royal Yacht Hotel.
But then I was shaken out of my unadventurous regime. One night I had a Roseville crab cake that was decidedly ‘yesterdayish’ in feel, and then my friend Ann-Marie took me out to dinner at The Green Olive, where I partook of a nicely adventurous sea-bass dish with curry, and realised that hey! with my time here rapidly shrinking, I really ought to be getting out and about a bit more in Jersey resto-land. 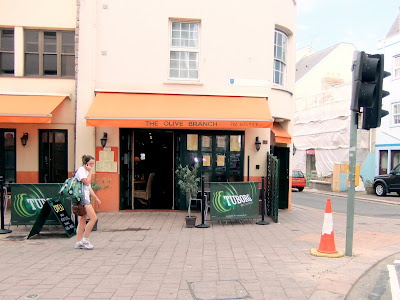 So I started. First of all, my new guide and mentor, Alex-the-violin, and I headed off to The Olive Branch, a decidedly superior Italian restaurant within walking distance of my base. I had a really good petto di pollo with peppers and asparagus, plus (quite a lot of) a tasty Saint-Emilion ‘05 ... and I thought: I can do with more of this. So I have now been back thrice more, and sampled a very cheerful seafood spaghetti, nice pink chicken livers and, best of all, some grand ravioli. To the chef’s horror, I asked for these without the proposed coating of tomato sauce .. ‘but they will not taste of anything!’ he cried, so I allowed the (very nice) sauce on the side. But I was right: of course the ravioli taste of something .. ricotta, spinaci .. and just a little dab of sauce (rather than a drench) finishes it off nicely!

Alex, I decided, was obviously to be trusted on ‘restaurants to Kurt’s taste’, so I suggested another outing, and thus – on his advice -- we ended up today lunching at Bohemia. Now I am often wary of ‘the best restaurant in town’ (for thus is Bohemia generally described here) and for that reason – and its rather forbidding exterior -- I hadn’t ventured there before. What an ass I have been. WHAT an ass! I am just back from The Best Lunch I Have Eaten in Yonks. 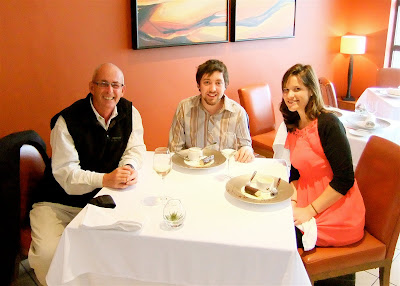 To start with, the company was tops: Alex-the-violin and Katie-the-viola (I did rather feel I ought to have a ‘cello) are great table-mates. Which is, as you know, a special skill. And then came the menu..
Well, my knees jellied the moment I saw the first item: scallops and sweetbreads with .. oh heck, I forget what else was in there .. some kind of delicious pea, and honey-in-the-comb … anyway, we all ordered this evident taste treat, and I photographed it before delicately destroying it. 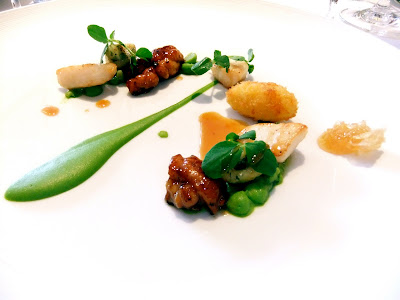 It was (accompanied by a glass of chilled white Burgundy .. premier cru, of necessity) quite a sensational taste treat. I adore sweetbreads, and to have them light and crisp and somehow .. ‘concentrated’ ... instead of muffled in a sauce or gravy .. ah!

For the next course, it was a choice between ‘roasted local maize-fed chicken’ and fish. Katie went chicken, Alex went fish .. and finally (on the waiter’s advice) I did too.. What can I say? it turned out to be quite as photographable as the entrée.. and equally as good! Oh why doesn’t everyone trust in coriander…? And coconut! And… but enough. Feast your eyes… and envy! 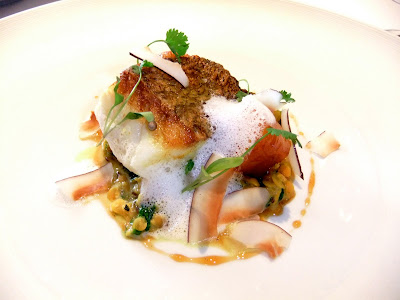 I should add that between and before these two dishes, we were served with some totally delightful friandises: delicate nibbles of cheese and pastry, a tiny toasty dip, a marvel made from Pimms and spun-yoghurt, and, before desert (the others had a zingy lemon soufflé with a very special rouleau of coffee ice-cream .. and I pinched a little), we were given a most delicious melange of mandarin ... goodness, words fail me. But my famously small appetite didn’t for a second!

As you will understand, Bohemia is not a place you go when you are simply hungry. It’s a place you go when you want to experience food. A joy of life to which I’ve treated myself too little since St Paul de Vence days.
And since, under the general effect of the whole meal, I’ve forgotten far too many of the details of the eye-boggling and stomach-seducing menu, there’s only one thing to do. Yes, I’ve booked in for a return lunch tomorrow… because I’m pretty sure it will be a goodly while before I find another restaurant, another meal, as good as today’s… and, after my too-long ‘retirement’ and my slow Jersey start, I intend to make up for lost time.

Chapter Two. Alex and I went back. And this time we threw everything to the winds .. especially the set luncheon menu .. and we dined a la carte with all the trimmings -- muscadet and French champagne .. through the longest and loveliest lunch I can remember eating in centuries. Four hours of it. I couldn't resist repeating the scallop and sweetbread starter, then daringly (for a New Zealander), whilst Alex went for turbot and veal, ordered Welsh lamb. It was a revelation, the choice part of four different cuts .. and hooray! those peas and sweetbreads as accompaniment (the chef must have been blogdropping) along with sweet baby Jersey potatoes. For dessert we chose a shared 'little bit of everything' on the menu: so there were yesterday's soufflé and ice-cream in chocolate, along with something delicious of white chocolate and ice-cream, the lightest sliver of carrot cake you can imagine, a black chocolate slice with pistache and .. to finish the chef's celebrated treacle tart. It was so light I'm sure it could have floated off the table. It was a foodie top treat ... thank you 'Bohemia', you have put the icing (or should I say the treacle tart?) on my grand time in Jersey...
Posted by GEROLSTEIN at 11:29 AM