Guernsey: the Valpieds and the Le Roys ...

Guernsey. The real one, in the Channel Islands. Les îles anglaises de Normandie. I used to visit Jersey annually when my little nest-egg lived there, and I twice ventured to Guernsey .. the first time for a peek in 2008

And a couple of years later ... by private plane from Jersey ... for a day at the races. On the golf-course!

So when I saw a particularly charming Guernsical family photo on ebay, I was tempted to inevstigate. 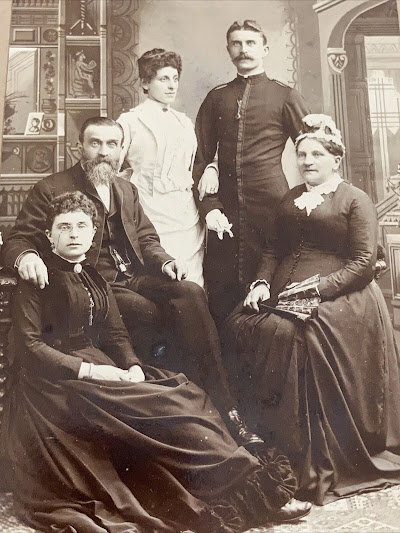 Yes, its mother, father, daughter, son and daughter in law.

Father is Pierre/Peter VALPIED (b 15 St George Street, St Peter Port 1834; d St Peter Port after 1911), son of another Pierre/Peter Valpied, journeyman plasterer) and his wife, Anne née [Le] Gallez. He was apprenticed, young, to an ironmonger, but at some stage gave up mongering, and set himself up in the drapery and shopkeeping business in partnership with Mr Thomas Grut ... Mr Grut named a son Walter Valpied Grut in 1866. He diversified for several years into photography. However, it doesn't seem to have been a very enduring partnership, and 1873 seems to have marked its end. For the rest of his life, Peter worked as a 'general shopman' and 'draper's assistant'.

Mr Grut seems to have done better out of it. He, too, seemingly took up photography, with the assistance of Mrs Valpied, here pictured ... and his son Mr Thomas Alfred Grut thereafter became one of the island's most notable photographers. 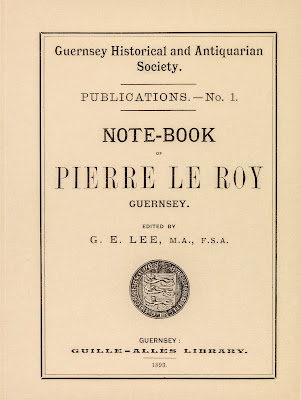 Arthur Thomas VALPIED (b St Peter Port, 21 October 1863; d Falmouth c1910) looks a particularly fine young man. I wonder what he is wearing. It looks like a dressing gown. With affectations of the military. Well, Arthur was connected to the military. He spent time in the East and in Egypt ... but he wasn't a soldier. He was a military schoolmaster. Whatever that means. Anyway, before the age of 40 he was dubbed a Chelsea Pensioner (I think) and went to teach school in Falmouth. He appears there in 1909 and I see him not again. What a waste of a ferocious moustache.
His wife, on his arm here, is Annie Maria (née WATTEZ). Handsome couple. She survived her husband, but soon after his death was immured in the Plymouth Borough lunatic asylum where she died, aged 59, 12 July 1924. I think they had three children .. one died as an infant, in India. Another, Irene, was born in Cairo ... their only son, and eldest child was apparently Roland Horace Le Roy Valpied (1889-1964)
And, lastly, Agnes Lucy VALPIED (b St Peter's Port 17 August 1866; d 14 Friern Barnet Lane, 1959). Variously 'draper', 'landowner' ..    Well, Agnes seems to have stayed with father in Guernsey up to his death. I see in the 1911 census they are housing a 19-year-old Irene who, I assume, is Arthur's child. Poor Annie is down in Falmouth, immured in her asylum . She latterly moved to England where she lived to the age of 93.
So. Can we date this photo?  Sort of. Arthur and Annie married in 1888. Lucie died in 1898. So, between those dates.
Well, we have a little help. The same vendor "laureswan" has a dozen more Guernsey pictures. Yes, another family collection (I would guess Agnes's) being broken up. And some of them are labelled, though latterly and with a few wrong spellings.
First, Lucie again ... 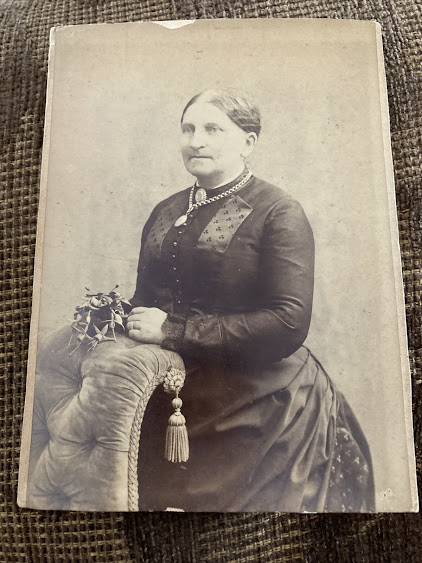 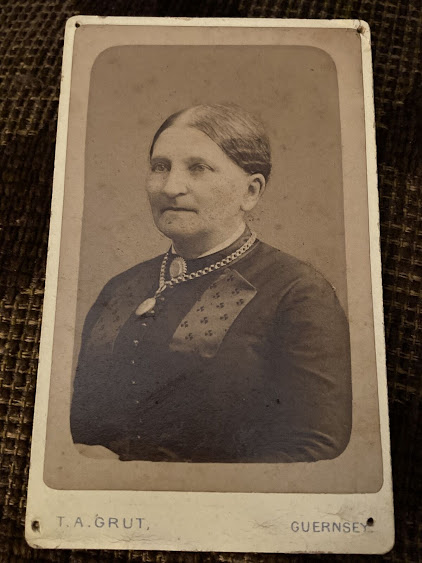 Then her sister, Caroline Carteret Le Roy (b le Câtel 4 March 1821; d ?1908). Caroline did not marry, lived to 87, and at various times lived with varying other members of the family, latterly niece Matilda ... 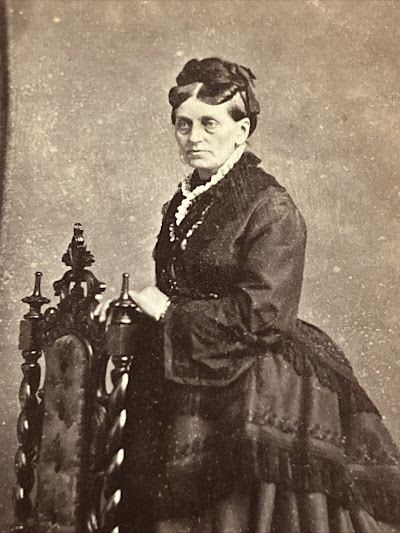 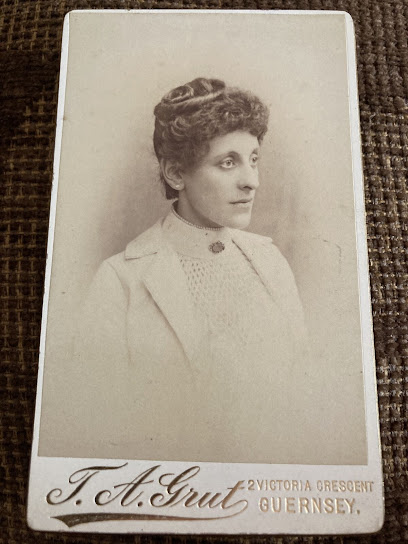 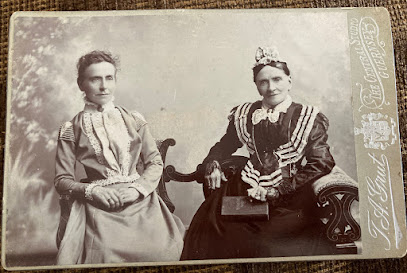 Rest the bodies of

of the above JEAN BLONDEL

widow of the above

So, yes, Marie Le Roy was the mother and grandmother of these ladies. And, yes, she was a daughter of Thomas Le Roy (1786-1842), farmer, and his wife Marie de la Mare (1760-1841), who were the maternal grandparents of our Lucie, above. Marie Le Roy married Jean Blondel (1806-1842), and seems to have given birth to our Mary Blondel (b Le Bouillon, 27 March 1828; d La Gibauderie, St Peter Port 25 February 1912). Mary married (1851) Frederick William Guérin (or de Guérin, particles come and go) had a son FredericBlondel Guérin, and daughter Ada, who remained unmarried, lived with her mother till her death at 83, and then solo till 22 April 1935. Phew. After Guérin's death, Mary married (1867) ship's master Edwin Trannack (d St Peter Port, 12 March 1891). So, 'Grandma Leroy' doesn't mean Lucie, it means her mother, Rachel. All this intermarriage!
Alas, the next two photos ar'n't labelled, but I have no doubt that they belong somewhere in the family .. 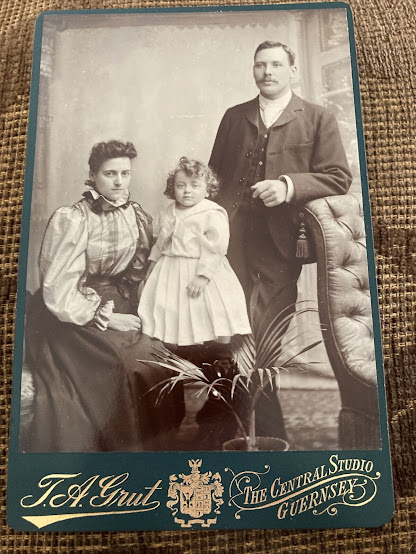 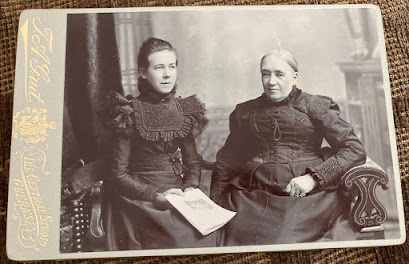 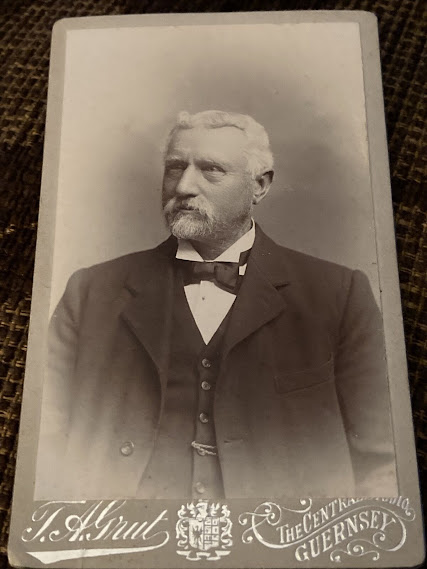 1900. Agnes would have been 34 and living at 'Dulce Domum' in the Belmont Road with her widowed father. So, who is Edmund?  Well, he is Edmund Le Couteur (b St Pierre de Bois 10 January 1845-1901) and he married, yes, Marie Lucie Le Roy, daughter of our Lucies eldest brother, Nicolas. I'm sorry, but the convolvulations of the family are endless ... Oh, he was a fish merchant and grape-grower at Rocquaine. 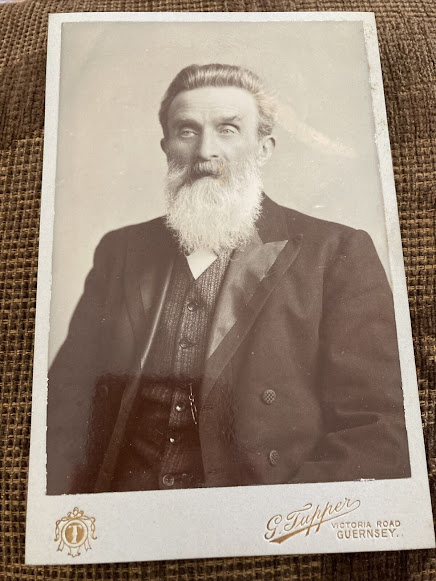 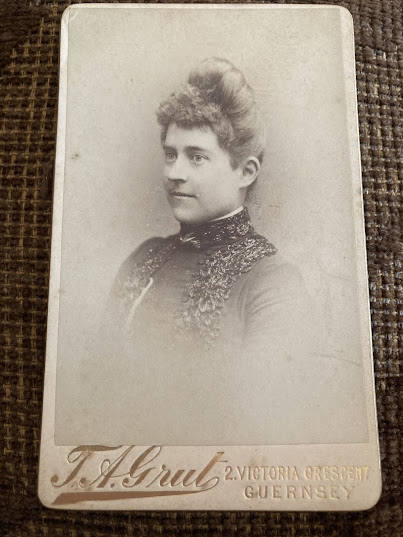 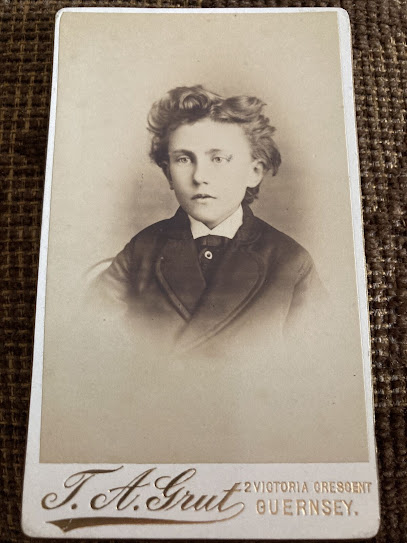 Sigh ...
I'm pretty sure that Agnes Valpied was the owner of these snaps. Some time after her father's death, she left the island. In 1939 she can be seen 'incapacitated' at Rambler's Lane, Slough'; at her death, twenty years later she is at Friern Barnet ..
Well, there must be plenty of descendants of the Le Roys around. But where? The boys, like many islanders, took to the sea ... Nicholas became a civic worthy and bred, as we have seen; Alfred ended up as a child-prolific miner in Australia ... Matilda married Thomas Stephen de la Mare (d 1900), nearly half-a-century the Castel postman ... 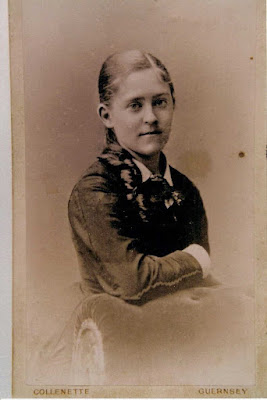 The family historians have Caroline and Charlotte dying on the same day ... very confusing. Anyway, at least we have some of them in order, and some faces to fit ...
Posted by GEROLSTEIN at 10:50 PM

Wonderful read and great photographs thank you. 😊. I’m descended from John Le Roy (1831-1911) who was one of Lucie’s siblings.

Hurrah! That's what I always hope for when I post these other-people's-family articles! The photos are all for sale on ebay right now if you want them! Best wishes Kurt

Your dedicated detective historian approach is to be commended greatly. We see so many family archives broken up on the likes of sellers on Ebay. Such a shame.

Thanks so much for posting - Arthur Thomas VALPIED is my Great Grandfather, Roland Horace Le Roy my Grandfather who I was named after -> Roland Davies and the name continues on with my grandson Cheers