Henry Belcher: Off to Bangalore and Allahabad!

I had my day's doings all worked out. But when my morning cruise through the Bay of E turned up this dinky wee fellow, with all sorts of stuff inscribed on his back, I had to investigate ... 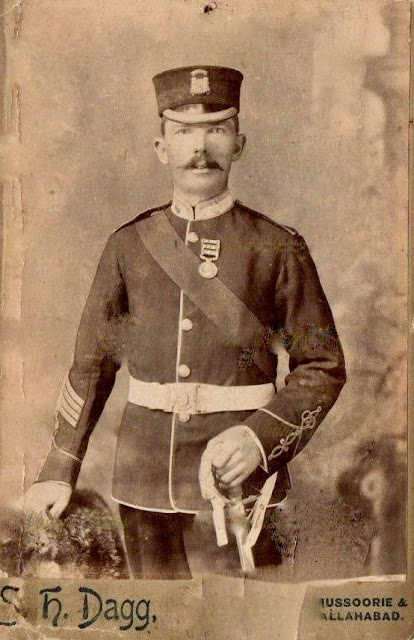 Then the information. Amazing! A birth date. But no place. Information from 1898, when the 'First Battalion' (which one?) moved to Allahabad (from where?), and when they moved on from Allahabad to .. where? ... in 1900, dates on which Henry BELCHER was made a Captain, then a quartermaster .. when he went on half-pay (why?) and when he was retired ..

Surely with so much information, this should be easy. But it wasn't. I've been juggling Belchers for four hours, and I reckon I've finally got him ... so here goes.

The birthdate. 19 December 1864. But where? OH! There's one born in Thatcham and christened on 18 December! Red herring. There's only one Henry Belcher born in England in the right quarter, and that was in Wantage. But, look there's Colonel Belcher, quartermaster, getting wounded in the Indian Mutiny! Father? Was he born in India? No. And no. But you have to eliminate these pink goldfish. I returned to the Wantage chappie. I should never have left him. He's our man. But the family historians have mixed him up with a Henry Charles Belcher born some half a year later.

Henry Belcher was indeed born on 19 December 1864. And in the Wantage area. To be precise, at Neville's Farm, in the village of West Lockinge. He was the son of Henry Belcher (1814-1887), a farm labourer/farm servant/cowman from Wiltshire and his wife, Clara née Taylor .. well, I should say 'a son'. Because Clara did as much labouring as Henry, producing Jane, John, Ann, Elizabeth, William, Henry, Mary, Emma, Susannah, and Clara Jane before she cried enough in 1880. The boys did farm work, the girls worked in the dairy, and Henry went off to Dallington, in Northamptonshire, as a 'farming pupil'. I see him there in 1881. But apparently, if its the right Belcher, in 1885 he enlisted in the Royal Artillery. The soldier one went out to the 3rd Burmese War, where he stayed for four years. Which would mean the Hy Belcher back in Wantage's Mill Street 'leather cutter' would have to be the other one.

My next sighting of our man is in the 1891 census. He is now with the 1st Batallion (ahha!) of the Northamptonshire Regiment, currently at Aldershot. He is a sergeant ... and he has a wife. Emma. She's listed as being 25 and born in Market Deeping, Lincolnshire. Odd. But, well ... are  they the Charles and Emma who have a son, Charles Henry in 1 November 1892 in Bombay?

1894 he is in Bangalore, where I see him -- 'quartermaster' aged 29 ... what??? wait a moment ... but he's not a quartmaster yet ...is he?  The gazettes for 1900 say 'raised from the ranks ... Sergeant Henry Belcher to be quartermaster with the honorary rank of lieutenant'. I notice that the photo was taken 'prior to being made a QM'. But they don't say when that was. Odd. The other dates are so precise. 1895, I guess that's him being awarded the India Medal. Maybe that's what he's wearing in the photo, rather than the one he got (if it were he!) in Burma. (post scriptum David Lovell confirms that it is the India Medal :-) )
Oh, well. Next landmark the 1898 departure for Allahabad with 'the first Batallion'. Northamptonshire, I imagine. But they seem to have continued on to the Boer War in South Africa in October 1899. Our inscriber says they moved on 28 December 1900 and doesnt mention the Boer War. And just to muddle me more, Lieutenant Henry Belcher of Dagshai, Punjab, aged 38 joins up briefly with the Excelsior Lodge in that place in 1902!
1906. He (of the 1st Northamptonshire) is put on half-pay, because of ill health. Twenty years in India, who's surprised?  And then comes the gift that ties the whole puzzle together. An ill Indian army man doesn't stay in India. He heads for the salubrious climes of Australia or New Zealand, or those less salubrious but homely, of England. And there he is ... in the 1911 census ... in the Newark Rd, Swallowbeck, Lincs:  'Lieutenant, half pay', born Wantage, with wife Emma, born Market Deeping .. oh, it's him all right ... but Emma is now five years older than him, admits to no children, and claims they have been married ... two years? I refuse to believe that Henry married two Emmas from Deeping ... and no children? OK ... then who is the Indian-born Charles Henry Belcher, civil service clerk, who died in Uffington, Lincolnshire 10 May 1971? He had a son, Henry ... And in 1901, he is staying with the Marriott family in West Deeping 'nephew'. Did I mention that Emma's name was Marriott ... 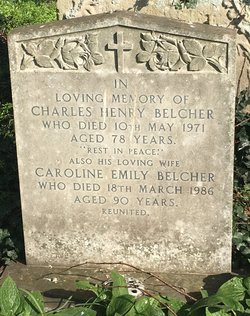 I see that Henry himself died in Newark in 1927. At least, I suppose he was the Henry who did.
And Emma ... ah! I see the problem. Mrs Emma Marriott née Reynolds, daughter of Edward (distillery labourer) and Elizabeth Reynolds of Market Deeping. That's why they were only married in 1909. A previous encumbrance! William Marriott, son of Thomas Marriott, married Emma Reynolds 14 January 1879 ...  that's enough puzzling for one day. The sun has crept back into its cradle ... time to spruce up for dinner ...
But I wonder what became of Henry, son of Charles Henry, son of Henry and Emma, born 5 November 1926  ..