James William Turner (tenor) was one of the elect hundred Victorian Vocalists who made it into my book of that name. He had a long career as a performer and an impresario, but it was a career which has decidedly unusual beginnings -- in the orient, in Australia, in San Francisco -- before, in 1869, he got underway back home in England.

Over the five years that followed, he sang in all sorts of places, from the Oxford Music Hall and the Dublin Theatre of Varieties to St James's Hall and St George's Hall, to the curious company mastermindlessed by Thomas Thorpe Pede RAM at the Alexandra, with a sometimes slightly odd mixture of collaborators, before joining the newly-minted Carl Rosa Opera Company as second tenor to Henry Nordblom, for three months.

Then it was announced that his health needed a warm climate, and of all places he chose South Africa. People died of the weather down there!  But Mr Turner didn't go alone: he took what was called an Opera Company. This was it 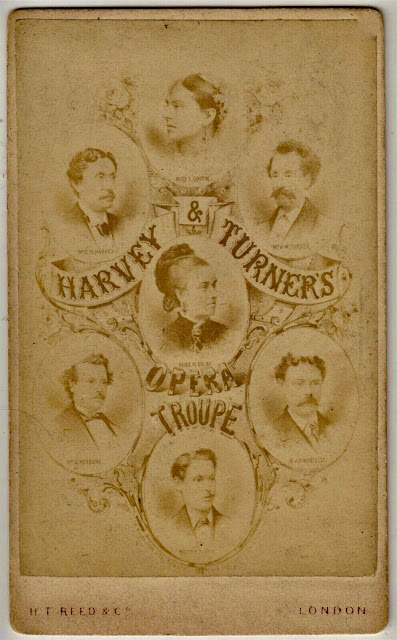 That's him, with the droopy moustache top right. He don't look terribly well, I must say. Underneath him is a friend from Oxford Music Hall days: the bass known as 'T J Montelli' (1826-1912) who had also been part of the Alexandra Theatre fiasco. His real name was Tom Horne, and he would have two decades in the theatre, more than half of it with D'Oyly Carte's companies. As well as being a grocer.

The contralto, on the top, was a lass who called herself 'Louise Costin' who had also worked with Turner (and Montelli) on a number of occasions -- the Sunday Evenings for the People at Freemasons' Hall, in a little concert party, at the Alexandra. In 1874 she had played Harry Homespun in Robinson Crusoe at the Standard Theatre. Now she was to sing Azucena.

The lady in the centre, Miss or Madame Maria or Marie Dolby, (RAM), was a little more experienced. But not a heap. I see her in the annual Irish concerts mounted by the eccentric Miss Berry Greening between 1868-72, occasionally in the amateurish concerts at Store Street and the like, and teaming with Alfred Plumpton in a little Entertainment, billed as 'of the Lyceum Theatre'. I see her billed as Madame giving a concert at the Westbourne Hall  (1 July 1872) with Vernon Rigby, Lewis Thomas, Messrs Guy and Wadmore (RAM) and Marion Severn, and Randegger at the keyboard. I see her as principal girl in Jack and Jill at Crystal Palace, and singing Athalie at Ealing, operetta with J Finlay Finlayson ... and then she appears not only on Mr D'Oyly Carte's client list, but in the Henry Neville company at the Olympic. She played A Game of Romps with G W Anson, behind Teddy Righton in a burlesque of Richelieu ('little to do but look pretty and wear clothes well'), and when Much Ado Without Nothing was produced, she played Balthazar and sang 'Sigh no more, ladies'. She sang in Randegger's The Rival Beauties at the Bijou Bayswater. Now she was to sing Leonora and Marguerite to the diamond-miners of Kimberley.

A little suggestion in a Sutton Coldfield (Turner's home) newspaper made me wonder ... were these ladies, perhaps, the wives? Was it simply a family troupe? Because the fellow bottom left is labelled 'C Herbert[e]'. 'Henri Herberte' was the pseudonym Turner used when he sang in Australia and America. Yes, this is his brother, Charles Turner, who would go on to be a successful operatic tenor in his own right, in companies with his wife, Annis Montague.

Right. Montelli had a wife. He'd had one since 1856. She was Ann née Paine from Richmond. And by 1875 they had six children. I don't think she's a candidate.

Turner has a wife, too. Emma Pendleton or Cowpe. She's from Sutton too. There she is in the 1871 census at 11 Stonyford Lane. Oh. But Maria Dolby is down in London, visiting a Louisa Disher. So: red herring.

I suppose I need to find out who 'E H Harvey' is ...  well, I suppose he's the Edward Henry Harvey of 'E H Harvey's Comic Opera Co' from Philadelphia, featuring Maud Branscombe in 1879. And running Harvey's Midgets at the Piccadilly Hall in 1882. 'Wanted, living curiosities of every description'. 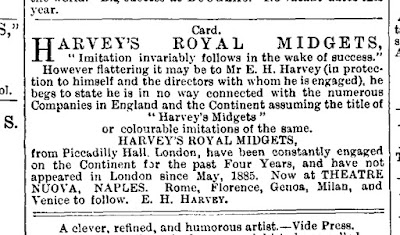 Still into midgets in 1889! Touring a minstrel troupe in South Africa in 1894. Doesn't seem to be a performer. Just a manager. But maybe he had a wife. Yes! He did! And she was the prima donna of his double bill (!) Pinafore/Sorcerer company at the Lyceum, NYC, in 1879 ... 'direct from London'. Singing Aline.
Well, not quite direct. There she is in January 1879 singing 'Oh, how delightful' with Gilmore's Band at the Grand Opera House. And the following September singing Josephine to Haydon Tilla's Ralph at the Aquarium. And I suppose that is they at 58 Victoria Rd, in Willesden in 1901, he born Rochester, NY 'stockbroker's agent' (62), she born Bayswater (55). In 1911 he is now saying he was born in Montreal. She is a retired vocalist and teacher of music. Married 1875, no children. Edward died in Willesden in 1923. Well, that's one wee mystery solved. And that's why she got her photo in the prime spot! I don't suppose we'll ever know her real name. Buried in the marriage records of Durban or Kimberley?
And Miss Costin? Well, that one seems to have got away. And the bloke at the bottom? Well, he'd have to be a baritone. Otherwise there isn't one. Conte di Luna? What's his name? Is that Walter ... Hyde? Yes, it's Hyde. But obviously not the Walter Hyde known in the 20th century ...
Well, mission at least partly accomplished. That'll do for now. Amazing bit of ephemera!
POSTSCRIPTUM: My friend David snapped this card up and sent me this improved photo: 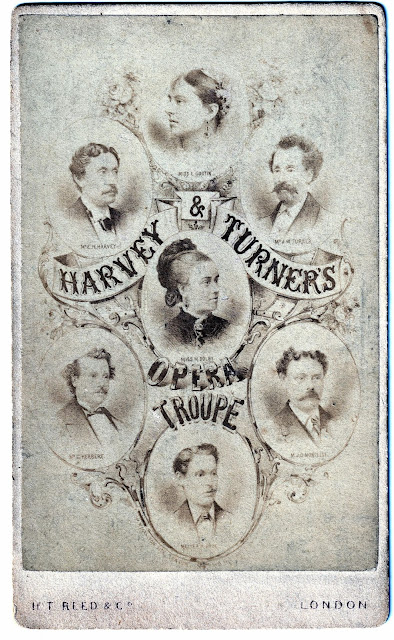 and he says its 'Master F Hyde'. How odd.

Posted by GEROLSTEIN at 1:19 AM