I was inspired to that thought by this picture 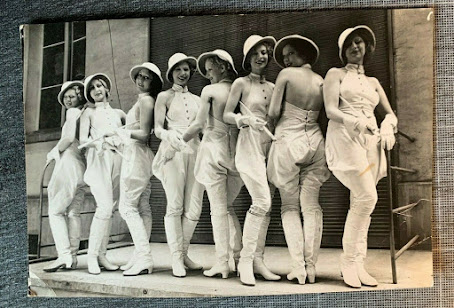 When? Where? Are they stage chorines or filmland lasses photographed outside the studio door?  As Noel Coward sang-spoke 'I wonder what happened to [her]'.

This one is easier to date. London publicity picture for probably the Windmill ... chorus of four? 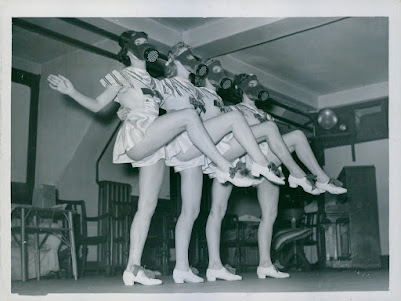 Or maybe in Cicely Courtneidge's bunker ...?
Then, of course, there is this little lot. Pre-dating, largely, both of the previous. I more or less know the date and show, King of Cadonia. The days of the Gaiety Girl, whose dancing repertoire might have stopped at step-ball-change, but who could sure wear a gown and strut her stuff! 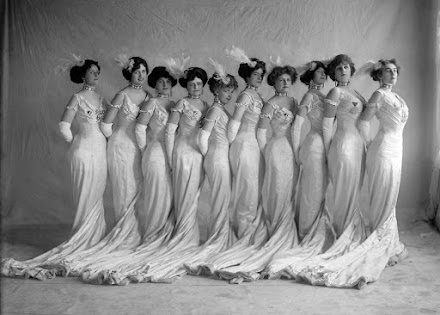 Well, as an experienced conoisseur of putting together chorus lines, I would ... instantly make no1 (from the right) head girl. Renew the contracts of 2, 5, 9 & 10. Pluck no 6 from the chorus, where she should never have been, and put her in a Rosie Boote role ...  others, take lessons in deportment from your head girl! 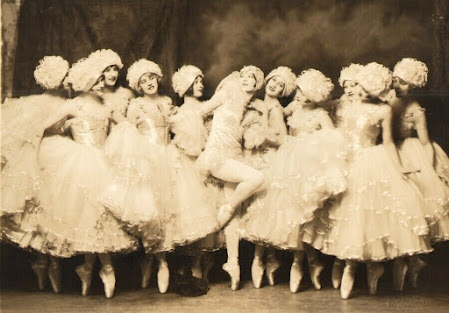 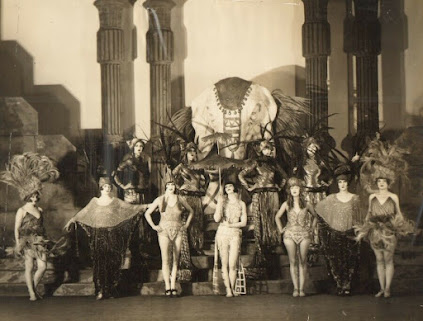 Hmmm. Not a beauty chorus, I fear ... Head girl would probably be the elephant ... 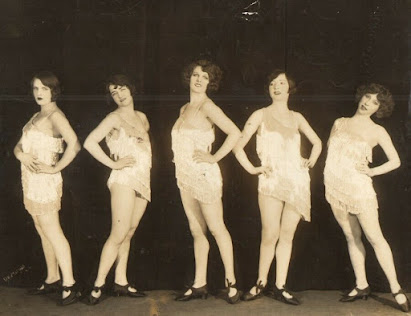 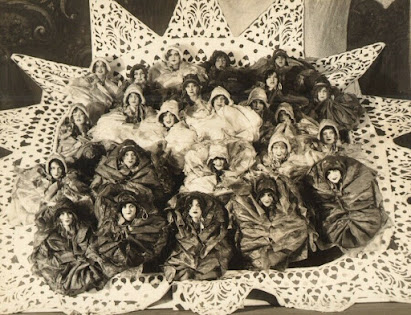 No budget, no hemline? I wonder which are the hard centres ...
I find this lot a little tasteless. A parody, maybe? The back of the photo gives instructions for costume making, in French and later in English. Since no-one is credited with costume designs for this show, I would guess they were indeed second-hand. The piece was, I believe, a hotch potch with which its creators had been entertaining the troops in France. 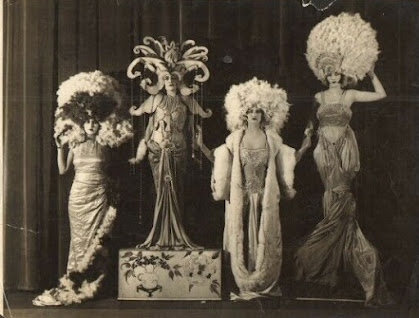 This one wouldn't have needed much ripping-off .. 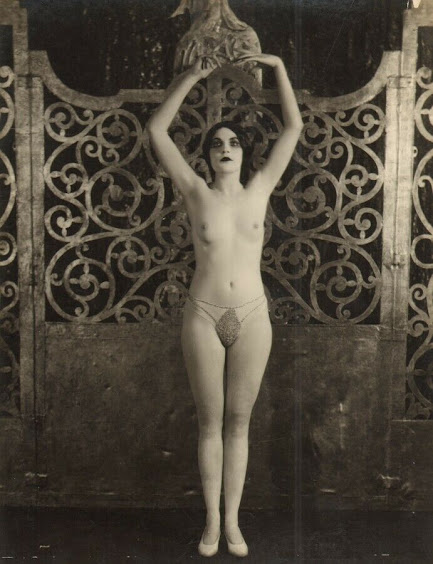 Anyway the Will Morrissey/Elizabeth Brice "revue" Toot Sweet that they were used in was a New York 'bust up', so it was a lot of stitching (or in the second case, very little) wasted.

I think this one might be from a moving picture. The 'scenery' looks rather permanent for a stage show 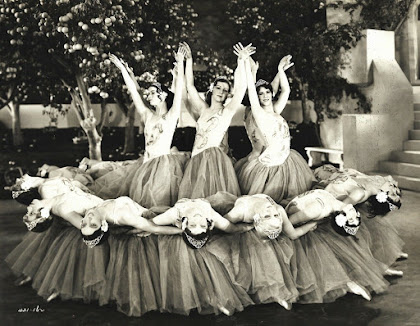 This Mancunian lot may be the youngest ... 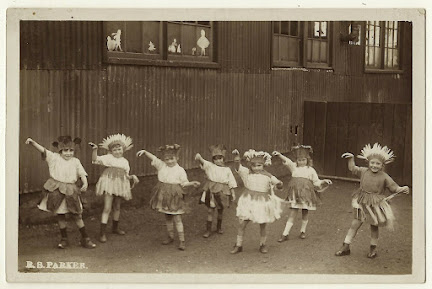 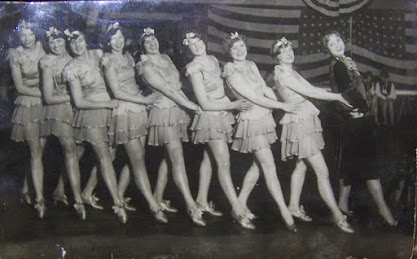 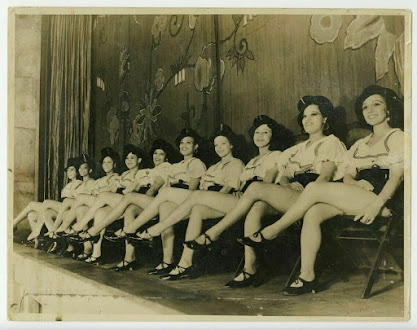 No idea who this bunch of bored scrubbers are .. 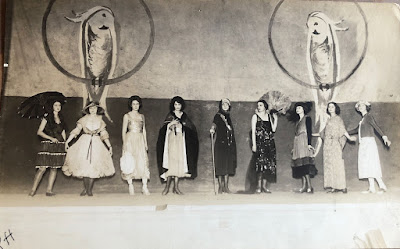 These lasses are from the world of "revue". These two lots are prom Paramount Pictures stage shows, groups of girls who were used for decoration when a film needed some background performance or other

And this one is from a wilfully titillating show staged by Mons André Lasky (Andrei Laski from Goshinin) as 'The French revue' for the vaudeville circuits. As the critic noted it was 'more revue than French'. Just another girlie variety show. 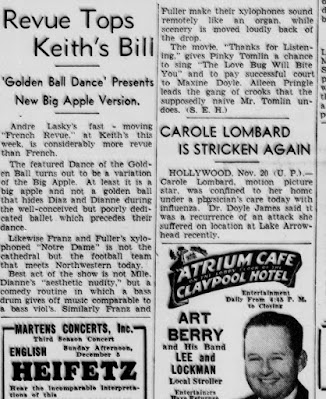 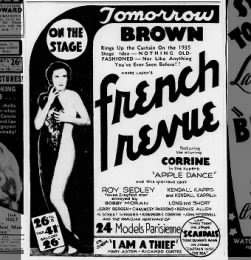 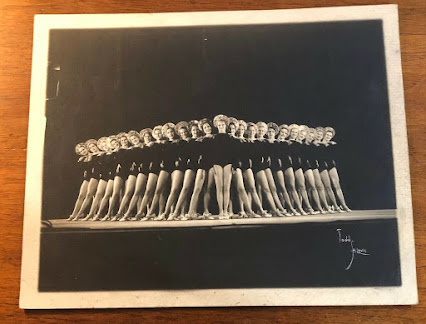 . This cute group is from Earl Carroll's 1916 West Coast musical Canary Cottage ... which went on from its San Diego beginnings to showings in New York and Australia. I see this photo is by an SF/LA house, so I imagine this is the original cast. 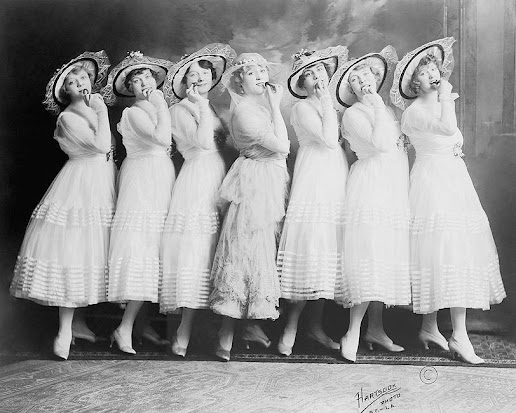 Posted by GEROLSTEIN at 6:50 PM