I have never heard Ebenezer Prout's cantata, Hereward. Well, the heyday of choral groups has passed, and the composition and performance of cantatas have, sadly, become a rarity. Unless they have a name such as Mendelssohn or Sullivan attached to them. But in Victorian days, every composer worth the name turned out such pieces; the great music festivals commissioned them, sacred and secular, from British and foreign writers; choral groups nation-wide, from the grandest ones in the big cities with their professional soloists to the small village societies, performed them ...

But, fashions change. And fashion hasn't been enormously kind to the legacy of the very worthy Mr Prout either. His didactic works -- much admired in their time -- are referred to only by specialists; his work as an editor, examiner, and adjudicator, a teacher in both England and Ireland (Hon Mus Doc, Trinity, Dublin), of course, died with him; and his compositions -- symphonic and choral -- don't get much of a hearing. Even his long-definitive performing edition of The Messiah seems to have been bypassed. I see some of his orchestral music has made it to youtube, but, alas, not the cantatas: Hereward, Alfred and The Red Cross Knight. 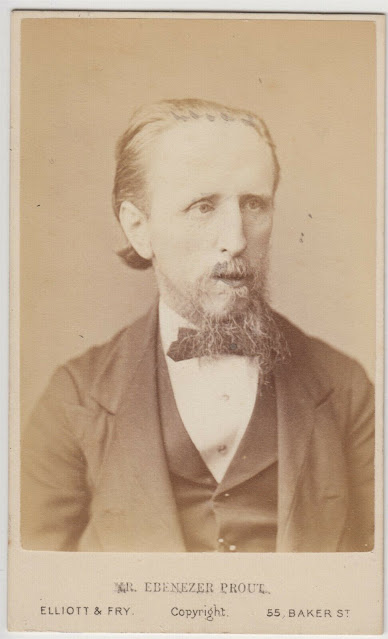 But Ebenezer has been written about muchly, even if he has not made a home in the general consciousness as the Mendelssohns and the Sullivans have, so I shall not repeat his important professional history except to say that, in 1876, he was appointed as musical director of the Borough of Hackney Choral Association. The group was highly successful. I see that in 1878 they performed, amongst such works and Mendelssohn's Midsummer Night's Dream music and Weber's Jubel, Schumann's Faust music with soloists including Clara Samuell, Irene Ware, Lottie Reimar, Elizabeth Bolingbroke and Sydney Tower; and in the second concert Annie Marriott, Frederick King and Frank Boyle from the National Training School were featured. The East End choir had made its mark quickly. And it would soon make it even more thoroughly.

Prout had, for many years, been a piano teacher at the Crystal Palace, which I imagine is where he encountered William Grist, schoolmaster, language teacher and writer, who was involved with the annotation of the Crystal Palace programmes. Grist, the son of a Norwood grocer, came to theatrical notice with his adaptation of Mozart's L'Impresario for the Palace in 1877 and he would go on to write and translate libretti for A C Mackenzie (Jason), Henry Gadsby (Columbus), the Carl Rosa opera (La Juive &c) and Alice Barth, as well as for Prout. But libretti didn't feed the family. He tried his hand at secretarial work, journalism, and latterly took a job at Brock's fireworks factory, but when he died at the age of 56 (19 November 1896) he left but 42L to his family. One daughter married a member of the Corri family, another played with the D'Oyly Carte companies as "Minnie Harrold".

Grist supplied the text of Hereward, based on Kingsley's novel, for Prout to set (opus 12), and the result was highly positive, for both composer and libettist:

The critics were very largely in favour --  "Hereward is an honour to native art. We point to it as a good thing achieved .." (Musical Times),  'a really clever and musicianlike work', 'a good specimen of honest workmanship wedded to considerable imaginative powers' -- with the choruses, particular, winning enthusiastic praise. Only the odd critic was found who hissed that it reeked of 'the modern German school', 'recalled Mendelssohn', or worst of all, in its use of a couple of leitmotifs aped the unspeakable Wagner. But the German papers spoke of the 'sehr günstiges Erfolg' of the work ... 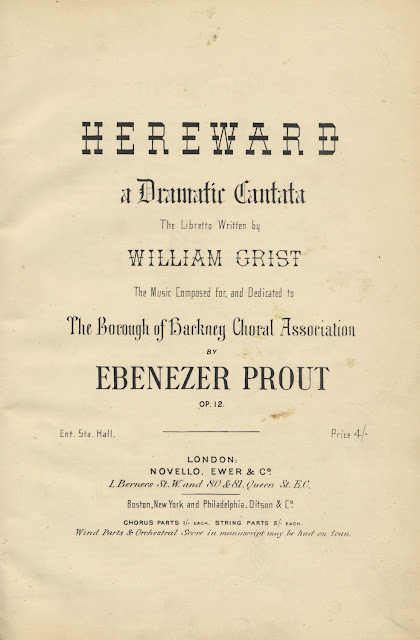 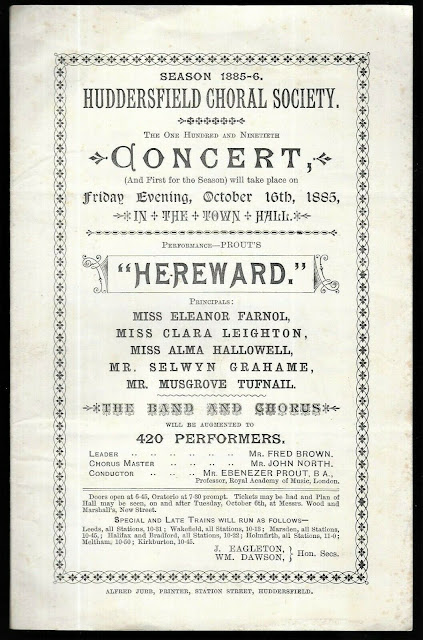 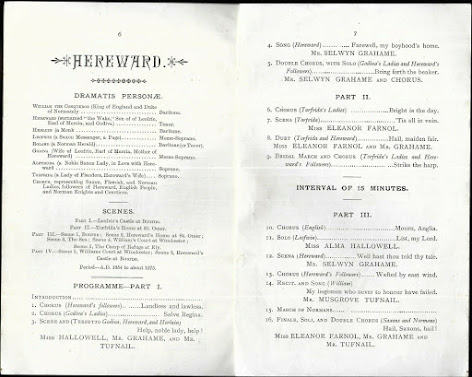 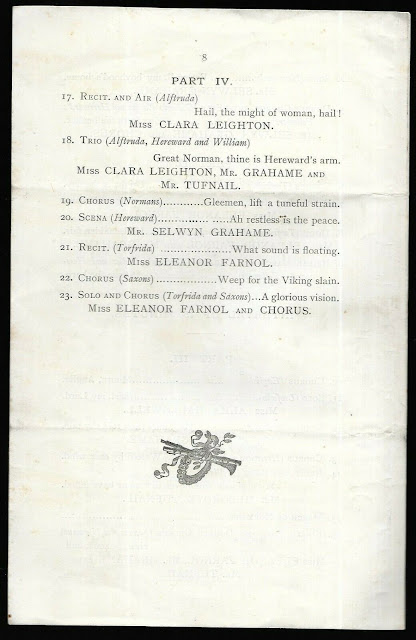