One Day in Guernsey

I had determined that, this time during my stay in the Channel Islands (or les iles anglaises de Normandie as I now discover the French rather sadly call them) I would adventure a little further abroad than before. That I would explore more than just the roads of Jersey. So, this morning at 10.30, I boarded the Condor fast ferry at Elizabeth wharf and, whoof!, in fifty-five spume-filled minutes, there I was standing on the waterfront at St Peter’s Port, snuggled in my polar fleece (the first time its come out in 3 and a bit months since New Zealand) staring at a grey sky and thinking, OK, what now?
Now, I walk. I have five hours and a quarter before I need to be back here for the 5.30 return ferry. So, as usual, I walk. But where?
I had an open mind on Guernsey. I’d had opinions ranging from ‘just one big hill’ to ‘I like it better than Jersey’ to the local publicity that claimed it ‘the happiest place in the world’ and lauded its combination of natural beauty, well-preserved architecture and modern financial whizzery. Well, the natural beauty clearly must be in the countryside, for it isn’t in St Peter Port. It’s a perfectly nice portside town, glued attractively to its hillside with its buildings seemingly cuddled together as if to keep warm and to hold each other to the slopes. Nice buildings, too. That good solid C18th and C19th (and even early C20th) architecture that held sway before the age of the disposable building. As in Jersey, too, people mostly look after their houses. Street after street along which I strode was lined with immaculately preserved houses of earlier eras and, needless to say, the further one got away from the waterfront and its cobbled streets of shops, they better and better they got. 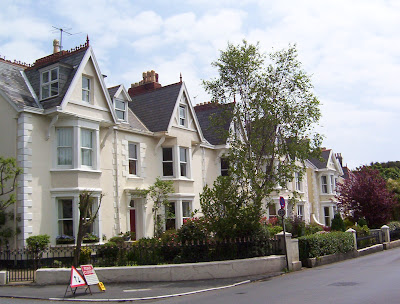 St Peter Port is fun to wander around. The old part anyway. The other part, which I presume is the part inhabited by the financial whizzards, is all down one end of the town, glittering in its rows of square grey boxes and smoked windows. This area is protected by a large road, with fences along it at any place where a pedestrian might like to cross, and no crossings anywhere. It says ‘keep out’ all too obviously, so I did.
Instead I wandered. Upwards. I passed the Candie Gardens, the little modern Museum and Art Gallery (and Café), and was tempted to try the History Library at Priaulx Library (a fine old building), but instead I pressed on. My first find was the Victoria Tower, a delicious piece of memorial nonsense put up to commemorate the young Queen’s ‘surprise’ visit in the early 1840s. Behind the tower is a pretty park, with nice benches, and two First World War German fieldguns. The Channel Islands are big on war memorabilia (funny, I’d prefer to forget), but this one was a bit much. In the second war, the islanders buried these ‘memorial’ guns so that the Germans wouldn’t destroy them, and in the 1970s dug them up and restored them to their place in the park! 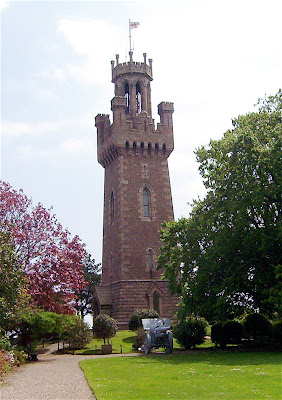 I took a pause in the park to plan my routes, then, after a peep at what is surely the loveliest fire station in the world – a row of old stone arcades each holds a nice red engine! – I pressed on. I didn’t know then, but the fire station was typical. Guernsey has found a way, in some splendid cases, of re-using its old buildings, tactfully converted, for modern activities.
It has also committed just a handful of horrors. The 1789 Holy Trinity Church stands on attractive Trinity Square where there has already been, of necessity, some tactful rebuilding. But the Christian Powers That Be have attached to the C18th church a modern excrescence of such ugliness that I could only stand and gasp. In a town where so much seems to have been done to keep the character and style, if not necessarily uniform, at least ‘of a part’, such a crass bit of tastelessness! So sad.
Especially when, just a little way down the road, you come on the old markets with their 1822 arcades, restored by the local council with an expert hand. For behind the graceful arches, behind the grandiose façade is installed an HMV store with its pink fluo sign, inside another C19th portico is a supermarket, with an advertisement for a special on honeypuffs peeking out. Beauty and utility perfectly combined. How to take an old building, the use of which is past, and reuse it for something else. 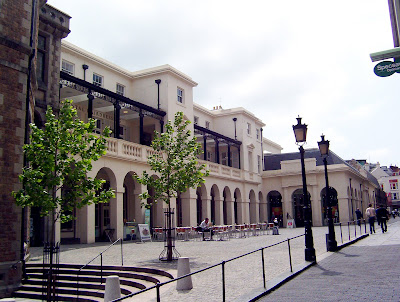 Like any self-respecting channel port, St Peter Port inevitably has its guardian castle. Shivering somewhat, I headed out along the causeway into the ocean to give it the once over. Yes, it’s a castle. And it now holds a multitude of exhibits and events. There were 500 squealing schoolchildren milling around the shop (which is the first thing you see after entering the ancient portico) so I decided I would make do with the castle exterior. I took my photo and re-traced the causeway, and began to feel like something warm inside me. 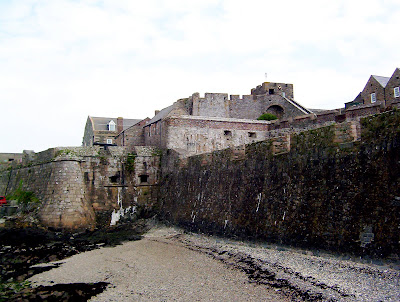 But my hours being limited, I pressed on.
Posted by GEROLSTEIN at 2:15 AM